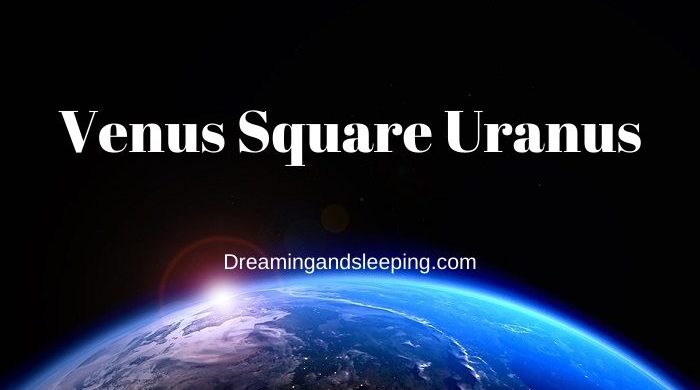 So many problems can come out of this square position, and this is the aspect that is mostly dedicated to those who are troubled in love (it is not hard to see why since the planet Venus is in the picture), and with the square position, then things are even worse chaos in translation.

Indeed this aspect knows to be arduous and difficult, and a lot of emotional conflicts and discontent could flood though people who have this aspect in their charts or when this aspect is active.

As Uranus is all about changes and why not, the chaos, everything suddenly goes like thunder from a clear sky, and the planet Venus just adds up to the difficulty of this process, because emotions are present.

The Uranus-Venus square is in the picture of the disagreement or a severe conflict of principles of these two planets.

Mostly, this square position means that people are in conflict with ourselves; we do not know how and what we want, but we could lean to our emotions to guide us. Read all about this interesting position, and mostly in the synastry.

In fact, this is the square position that is connected with the inner needs, most people who have it want to have a deeper relationship with others and with themselves, but if that relationship can look perfect, we should see each other, but not all with a bigger commitment, but a relaxed one.

At times this position gives something that is more relaxed they don’t accept it as easily because they are too possessive and make a mess of everything.

So, in this example, you can see how much discrepancy there is between inner desires and reality that often show something else, something that is more sinister. And some say that this aspect between Venus and Uranus is the one that people who have it tend to lie to them and live in the imaginary world.

If they are able to direct this imagination and emotions into the work and progress, then this square position can have its good side. 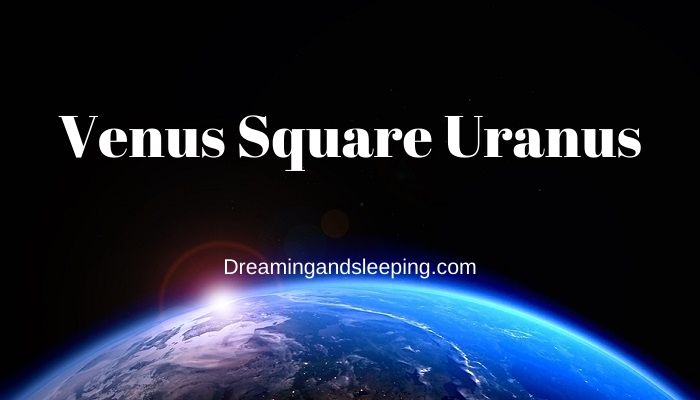 People who have this position in the natal charts are seen as those who have a true desire for freedom, adventure, and they are those who love exploration but can run into a problem in their present relationships, which they tend to break because of less important adventures or connections from the past (they do know that they are enjoying some good time).

At present, the present relationships can give them great enthusiasm, and even if they disappear, in that case, they better accept the change that is coming their way.

They are driven by emotions, and they want to have everything they want, they want something exciting every day, and even if they cannot have it, they will imagine it. And you can just imagine their inner world, the one that pushes them into new and exciting adventures.

In many cases, people who have this aspect in their natal charts are those that are submerging into the imagination, and in fact, they are fooling themselves, making the problem of both the scene and the need and without because we are doing everything to destroy it.

Someone consciously and someone not, but this is one of their traits, but we must say that in the first case when they do it consciously, they have a chance to change it, and in the other case they do not.

Because of it, they can expect sudden upward turns, divorces, breakups, fraud detection, and often their lives are filled with secrets will come to light these days, and those secrets will make them disappointed, more than anything.

Here we come to one of the most important negative traits of this square position – people who have this it likes to be in secrets, not to share everything with others, they often lead secretive lives, and it often represents their downfall.

Another trait that this square position brings is their actions that they are directed out of spite. It is important for all of us to know that the planet Uranus can be an extremely stubborn planet, and the square is by its very nature defiant and illiberal.

The fear of rejection and emotional attachment is present, which is not unusual, but difficult to acknowledge which is a major problem to them. They often disguise with a disinterested and slightly arrogant face, even if deep inside they are everything but that.

Rules are often violated, they even hate them, but sometimes it’s just a front of others, when they are alone they “speak” something else, but in any case, such life makes a lot of confusion, and it is unnecessary.

They are even prone to pull back if they feel that they are becoming too familiar, in fact, they do not want to identify with a public image of one and begin to act as a walking monument. Even if they do not, they act like they are doing something incredibly important.

They believed they were necessary, and this is not healthy by any mean.

Freedom is of paramount importance in the lives of all people who have this square position in their charts. But because of the planet, Venus is in the picture, and they are those who are able to build intimacy and fidelity if needed, they are not cheaters and are very loyal.

They are even able to be in a long-distance connection, and they do not bother them, on the contrary, and they are highly desirable because of the uncertainty and excitement they carry

.  Love in absence is just fine for those who have this position in their natal charts, and often it’s a great safe place or cover. In fact, like it or not, they will never have “regular” formative relationships, especially not those 24/7 or “and they lived happily ever after.”

Usually, nothing that is formal in life and love do not interest them, they even escape from such life, but the problem arises when they should decide where and when they will settle in life.

They see love and love affairs as a momentum – we are together now, everything is wonderful and maybe in the indefinite future, because who knows what tomorrow brings? Only without conditionality and commitment, and remember their freedom must not be jeopardized.

All of their lovers must know that there cannot be any suffocation and silly questions filled with anger and jealousy. If they just feel that their lover is trying to reveal something that they do not feel comfortable revealing, they will not just pull back, and they will hit them with anger and rage.

In synastry, when this aspect exists, all love connections are suddenly formed, they are turbulent, but they can last when you least hope. The beauty of uncertainty is certainly guaranteed: for both the good and the bad. As soon as something starts, it can also collapse “overnight.” Get ready for the oscillations of dizzying highs and lows, as there is no security or motionless.

In synastry, it is very hard to strike a balance between the desire for intimacy and, on the other, freedom; between traditional and urban values. Both desires are present and must be harmonized in order for the aspect.

At times, if dreams of family and traditional values ​​in relationships, it needs to be protected by a partner who is affectionate to it; who will watch over her when she has a cold and whom she will always be able to rely on.

Here we can see a lot of insecurity that is accompanied by a howling and sometimes dramatic crying session (its emotions/states). Their partners, because it’s easier for him to adopt other people’s helmets than to decide on his own – so they can instead of gaining some confidence and freedom, to lose it.

For these people, it is not important what anyone else says, and any wrong comment of their world can provoke an additional revolt.

It is important that they do things that are not boring; they need to have rich material because Uranus can’t stand if something is not active and interesting and new.

They want to bring something new every day, just so they can’t get to “grasp” all the details and recount.

As you know, they want to do something that no one did before them, and they are eccentric and unique. As such, they draw attention, attract labels or condemnations, and even if that hurts them inside, they like it very much and will never jeopardize their work.

Weird things are weird and well-loved, and under the influence of Venus-Uranus, there is a tendency toward surrealistic expectations of life, and therefore in work, but we must say that such tendencies can lead them into the progress that is beyond every imagination.

The only thing that will ensure their success in work is that they find out what are their top priorities, whatever they choose, they should try to stick to the choice for as long as possible (this is a big challenge now) and do not mix concepts (after the selection). Just if they can learn to follow one idea, one goal for a longer period they will be much more successful.

The square of these two natures (Venus and Uranus) that are in many cases so different one from another will bring conflict of interest to both planets, and it will be manifested through emotional inhibitions, aggression, exaggeration, excessive need for freedom, lack of understanding for other people’s needs, sudden decisions about work, ideas, love, as well as uncertainty about the consequences of this decision.

So, challenges are present, but we are not saying that they come without some rescue net; there is a chance of overcoming such disturbances, and at times, the progress that comes right after is much bigger.

There is a need to do something new, to change the established pattern of behavior for a moment, but it is done in a rough, disinterested and socially unacceptable way. Venus is cold in this aspect (but it does not have to be for a long time), it is not interested in other people, but the touch of Uranus gives it charm, charisma and magnetism.

Given the planets that are in the square, conflicts can concern money, business, and organization, especially structure and discipline. Partners do not behave as we would like, so in the touch of Uranus, we will make decisions to correct these behaviors. We have a desire to be loved, but we have no patience.

Here, Venus becomes sensitive, passive, confused, while Uranus converts eccentric, dangerous, and overbearing nature. In this aspect, rules are imposed but not accepted.

Now, the big question is, what should you do when you know that this aspect is active? You should know that it is an aspect of tension; it will give rise to conflicts in emotional relationships.

Relationships with friends will not be satisfactory either. It is about the fact that Uranus is rather volatile and rebellious in nature, does not admit anything regulated, standard, and does not admit rules.

On the other hand, it is important for Venus to connect with people, to be loved, accepted and in harmony with the environment.

As usual, we must say that the most important thing for people of this aspect, and for all those who are aware of its impact, that in all of us, there are two sides that conflict each other, and the one you “feed” the most will overrule.

So, think of the ideas and needs that will benefit you in a longer run, not just at the current moment. There are beauty and joy in this aspect, and there can be significant rewards, even when this square brings a conflict.