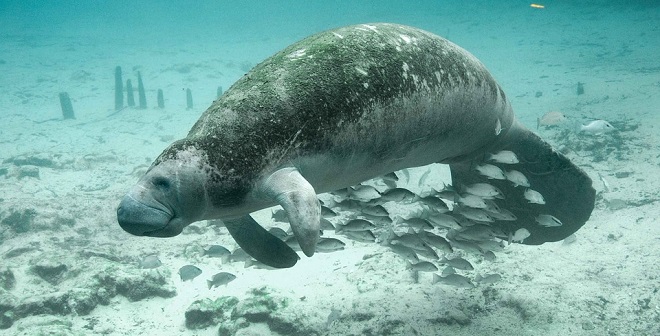 Manatee, or sea cow, is a gentle giant that lives in coasts near Africa, North America and South America.

Civilizations that lived near coasts where these gentle giants swim, soon realized how kind and precious these animals are.

Kind – These giants are kind and devoted to humans. People can get close to them without being afraid of them.

Manatees are vegetarians so there is no real danger coming from them. Sea divers often swim next to these gentle giants and study their behavior closely.

Intelligent – Manatees might look naïve but they are quite intelligent. They are able to understand discrimination tasks and also learn complex behaviors.

Their behavior is very similar to dolphins and pinnipeds since they use acoustic and visual communication.

Manatee as a totem

If you were born under this totem or if you are protected by it, then you are a kind and loving person.

Manatees are symbols of kindness, love, peace, communication, exploration and connections. You are someone who like having a close bond with people but you don’t like being in a large group.

To you, small groups that involve your friends and family are the ones you feel the most comfortable in. you like sharing your emotions with others and you are a gentle partner and friend.

When someone comes to you for advice, you gladly listen to them and give your honest opinion about the problem.

This makes you a joy to be around and people who have you in their life are truly blessed. You are not naïve in any way and even though you are kind you know how to stand your ground.

Striving for success is something that is in your blood and you will always test your limits.

You want to see yourself rising to the top and reaching new high grounds over and over again.

People born under this totem are born to be social workers, teachers, psychologists and doctors. They understand people’s problems and connect with them deeply.

Their only negative side could be their pacific nature. Sometimes, in order to escape conflict, they are ready to let things be as they are and avoid fighting against it.

Manatee as a symbol in a dream

As symbols in a dream, manatees can bring us positive and negative messages. If you saw a manatee in your dream, then this dream represents your passive behavior.

You probably gave up on something too easy and now you feel guilty because of it. If it is not too late, then try turning things around and make them go to your favor.

If you were swimming next to a manatee in your dream, then you are a warm and gentle person. Everything you do in life is motivated by love and kindness.

People love you because you are always there for them and ready to help at all times.

If manatee had a baby next to it in your dream, then this dream represents self-love. You should take better care of yourself and give yourself a break after hard work.

Manatee as a symbol in different cultures

Manatee’s symbolism was highly influenced by its behavior. Ancient cultures that lived next to them, studied their behavior and got to know their personalities.

Killing a manatee in certain tribes in Africa was considered to be a crime and was even punished by tribe rules.

In popular culture, manatees are not often used as symbols. In one episode of South Park, manatee was featured as one of the characters.

Even though manatees were once known by cultures that lived near African and American coasts, we can now see them around to world in captivity in sea parks.

People call manatees gentle giants because of their kindness and intelligence.

Because of this special relationship with humans, their symbolism remained positive for centuries.