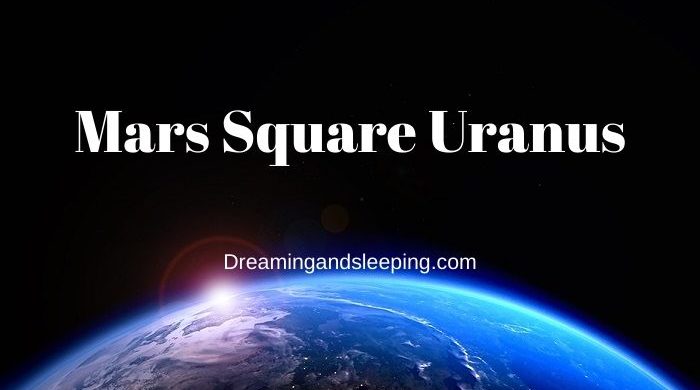 In this planetary marriage, we get to witness a mixture of something truly amazing – since one brings the energy and dynamics, pervasiveness, combativeness and another brings new ideas things that are unusual, fast and current.

What is common to Mars and Uranus is that they are both triggering something, and what they are triggering in this square that is very difficult as it is, also depends on other aspects in the natal chart, and also in synastry (maybe even more).

In this case, we have the character or relation of the square, when the relationship of the planets are at an angle of 90 degrees to each other, thus producing a very strong concentrate of latent power that is necessary when changing more dilute forms of energy into real and solid material.

The representations that are seen in the perspective of the square between Mars and Uranus act like two wheels going in separate ways and assemble at the crossing, considering that each has the right of priority over the other and not wanting to stray. This is the situation that most often causes conflict, and you should look at this position from this perspective.

We do not use the words good or bad conflict, but we recognize that the conflict is present and that something will come out of it in some way.

When Mars and Uranus are found in the square aspect, the desires and needs that are symbolized by Uranus are not consistent with the way we realize them, which is the symbolism of Mars (it is always the manner, the way how we do some things in life, not things as they are).

It causes people to want one thing, and then to do something completely different, which in turn leads to the inability to accomplish what is wanted, which is a complete waste of time and energy.

As everything under the influence of the square goes too fast to be able to prepare it in our knowledge and experience what is occurring to us, we are not aware of the fact that we are doing something inadequate, and then we are very frustrated by the failure that is imminent. 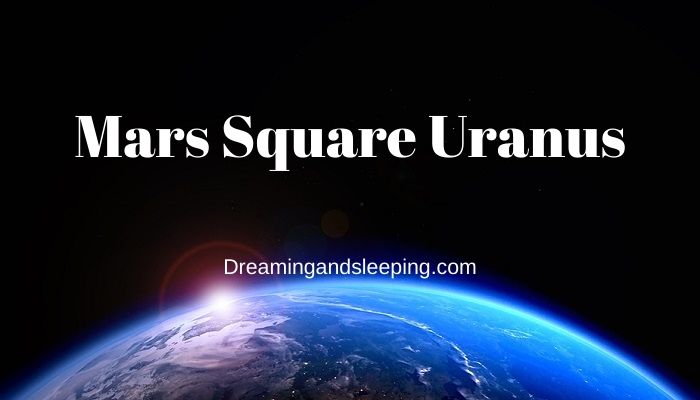 But, we must say that those who have this position in their charts can find an indirect way of resolving a conflict represented by a square, they diverse the energy they are handling it, and in this way they can lead to safety and resolution.

In this case, we have a very strong, explosive energy created by Mars and Uranus in a square setting, and there is nothing that is compared to this power.

This inevitably creates in each of us an irresistible need for impulsive action (we want things right now at this moment, and there cannot be any delay, or we will be angry), so the control of that energy is mandatory if those who have this aspect want to have “normal” lives.

Some of the famous people with this aspect are Dean Martin, Jack Kerouac, Richard Simmons, Wolfgang Borchert, Robert Hooke, Julie Gayet, Alexander Graham Bell, Giacomo Puccini and Niall Horan. Maybe you do not know all of these names, but we assure you that all of these names have amazing backstories behind them.

One fact is maybe not so know, but it deserves to be mentioned here – both Mars and Uranus act quickly and suddenly, and those who have this aspect always want to realize their ideas immediately and directly.

They do not want to leave anything for later, and they want everything right now. If they mature enough, they are able to take off slowly and climb an elevation, staggering and jumping into an empty space, and still try to manage the entire process, very successfully. And when they are able to do, their results have a long-term consequence that affects many people.

Now, one trait that is even more obvious is the energy that comes from mars, and people are blessed with mobility, combativeness, dynamism in all aspects of life, and not just that, Uranus here allows them to bring new ideas that are in a first-place unusual and too fast, but are well received later in life.

In them, and you have guessed it, is that both of them have the desire for freedom, they do not like restraint in any aspect in their lives, from love to work.

Also, those who have this position in their charts carry one of a kind carelessness in everything they do, and it is what makes them charming to the core.

They seem that they do not have to try and put effort into anything they do, but when they do it, they are doing it with all of their power.

This picture of a planetary position is also known for creating intense frustrations that turn into anger, and all of this makes a perfect sense since there is too much physical energy that alternates with action and excitement drives these people into unreasonable behavior.

What this could also depend from all other aspects in the natal chart, but in some case, they could be managed.

At the same time, people of this square feel a very strong need to put their desire, need or idea into action, but since they are not aware of doing it the wrong way, they have the impression that we are disabled. In doing so, they are extremely impatient and intolerant – what is even worse, they become so insensitive that they are interested in is their own interests.

Mars and Uranus bring out the desire to accomplish what they want, on the other; they are the ones that feel disabled, restrained, blocked, and unaware that this is due to their unproductive and impulsive actions.

This is how conflicts and struggles begin at the individual level, as when two or more people interact with each other verbally or physically, and also wars and revolutions begin globally.

Some like to describe this square position as the one in which people have everything, but they have a hard time to do something simple – to breath (even if there is a lot of love in front of them, they would not know what to do with their emotions, how to direct them in the right way).

No matter how strong the energy (passion) this aspect creates, when they release it, which in most cases happens like an explosion, things calm down in a short time as the energy depletes quickly.

They enter into something passionate quickly, and they end it in the same way, in the search for something new and exciting. The essence of the conflict described in this aspect is that any altercation or conflict lasts briefly – they do not end their love connections for a long time, but they do it very fast.

But, when the dust settles, they often see a lot of damage that is not easy to repair, and that takes a lot of time and effort.

In synastry also, this aspect also brings the need that seeks a way to be satisfied, and an action that does not lead to satisfaction is applied. Because everything in a square happens at high speed, we get feedback from the environment that tells that they have failed, and since they do not realize that the cause of this is their wrong action.

So, in love also they build up the frustrations and think that they are hurt and that there is no fault of theirs, and that the easiest way is to enter a conflict with a loved one.

This is the main issue here – when we talk about the synastry and this square, there is a strong feeling to remove the obstacle (a current lover) that stands in the way as soon as possible.

You can imagine how this looks like – such actions lead to an explosive reaction and the application of force, in that case, everything breaks not just that love affair.

It is important to pay attention to the fact that such situations inevitably happen to us in life, but also to last for a short time.

The square is an aspect, whose symbolism teaches us the need for resolution, and in this case, the symbolism is the same, they are determined people who want to deal with problems and resolve them in a classic way directly and impulsively, and they want to repair the damage done after such a solution.

They do not oppose being bosses and team leaders, but it is advisable to them that they should find a mediator, usually a lawyer, whose task is to direct them to an adequate solution.

But as they do not have an adequate method, then they will look for it, and this is their biggest strength, they are able to find new solutions whenever they are needed.

Also, this square gives tremendous energy they feel in the form of tension and most of the anger will be diverted into something that will indirectly lead them to a solution – yes, we must say that they are the people who can rise above bad situations.

The main thing is that they direct their energy completely, not just partially. If they manage to do so, their tension will be greatly reduced, and it will be easier to find an adequate way to fulfill their business desire, need or idea.

Look at this square position as the strong combination or even a combat of actions and idea, and both of them are carrying out two strong energies (none of them will take the prime, they are match and equal opponents), which lead to an explosion (and in the same case as the big bang has created the life in the world) in the same way, this explosion could create something new, something that will become a carrier of good and productive.

It is just that, things in the Universe and also in our lives, things are not as simple as we would like them to be – there can be grown out of the pain and “death”.

On a global scale, all of us should be careful, and such a square could bring clashes in the form of accidents, suffering, and unreasonable behavior at work, break-ups, and turning friends into enemies, maybe some aggressive behavior in marriage – everything that is dear and meaningful to us, could break during this transit. And now when we know this, the advice for all of us is to learn the valuable lessons of patience and focus.

We need to learn to be patient and tolerant not just regarding to others, but also regarding to us, and the expectations that we put on ourselves, to practice meditation, to tire our spirit that is too active and fast, and the worst thing that we could do is to contain the anger in ourselves, not to allow it to rule us and our behavior and to engage the brain in everything we do, lest our madness lead us into very bad things, which, above all, can be fatal for us.

A square is always a planetary action that causes us to behave badly and unreasonably, and conflicts and rebellion are present (this is particularly true for all those who are born with this aspect), and anyone else who has it in transit or year should be careful.

But also have in mind that something good could be produced out of all this mess.