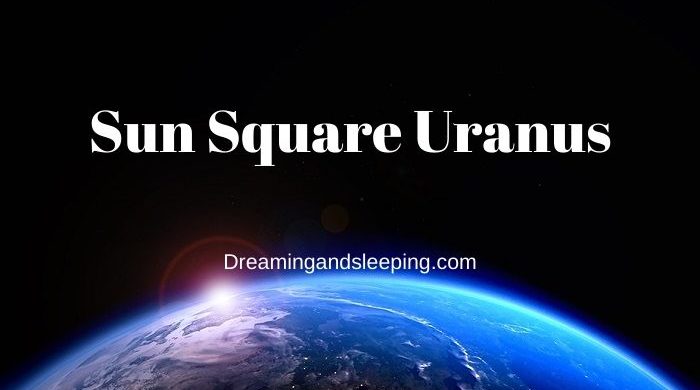 Any contact that is formatted between the Sun and the planet Uranus is so interesting because one is the representation of all origin of life and it is the bearer of the new.

It is associated with life and birth; in some ways, it is the centre of our world, both physical, but in natal charts, it represents us, who we are.

Both of them, in this challenging position that resembles a clash, affect the field of love and children, and in some later sections, you will see how.

It is not all that idyllic when the two planets are in contact because they are more often in conflict because of disagreements with society, authorities, friends, as well as because of disputes in love or with children.

You know now, from the start that this is a position that is particularly interesting in the realm of Synastry, but we assure you right now, that some great and unexpected gifts can come out of this square.

Any connection that Sun and Uranus make is interesting, but so many of them speak of the breaks and shifts, and when we say break it is can be seen the best in Synastry when another natal chart is present.

Astrologers say that is also the creative aspect since the planet Uranus gives its original ideas to the Sun while giving it inspiration that it has to direct in some way.

In contact with the Sun, the planet Uranus develops the need to be a complete self, autonomous and non-conformist character, which necessarily brings these individuals into conflict with anything based on traditional systems.

They certainly do not belong to those who respect social norms and rules, and what is even more; these people will set their own rules and affect others to follow them. 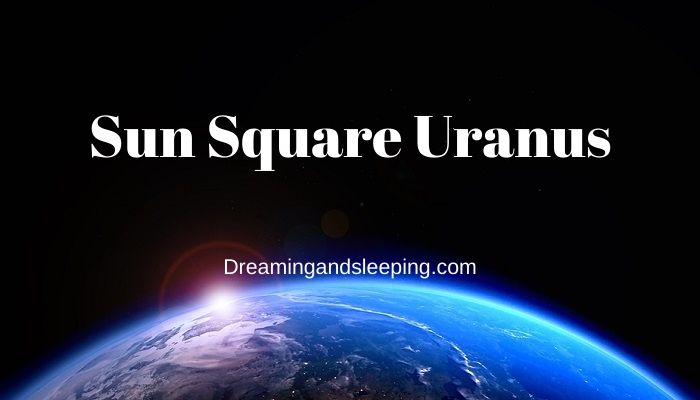 The square of the Sun with Uranus does not allow them to accept the requirements laid on them by community (education and social systems, laws), so they are unable to perform like other people, and this could be both good and bad at the same time, depending on which side you look at it.

So, as you can see, any rule that the society will try to impose on them, they will simply neglect it; they are always rebelling against the current situation and opposing anything they disagree with (even if it is a very young child, this trait shows for the rest of their lives).

These people will oppose anything that claims to limit their freedom, and the moment they feel the slightest threat that someone is trying to bind them to themselves or in some way restrict them, they are looking for a way to free them and escape.

The peculiarity of this aspect between the planets is that it does not contain the emotionality; rather this is pure energy that must somehow be released. And they can find a healthy and unhealthy way to do it.

And, even if the square position is challenging, we could say that this connection has its good side – it is nothing more but the strongest demand for complete independence in all the forms and applications of this term and something that defines the existence of these individuals. That’s their sense of life.

These people are not able to stop and are always looking for something new, which results in the disability to go out on one path alone, choose something individual to follow, but always go on, never stopping.

There is a constant desire for change in them, and this again leads with it a series of sudden and unexpected trades and situations, discovering new things, tracks, reading.

So, it all comes to the inner ability to learn, because if they are not able to learn, they will not be able to discover anything, and they will be unhappy.

But if they do, they will be able to become life winners, of course, this does not happen so often, but when it does you get with the richest person in the world, or with the person who made some world discovery, etc.

Others, in that attempt, failed miserably and they stay unrealized until the rest of their days, without any chance to make things great again.

It is very difficult for these people to live in the community or to achieve harmony (whether in the good or the bad aspect of other planets are in question).

On the one hand, they are those people who look at traditional and well-received things as an enemy, like something that will come to their lives and will provide some restrictive measures against them, and on the other, they constantly initiate changes that bring a sense of anarchy to the community and create a sense of insecurity and fear of unpredictability in their partner. And this is so important for all of us to know since their capriciousness further changes the overall situation in love.

They are the people who like to change, and the lifelong dynamic of these individuals as they are in a constant battle against attachment of any kind of limitation; simply they are not able to commit to just one lover, and therefore they do not have so many long-term lovers in life.

They are constantly striving for freedom, and they give up on love, or the attempt to love just if someone tries to speak about the boundaries.

But they also often do not know what to do with that freedom, nor do they know what kind of freedom they want. What often helps is finding a particular direction in love matters, the one that most satisfies the ego, or why something changes.

In the absence of this, the moment when freedom comes to achievement – disconnection occurs: they have left everything, and realize that they have lost themselves and destroyed many things casually, they have even damaged the person they loved.

Of course, they see all this when it is too late – so, in their love lives, there is always has to be a goal (someone they would love to have) a departure, and a direction for something to break or change.

The relationship between the Sun and Uranus (and square in particular) is the least beneficial when it comes to love and marriage because these people have their own needs and they are “allergic” when someone does not know how to fulfill their needs, but rarely anyone knows to do it, so they leave.

When a square is present in the Synastry, the person expressed by the planet Uranus will strive for independence and a fresh attitude along with the constant change.

Another partner may be too extreme and unusual, and most often, they will not be happy with the existing relationship. For marriage or love affair, the square of the Sun and Uranus in the Synastry gives disagreement, and these two people just could not get along.

In short relationships, intense aspects of the Sun and Uranus can give a flash of mutual interests to partners, but in the short term, they could not last, because they are incompatible.

Now, the completely different picture we can see when it comes to the work matters – it is such a positive aspect when it comes to discoveries and innovations that are necessary in business (often Sun-Uranus means genius, like in the case of Bill Gates or Galileo Galilei) as these individuals are ready to embark on experiments, eccentricities and adventures even if they do not know where they will lead them.

But if their energy is uncontrolled, unarticulated, anarchic and inattentive – a probable outcome of this aspect – then it creates a lot of problems for both the individual and his or her environment (family, partner or society as a whole) and causes destructive and explosive behaviors and outbursts of energy.

Then, they direct their creative energy in the direction that is not good for them or their talents.

The accumulated energy creates an internal pressure, which means that something needs to change, and then logic has no special influence, so it is necessary to develop a vigilant and rational consciousness in order not to destroy the acquired or achieved, and to create something new.

It always comes (sometimes several times) to the point where these individuals have to demolish and restore their existing state or start something new, and some of them are able to do just that.

This is certainly not good for a traditional conception of life, where the status quo is meaningful, but these people do not manage to fight it. And, in the end, they are always the bearers of new states – be it innovations or revolutions. It is only possible to articulate energy in order to direct it appropriately and maximize its positive use.

Now, what is the advice for all of us when we know that this aspect is active? First, on a global level, you must know that it brings the danger of sudden and drastic setbacks or severe disappointments in love life in particular.

It can happen that your entire environment will trouble you and that everything you have planned as usually will break and you will spend excess energy and all of that without any real outcome that will last.

Surprises come to the fore – although, at first glance, it may seem that the unrest and frustration of events will help your development, only if you accept them as they are.

Every attempt to change it will lead you even further. Take them as a challenge, an opportunity to learn something new, and that is the path that this square will give us.

Moderate your outbreaks of an oddity, avoid a bohemian appearance to the social section, your uniqueness will be at the pity of criticism, so don’t draw too much awareness to yourself.

Be careful as impulsive ideas can cause accidents, and you will be the one that will suffer the most.

This square position is known for bringing sudden obstacles to making plans, fewer difficulties, and sudden dissonance in love life. This transit announces a period in which our mental qualities are subjected to a test of firmness and stability, and those who can endure it will hit the “jackpot” big-time.

Sudden and unexpected, drastic setbacks or severe disappointments can also occur, so be ready for them; and be sure that is also possible that anxiety and agitation exhaust the mind, and the nerves are extremely tense, even to the point of insensitivity and indignation.

This is the time where it is also possible that relationship with your environment is influenced by criticism, opposing views and disagreements. In order to successfully overcome this period, inner relaxation, patience, composure, tolerance and faith are necessary.

At this time, unnecessary actions or hasty moves should be avoided – one should always check the evidence once again before making a point out loud. You should constantly nurture a broad recognition of someone else’s errors because anyone who gladly punishes always comes before a judge once.

Always think again before rejecting something that has come to you, because you have a strong desire to break all conventions.

Keep in mind that the transit square of the Sun and Uranus is the one that develops flexibility, and don’t let the day’s events cause some irritating reactions, such behavior will bring more bad than good.

Have in mind, in the end, that the planet Uranus in astrology is always a planet of freedom and independence, and when it is connected to the Sun in any way, this is even more pronounced.

In Synastry, the aspects between the Sun and Uranus give a loving relationship that will be unstable and short-lived in most cases.