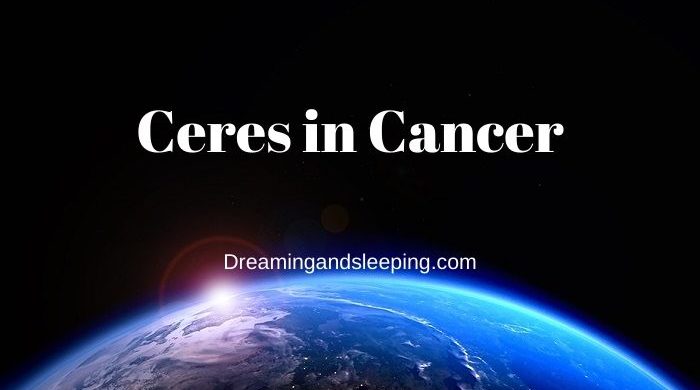 Astrological Ceres plays a big role when it comes to motherhood, since in mythology she distinguished herself as a persistent and sacrificial mother who did not give up the search for her daughter, Persephone, abducted by the god of the underworld Hades.

Ceres binds to cultivation, nature, plants, grain since she was also the goddess of the crop.

In the synastry, it is important to pay attention to Ceres since it is a principle of giving and receiving.

The position of Ceres in Taurus would give the person a realistic style in nurturing others, increasing the desire for them to be possessed.

Interpreting the archaic inner face of this asteroid, we discover the wise goddess of burial, Ceres as an old woman, but also the innocence that was transformed into Hades, Ceres as a girl.

Like the prehistoric old women who held the dying members of their tribe in their arms during the last rites, Ceres inspires us as a compassionate caregiver for terminally ill patients.

The position of situations in which a person might go through hell, as Persephone experienced.

Ceres in aspect with the moon, for example, would make it probable for a person to feel the crisis in their home, not only with family members, but also with roommates or any other person with whom he or she lives.

In this case, even the slightest altercation in the home can make a person feel like a helpless child who has to grow up through catharsis. 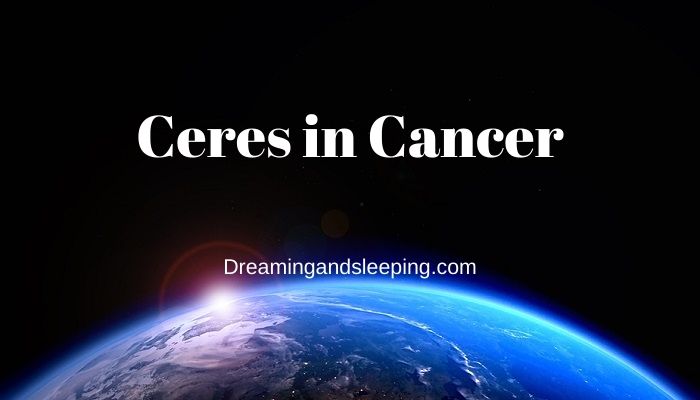 In astrology, the asteroid Ceres acts most strongly in the sign of Virgo, Gemini and Capricorn, while it is weakest in Libra, Sagittarius and Pisces.

When men have this planetary position, they can be very emotional and attentive towards their partners, which is something desirable.

In its exaltation the home environment is surrounded by much protection, the person from childhood can give much value to the family to home to home environment and little value to career and vocational training and life in society.

The only bad thing is that they can fall into the “Cancer Crisis” when they feel the need to cuddle and say, “Nobody loves me, nobody cares about me, I’ll grow old and die alone in a nursing home” syndrome.

Women who are born under this planetary position can be very sensitive and not a lot of partners can handle their ever changing moods. They can become mad over the things that are insignificants, which can cause tensions and difficulties in the relationship.

No matter how strong they fall in love, they can just as easy fall out of it if they sense that you are not giving them back what they are offering to you.

They are very devoted mothers and can be very sensitive and affectionate, and their kids always have everything they need in life because of their desire to offer them the lives that they desire. The love they give to others can really be felt.

Nutrition comes from contact with family and home life. These are people who like affection. Serving the family and home makes them feel comforted. They are good mothers and good children.

They can blackmail to get attention and affection.

They are good mothers and good children.

Ceres in Cancer is in its exaltation the domestic environment is surrounded by much protection, the person from childhood can give much value to the family to the home environment and little value to career and vocational training and life in society.

The desire to take care, protect and help, are things that manifest themselves powerfully and help you to realize real changes and cars as to what you have been living for a while here.

It will be a favorable period for you to work certain things related to your work area, public relations and especially in your area of finance, do not forget that a cautious person is worth two.

Serving the family and home makes them feel comforted. They are good children. They can blackmail to get attention and affection.

These people feel nourished around the house. Hugs can definitely work here. Then you can do housework. They want to be maternal and are good at motherhood in turn.

So from an early age, you have always been a very domestic and nourishing person, and caring has become an instinctive part of your personality.

Your children also need independence, and they can’t cling to your apron for a lifetime! Learn how to harness the energy of Mars from the zodiac signs.

A poorly positioned Ceres asteroid in a natal chart can result in family disparity, poor health, lack of effective functioning, lack of education and the will to work, inability to discern, and unbalanced life habits.

In the natal chart, the Ceres asteroid has a unique meaning if its position is in conjunction with other planets, ascending or descending.

The position of the Ceres asteroid in the signs of the zodiac reveals all the qualities and practical action of the individual.

The negative traits can be their too emotional character and their tendency to make drama about the simplest things, which can be too hard on their partners especially.

In the same way as when Ceres is in Taurus, in Cancer he intensely increases the maternal character he has, replacing the risk of bullfighting possessiveness with that of “emotional oppression” or “absorbing motherhood.”

It also involves risks of dependence and emotional influence, through maternal compassion.

But, in general, it is the most maternal “maternal” position and also facilitates the qualities related to domestic affairs, food-nutrition (insistence on this point can become obsessive in maternal action) and land and real estate issues.

The person with Ceres in Cancer tends towards conservatism, traditionalism, nationalism and attraction, taste and respect for the past.

Regarding this last point, I found a very curious example in a version of Hitler’s birth chart.

There are several versions of the birth chart of the German dictator, in this and in other things the astrologers often do not agree.

Basically, apart from the objective letter that can be obtained from your actual birth time – which cannot always be found – perhaps other letters also reflect the type of person that people have captured or that has gone down in history.

Whenever it is an important character, as is the case.

It has Ceres in Cancer, Dominant near Midheaven and above in conjunction with Misfortune.

It is clear that there can be interpreted an ominous nationalism, conservatism and traditionalism, which would influence the life of this person and his destiny and, unfortunately, that of others. This provides truth to this letter.

People with Ceres in Cancer may be prone to much more drama than Ceres in Lion when it comes to emotions and family.

They are hugged and kissed like drugs and constantly feel the need to hug, pamper and look after them.

If you have a child with Ceres in Cancer, make sure you give him enough love to avoid falling into some kind of depression.

A child with Ceres in Cancer prefers to play at home and invite friends to his home.

The best way to connect with Ceres in Cancer is the holidays when you allow your child to decorate a Christmas tree, put decorations around the house, or help you make cakes.