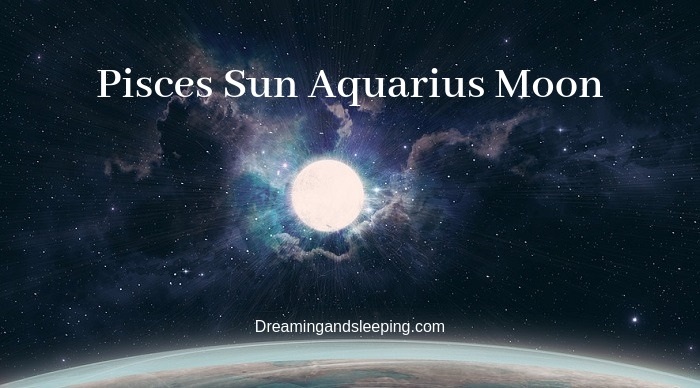 We could say that learning about Astrology is very similar to the process of learning a new language – there are symbols (Zodiac signs) and aspects, and by combining them, you can learn a lot about the whole picture (your natal chart, or if you like to speak about language, you can learn to communicate on that language).

So to have a piece of specific knowledge about this topic, you need to learn the basics, and the next step is to learn to put all “aspects” together so that they make sense and send a powerful message.

One of those aspects that we can see as the letter or words if we want to compare it to Astrology is the aspect of the Sun and Moon in a natal chart.

Today we are learning about the people who have luminaries located in Pisces and Aquarius sign. Right away we will say that this luminary combination makes a person very unique and even tricky, primarily in interpersonal relations.

Here we encounter a person who can live in a certain environment and never be under its influence (regardless of closeness that he has with them, like family), he can show a great interest in a collective, in the people who are close to him.

This is the person who is related to spiritual aspirations and the one that is blessed with the great imagination, along with the great sensitivity that he shows on every step of his journey.

We must say that sensitivity and spirituality are the greatest ideals of life in which others occupy a very important place. This person suffers when he is alone, and then he starts to limit himself and pull into the place where is silence and where he is left alone. He must be in some way around the people, not to close, but close enough so that he could learn from them, primarily about himself.

He expresses particular ability to generalise, to gather different products of his observation into a common image, but above all other things in his life, and we can see a clear desire for merging and reconciliation, instead of subduing contradictions, sometimes can cause conflicts.

Fortunately, this is the person who has incredible imaginative intuition that helps him to see the problems and find a solution before problems arise.

This human being is also blessed with the generosity that above all other things help him understand others, even though in his life things are not going always smooth.

And if, on the one hand, in the life of the person who has Sun and Moon located in Pisces and Aquarius there is a considerably developed need for affirmation in life, on the other hand, this human does not always have the support of proportionate will power to make the best out of his life.

The problem is that this human often (maybe too often) falls under the influence of sensations and impressions that are not always real. He does not fall under the impact of the people who are close to him, but he inevitably falls under his own influence (that comes from his mind).

At times, this human being is very prone to changes, but it is also hard for him to get settled in one place and finish what he has started – this is particularly true in his work.

There is no doubt that this human being has creativity, but creativity without strength and persistence is not worthy, and cannot be materialised in any way. In the end, this person can become a little too much depressed, so the expected results may miss out.

He has an interesting character, but he is very often insecure because he is aware that his resources are not always in line with the high goals he aims at. Consequently, egocentric nature occurs and it can be seen in the situation where he puts himself in the position that does not belong to him – this person should work hard, not imagine himself in the places that do not belong to him.

Here we encounter one very interesting person who has luminaries positioned in Pisces and Aquarius signs, he is very sensitive as we have said, but at the same time, he is very scared of age and loneliness.

This, in the emotional sense often leads to unforeseen situations, except if he finds the lover in someone who is a smart, resourceful person who wants a clear relationship from the very beginning.

So, he needs some shape of stability in his life, despite his love of changes and chaos in some way.

There is one very interesting aspect when it comes to love and this person – he needs to have some kind of mystery and uncertainty because he needs a consistent personal impulse, and internal persistence to achieve something great in love.

He attracts lovers in a way that he is presenting himself in the way that others see him as very original and unreachable at the same time.

Still, emotionally this individual must use charm, unconventionality and wit that easily helps in some more critical situations in his life, and he does it successfully.

When he is consumed in love, he can be very spontaneous, but direct in demanding things that he believes belong to him. One of those things is a place in love where he is the dominant factor which pulls all strings.

This person needs a lover who will understand his originality, his directness and the fact that he does not justify anything that is not in his system of values.

Also, his potential lovers must be aware of the fact, that, at least at the beginning this human being shows a strong defensive attitude when his love interests are in question.

But this also means that he will defend his love, and his partner in all life’s situations that may come along their way.

The fact is, that if he wants to, he has a  great need for orientation and the environment in which you will express yourself, for the people he is identifying to strengthen personality.

He is the one lover that tries to meet himself through others – he is watching, concluding and at times he receives some “habits” that his lover has, but will never allow anyone to rule him or his life. He is engrossed in freedom and independence, but his lover is the one that he connected his destiny.

The main thing is that the person who has Sun and Moon located in Pisces and Aquarius is fighting against the average, fatalism, and monotony, and he will never be happy in such a relationship.

He likes unusual and distant forms, unusual people; and in emotional relationships, he is always looking for ideal solutions and ideal situations that can lead to strange and unusual solutions.

He is often a part of some strange relationships, but no one can judge him, he does things with his heart, he is not calculated in this sense.

This person with such luminary positon often finds happiness in love through strong, more attractive partners (more attractive than him) who have a strong ego and great self-esteem. Being connected with the person who has these qualities means that he will find some security and stability in his life.

The perfect person for this task is the one that belongs to the Zodiac sign Capricorn, and you should not be surprised, just keep reading.

Such a combination partner in love gives a relatively successful love relationship, due to the fact that our candidate can sometimes be more turned to the new and changes, and the Capricorn lover is directed to the traditional spirit and some stable values.

But these two can affect each other in a great way, one can make a Capricorn lover be more open and relaxed, and he will give to our candidate some stability.

These two can have their fair of problems, but they will just make them stronger and more in love if they just learn to communicate and let their inner feeling rule.

It seems that this human being loves to be close to be people, but not too close, just enough to keep the situation under his control, no matter what he really feels. He is very protective to his friends, and they can count on him in every situation.

They just should not be surprised when he decides to spend some time on his own, and he just does not love to share his intimacy with others.

The Moon located in Aquarius sometimes creates a tense relationship with one’s own personality, and the Pisces (the Sun’s location) makes things even more difficult.

So, here we meet one person who has an interesting nature of two different sides that may complement each other but can also oppose one another. One brings the tendency toward overcoming opportunities and events faces a feeling of lesser value that could be justified given the possibility of a positive integration of this person into life.

Another brings narcissism and self-esteem that is not realistic.

So, all in all, this human being has so many qualities, but the fact is that he needs to work a lot on himself, greater calmness, greater confidence, and all things will come in time.

This is the person will pass through many stages in his life, from pain and introspection to the feeling of great peace and success.