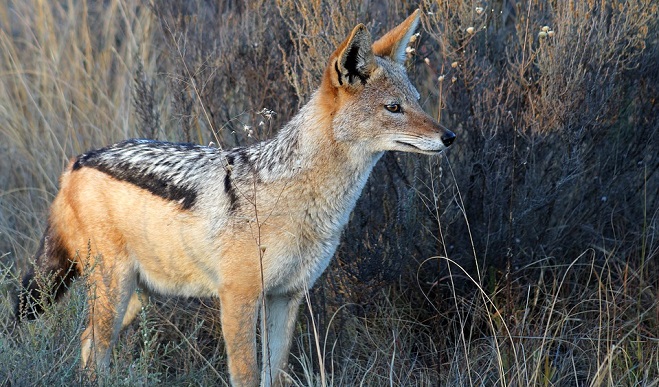 Jackals are mammals that inhabit Euroasian, South American and sub-Saharan parts of the world.

These dog-like creatures are from the same family as dogs and wolves.

They represent some sort of a mixture between dogs and wolves and there are three main jackal sorts: the golden jackal, side-striped jackal and the black-backed jackal.

Jackal symbolism and mythology is deeply grounded in many cultures around the globe, and it is usually based on same prepositions.

Intelligent – Jackals learn from a very young age to rely on themselves and survive in the wilderness. To survive these, often times, tough living conditions they need to have a clever approach to hunting and protecting themselves from larger animals.

Scavengers – Jackals usually feed off rotten corpses that have been left over by other predators.

Jackal as a totem

Everyone born under this totem or protected by it has an extremely good chance of succeeding in life.

These people know how to use their skills and make the best out of life. They are highly intelligent people who can get into almost every career without a lot of trouble.

However, careers that suit them best are the ones that offer them a lot of space to create and innovate.

This is where they feel like at home, and this is what excites them in life.

People born under this totem are also very tactical in life. They rarely give in to emotions since they are not that important for them.

They are guided by their brains and not their hearts. Everything they do is very calculated and well thought about.

This kind of life would be exhausting for someone but they enjoy using their brains and thinking two steps ahead in every situation.

They are very complicated when choosing a partner for themselves since nobody is suitable for them.

They need people in their life who enjoy talking about the same things they like and also people who challenge their thoughts.

To the most people, they can seem like cold and calculated people who are hard to get to know.

This is simply the way they are and that is what makes them so unique and valuable for our society.

They are very concentrated on their work and many of these people develop valuable ideas that serve the entire humanity.

Jackal as a symbol in a dream

Jackal in a dream can be interpreted as a positive but also as a negative sign.

If you saw a jackal in your dream, then this dream could represent your overprotecting nature when it comes to family.

If coyote in your dream attacked you, then you might have an enemy in real life that is out to get you.

If coyote in your dream was dead, then you are going to prosper from a project you have been working on in the previous period.

Jackal as a symbol in different cultures

As a symbol in different cultures, jackal has a very important meaning. In ancient Greece, Anubis was the Greek name for the Egyptian God that had a jackal-shaped head.

Jackal is also mentioned more than 14 times in the Bible, as a symbol of loneliness, abandonment and desolation.

In Pablo Neruda’s poem “I Explain few things” he tells a story about Francisco Franco and his jackal allies.

In Indian and Pakistan cultures, jackals are represented as brave lone animals, who’s courage is comparable to lion’s.

In Native American legends, jackal or coyote (as it is called on the American continent) is seen as a trickster and a transformer.

They believed gods often transformed into jackals and walked around forests and mountains.

Jackals certainly awake our imaginations with their behavior and unique way of life. These lone rangers fight to survive and everything they do is only for themselves.

This kind of lonesome life makes us appreciate jackals more and admire their courage to stand up to the nature by only relying on themselves.