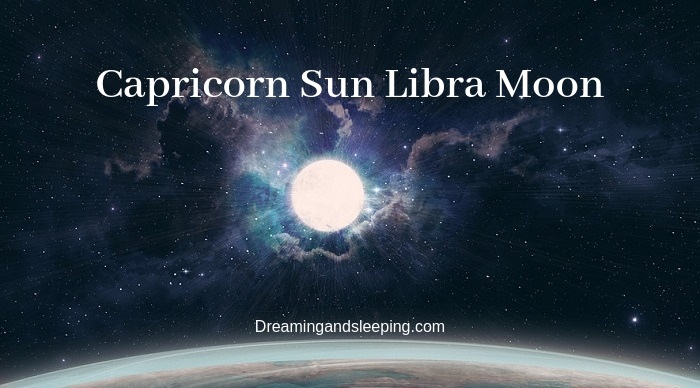 The impact of the Moon that appears in the personal horoscope shows the strong influence and an internal, introspective dimension to everything, along with the ways of satisfying needs and deep desires.

The embracing nature of the Moon leads the mind to sensation and healing, and to endless fields of depth and mystery.

Imagination, inspiration and intuitive sensing are all connected to the realm and rule of the Moon, so it directs on completely different energy than the Suns that is connected to some other activities.

Today we are looking into life and love of the person who has Sun and Moon located in signs Capricorn and Libra. Is this combination good or is there room for introspection and growth? We believe that things are not so perfect, but they could be better, for sure.

This is the person who can be tormented by many dilemmas in his life, all thanks to the Moons location in Libra (the Zodiac signs notorious for his indecisiveness and the ability to change, for good and bad).

But there is one good thing here -he can win this psychological and intellectual dilemma by suppressing his sensibility in favor of clearness that will last at times, or it can be lost in other time.

He is, in principle, honest and objective person who uses all the power of consciousness and the depth of the Sun in Capricorn – the sign known for his sobriety and rational attitude in life.

In his life, there is a possibility that all of these influences are used for the development in many directions, and this person becomes capable of using his forces wisely and productively, excluding the conflicts that create an excessively logical character, or uncontrolled feelings.

Nevertheless, this is a being who cannot constantly condemn himself on being sober all the time and having total control (it is not possible, and it will drive him crazy) even if he wants to do it, and he often does, which leads him to loneliness.

That is why the person who has Sun and Moon located in Capricorn and Libra sometimes does not know where it is anymore and is not sure of its deep-seated tendencies, but still adheres to some of its beliefs and principles.

Since he can be seen as a prisoner of strict principles acquired during his upbringing (or genetics who knows, but many astrologers will argue that all Capricorns are like this), he can hardly reach a flexible nature that he feels feasible and whose fondness he needs to pursue.

In fact, in this human being, there are conflicts – his sense of beauty and sensitivity create a constant conflict with his clear and concrete spirit that wants to live in safety and security.

Having said all of this you could imagine this human as the one that passes so many interesting situations that are there to enrich him but will never get there because of these conflicts.

Like in life, and also in love, this is the person who does not like quarrels, or any type of over the top drama, and he constantly strives for personal satisfaction in any way possible. Of course, here is the conflict -he will say yes to all satisfaction that is not in opposition to his principles.

Love, if you ask a person who has Sun and Moon located in Capricorn and Libra signs, is something that should bring a feeling of peace and stability, and above all enjoyment. It should not bring conflicts of any kind.

It is very important for this human being to have partnerships, emotions, and family is in that sense the primary goal, as the foundation of everything else.

Unlike some other Capricorn people, this is the person who wants to have arranged his private life, and then he can move on to other goals.

Although he can wander for a long time in search of an ideal half a perfect lover, suddenly and unexpectedly there are complimentary emotional opportunities. He often does not notice those who like him, because he knows that he is sometimes in his own world, but he does attract people there is no doubt about it.

When in a relationship, this is the person who is usually tactful and peaceful, who has a peace of mind (he will never shy away from saying what is on his mind).

He has a sense of justice in interpersonal relations in general, and he believes that love affair cannot be a one-way street. In this sense, he develops loving relationships with other people (for example he is the one that gets close to parents of his lover, or his friends, etc.) He never opposes of being loved as much as he can be loved, and will accept love from which source it comes to him.

To really get something done in life, as we have said the person who has Sun and Moon located in Capricorn and Libra sign definitely needs a partnership; not in the sense that he could not do in some other way, but if he is not happy in this field, he would be much more insecure.

Of course, since the Moon in the Libra sign is very pronounced, he always tries to balance things mentally and emotionally. However, when he really wants something (a lover), he is determined, and he is driving the thing to the end.

When in love this is the person who can conquer, shows the skill, and makes some concessions to make it easier to impose his deep wishes.

The good thing is that this person knows how to present himself in the best light instinctively and, many of his lovers adore this.

The thing that he needs to avoid in his life is any hastiness and occasional impulse actions, which often makes his emotional chaos to which he is not prepared.

However, in an emotional sense, this human being does not have any prejudice, but it strives for pure, long-lasting love, but more dynamic and more intimate partner relationships, in particular with those who are focused on security and who can offer it to him.

His essence in love may be somewhat cold, but in essence, this person is very warm, and he deeply craves to show his feelings, but even then he is remaining more or less traditional style and conservative values in a relationship.

Because of this, others might think that he is a difficult and awkward person, the less often he often makes himself unhappy. But there are no grains of truth in it. He is essentially very sentimental and pressured by a strong sense of duty when he finds a lover that he cares for, which sometimes goes to sacrifice.

The only lover that can appreciate these traits in love is the representative of the Aries sign – strong, opinionated, and passionate.

These two people, as a love couple, are very well complemented in love communication and we could also say that they are attracted in an unusual way – when we say “unusual” we mean that both lovers are strong and stubborn, but are in some other way different. And we are deliberately using the word different, not complete opposites. This is relevant to remember here, because difference for life in two can be good, like in this case.

Such a connection is a true indicator of the strong attraction and harmony in the love of opposites.

From this connection of the astrological aspect, the luminaries located in Capricorn and Libra, we could say one master of his own mental state is born. He rules any social situations that he finds himself in, and his friends often use this trait.

He is the one that knows how to help people in some huge practical sense, and the amazing thing is that this person, as a friend is not satisfied only by achieving solely individual desires, but also feels that he must help others.

Still, he has the Sun located in Capricorn, and this means that he is seeking a lot from others and by himself; this person tries to impose virtuosity around him and wants to think and act in a golden environment, with the measure that draws his strength from natural authority.

He expects that his friends accept his role and to have the best out of him.

There are inner moods that are not easy to survive in the life of the person who has Sun and Moon located in Capricorn and Libra.

He is the person who is trying to satisfy his personal ambitions, who is even ready to focus on one goal only to be more certain that he will achieve it, and who little by little reveals that he is losing strength.

When things are bad, he must continue his efforts as an automaton, with almost mechanical determination, and then he develops. He is able to attract other things, to have some other interests.

Although this combination carries a small conflict between a responsible and a little cold-blooded the Sun in Capricorn that is burdened with duties in relation to the gentle and insecure Libra (the Moons position), it still creates harmony and beauty of the spirit.

A combination of the sensuality of principality, beautiful manners, only external leisure, because this person is very much possessed by inner perfectionism, sometimes overload with details and a strong need to satisfy his conscience is well hidden behind a charismatic personal act.