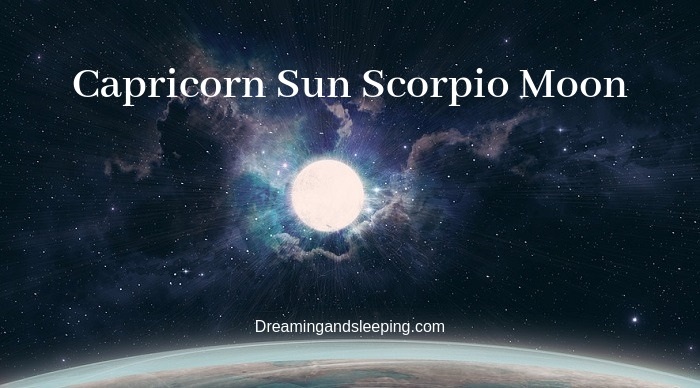 Some explanations of the Zodiac signs show rather than their temperament (that could be something that is very common and applicable for the majority of people), but the definition stances towards the world and very general states of activity.

But there is an entirely different picture in the situation where we look at some other aspects, for example, the luminary aspect that implies Sun and Moon, or their locations in the natal charts of a person.

The position of the Sun reveals who is the initiator and executive in the natal chart, and who is directing energy towards clear objectives according to their individual nature and temperament. So, one person can be built his life directly and vigorously, and others can be slow and passive; depending on their location (the Sun and Moon).

What kind of temperament does the person who has Sun and Moon located in Capricorn and Scorpio sign? Do these two positions give one stable and constructive personality?

We believe they do give, and much more; as you will be able to see in the text below he is one well-rounded person with many strengths that he directs in the best possible direction.

Even if this combination as some astrologers like to point out reveals the unrest of the soul, this human being exhibits enormous will and perseverance -with him there is no joke, he will reach to the picks that he set for himself, and will do it with such passion that others may just fear him.

These traits are seen in the majority of his actions, and this is something that is his leading force in life, of course, it also brings some unwanted things in his life, but we will talk more about this issue later in the article.

On top of all those strengths he has the unshakeable security, but in reality, every his rise is the result of a hard-won maturation and carefully calculates steps that lead him in the direction of the victory.

He often may seem like the quiet and simple person who is even by some standards weak, but his essence shows that he is an extremely complicated human being, far more sensitive than he will ever let anyone see, just because he does not want to reveal his weaknesses.

He tends to introspection, his sharp and patient mind accentuates important things, and this allows him to figure out his inner secrets.

He uses his clarity, distance, logic and perseverance, to reach long-term success – and be sure that he is the one that will show his success to everyone, secretly believing that he will be an inspiration for them.

Because the one that has Sun and Moon in Capricorn and Scorpio signs is very persistent and determined to seek the truth in all things, he can be burnt out because of his activity.

Therefore, the main advice for this human being is to try to strengthen his personality, to build it firmly until he develops a kind of armor, insensitive and indifferent to undesired feelings.

When you meet a person who has luminaries located in Capricorn and Scorpio signs, you will immediately understand that he has something about him. Some say that this is the aura that surrounds him, and he is not like the majority of the people you meet in your life.

The Moon in Scorpio sign makes this person mysterious, a hard-working human that can sometimes be overly involved in his work, forgetting about other things that are also very important for personal growth.

He is, in fact, a human being who does not trust anyone, even to himself; he fears that some of his temptations will come to the surface and that he will lose control. And his main enemy is his fear; when he is in such state, then he does not deal with things in a usual way, but he loses his strength.

He will do anything to prevent this from happening and in this sense, he is able to submit superhuman efforts at work and in other duties, just to prevent his passions and dark desires from coming to the surface.

He has in some way a fascinating, reserved and tense, often sober and worrying personality, obsessed with guilt feelings, which is why he is often suspicious and cautious in his relationship with the environment.

What is also clear here is that he has pronounced defense attitudes.

But for him, there are certain explanations in the internal struggles that are present in him, and he if he realises what they are, he can overcome his flaws.

One interesting thing that is connected to the person who has Sun and Moon located in Capricorn and Scorpio signs often has very unusual love experiences, but he is more sensible than he shows. Maybe this combination of characteristics brings him to one very interesting love life that cannot be compared to anything.

In romantic relations, he often acts distanced, even cold and merciless if things are not going in the right direction for him, or in the situation where he is not interested in love (in a certain time of his life).

And we firmly believe that this trait represents a big flaw in his life, because he does not want to open his hearts to the world; he leaves his privacy is between the walls of his soul. Like everything else in life, the more mystery you project, people want to know more about you, and the same case is with this person; in love even more, since he truly seems like one very enigmatic and sensual human being.

Having said all this, we must also say that emotions are a field that is more fragile for him (or to say a soft spot) and when things go in the right direction in this area, somehow the other fields are not a problem for him.

A person who has Sun and Moon located in Capricorn and Scorpio signs has a considerable attitude toward social success and spiritual upbringing.

He likes to be connected to all human things, everything that is sexual and sensual, but at times this is done from the meaningful distance.  Otherwise, he can live and love in the power of your weaknesses, and this person can sink much deeper under all of these values that he cherishes.

Others could see this human being as an egoist, conformist, stiff lover who is convinced of the correctness of his many suppressed desires; and the one that just wants to please himself, and we are not saying that he is not like this, but he is just a lot more.

But his lovers also must be aware of the fact that this person is inclined to sink into the intellectual and sentimental loneliness unless that lover proves to be the right one.

Besides the possible appearance of this person who has Sun and Moon in Capricorn and Scorpio signs that may seem cold and unreachable, he is the one that has a sensual appearance on others.

A person who is born in the Zodiac sign Pisces is the one that is one lover that may prove to be the right one for our candidate. A warm, interesting lover who can understand mysteries and even enjoys them very much.

In this love affair, both lovers are very romantic, sensual and enjoy the emotion, tenderness, so in this case, the combination of personas; the emotional match is almost perfect. What one lover lacks the other one will give, and vice versa, they just feel each other, understand and support.

They need to try to become more open and to speak about things that are on their minds, including fears and suppressed desires – suppressing them for a longer period of time will just bring discomfort that will grow into something that cannot be removed from their lives easily.

His friends must be open and honest to him because he is a great detective who mostly psychologically observes others – nothing can escape him, and no one should try to fool him in any way.

Looking things from the others side, he is the one that hides things from others, and he does it very successfully; but we must add that he knows everything about his friends, but he never judges them.

Though by nature this person is not really talkative, others want to be in his company, and depending on his current state of mind, he may have a lot of friends.

The great power of will often leads him sometimes to the exaggeration – and as in all things in life, he wants all or nothing – the same case is in his friendships, he wants to be one and only friend to his loved ones.

It’s not easy to know this human being, because much lies hidden under the surface, as in the life of all Scorpio people, and even in this case, the Moon in this sign gives so many of these characteristics.

This combination of luminaries is a union between passion and reason, with the ever-present feeling of belonging to one magnified one.

He has some fabrications in his mind, but they are not sad in some way, which is a good thing.

A cold indifference that is present in his character, but all things in his life are actively fighting the thrilling passion that enables the organisational ambition to come to terms.

All in all, we have here one very interesting combination of the luminaries that give birth to one passionate person who fights his other traits.