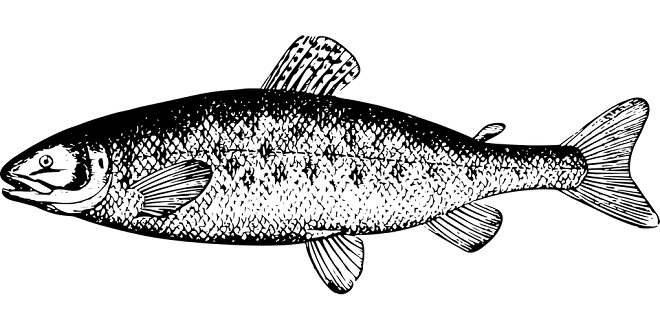 Salmon is a common name for several fish families of the ray-finned fish. Salmon’s habitat is the North Atlantic and the Pacific Ocean.

Since their habitat is restricted, the symbolism linked to this fish has also been built by people living around these areas.

Fertility – Fish is well known for its ability to reproduce and create many offspring. Salmon is no different than that. Millions of baby fish get born each year but due to many natural predators many of them don’t survive.

Adaptation, Change – Salmon travels each year from the ocean to the fresh water to reproduce. One characteristic that is especially linked to salmon is constant moving and change, so people often took this characteristic and applied it in salmon symbolism.

Salmon as a totem

As a totem, salmon is a symbol of rebirth, moving, happiness, eternal life and femininity. People born under this totem love life and enjoy every second of it. They know how to live their life to the fullest and fill it with people and things they love.

People born under this totem are happy people. They love smiling and sharing jokes with others. You will rarely see them angry or upset over something, because it is simply the way they are.

Salmon is also a symbol of femininity and reproduction. People born or protected by this totem enjoy having large families and being surrounded by family members.

This fills their heart and makes them feel grateful in life. If they didn’t have family in their life, they wouldn’t be able to survive tough moments, since they always ask for support from the people that are close to them.

Constant changes are another thing characteristic for this totem. You are a person who like moving and seeing things progress in a positive way.

Everything that is stale and monotone is not interesting for you. Travelling and exploring new places is in your blood. They fill you with energy and will to succeed in almost any goal you set for yourself and nothing can replace that feeling.

They enjoy seeing things in their life changing. If something has been on the same path for too long, then you are probably already bored and you want to see things progressing.

Sometimes this characteristic can be negative, especially if you can’t keep yourself at one place and finish one project at a time.

This means you will often leave projects behind and move on to something new, just because your desire for change has taken you to a completely new idea.

Fish usually symbolizes femininity. Simply because fish represents fertility and it is deemed to procreate and fill the water with its offspring.

Salmon represents infinite wisdom and prophecy so if you are protected by this totem you will be guided by your own intellect and knowledge through life.

Salmon as a symbol in a dream

As a symbol in a dream, fish in general symbolizes emotions and struggles. But, there are more to this interpretation if you carefully study the symbol you had a dream about. If salmon in your dream was in the water, this dream represents feeling of loneliness. You feel like you have been abandoned by everyone and you don’t have anyone to turn to.

If salmon in your dream was swimming in a group, then this dream represents you have a lot of people around you. Some of them wish you good and some are just there to sabotage your goals.

If salmon was swimming through clear water, then this means you accept loneliness easily and that is the way of life that makes you the most happy.

If salmon is swimming through dirty water, then you feel a lot of burden in life. You have a hard time making your plans into reality and something is always on your way to success.

If salmon in your dream was bigger than usual, then you probably have some tough decisions in life to make. Small salmon, on the other hand, is a representation of your desire to say something but keep getting interrupted and prevented from doing it.

Dead salmon in a dream is a symbol of material loss or defeat in a certain filed of your life. Things won’t be going your way and troubles are going to come out of nowhere.

Salmon as a symbol in different cultures

Salmon plays an important role in Celtic culture. In Celtic mythology and poetry, salmon is considered to be the creature of wisdom and venerability. In Ireland, there is a creature in Irish mythology that is called Salmon of Knowledge. This creature grants powers of knowledge to whoever eats it.

In Welsh mythology, salmon is considered to be the oldest animal in Britain. In this exact tale, the oldest animal (salmon) is called Llyn Llyw and only this creature knows the location of the Mabon ap Modron.

Salmon mythology is present in the Northern countries, and in Norse mythology, Nose God Loki jumped into the river and transformed himself into a salmon to escape the punishment of other gods. The story tells that the gods trapped Loki with a net and Thor caught Loki by the tail and that is why the salmon tale is tapered.

This doesn’t necessarily mean reproduction in form of children. It also represents reproduction of any kind. People born under this sign have a great desire to paint, write or even build to express their talents.

Salmon for the Native Americans symbolizes wealth and prosperity as well as enjoying the good life. People protected by this sign love spending time around people who love them and sharing thoughts with those who don’t see the world as an ordinary place.

Salmon tattoos are popular in modern times and people try to express some of the symbolism of this animal through art.

They find salmon to be a representation of independence and family, and we can see often see people’s bodies decorated by this extraordinary symbol.

Salmon symbolism is highly influenced by the way salmon spends his lifetime. Even in modern culture, people often relate salmon to personalities who are reproductive and ever-changing. Salmon is a symbol of freedom and independence but also family and caring.

Salmon symbolism has a strong ground in many cultures and mythologies around the world and that is what makes it unique, eternal symbol we often refer to.