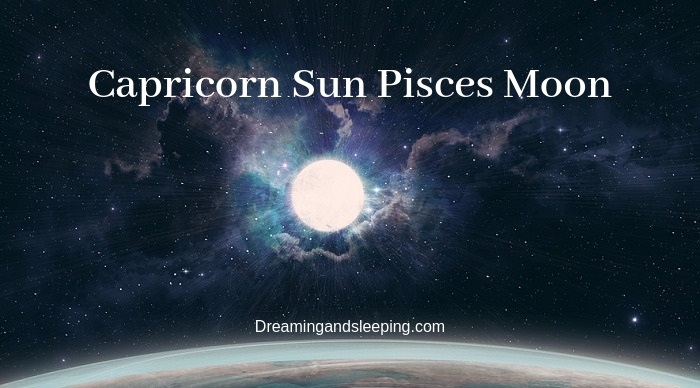 The influence of the planets in the natal chart can be seen in many ways, for example, it could be seen (or measured) their distances, or angles – they speak about the expression in a certain sign, and this is something that people gives that specific personality or behavior.

And we must say that without these aspects and many other references that we find in the personal horoscope, the luminaries would not have any astrological significance for the person.

Today our focus is just on the luminaries, and we are talking about the person who has Sun located in the Capricorn sign and the Moon positioned in the Pisces sign.

We think that this is a good combination and that this human has a well-rounded character. You make your own conclusion.

This human being is a great opportunist and mind, and he succeeds in life without being noticed, he takes his advantage out of the game and defends his interests whenever he can do.

Although not very ambitious, the one that has Sun and Moon in Capricorn and Pisces signs has the ability to reach a high intellectual level, which is further reflected in a much more elastic and more positive attitude to life barriers – this is a clear example of well-rounded character where two opposites are combined.

He is the person who the purity of the feeling, and the sensual life of the Moon Pisces is partly regulated by the clear and cold mentality of the Sun in the Capricorn.

Sometimes this combination gives birth to a person who is able to combine his feelings and rationality from which he benefits from his intuition – what a perfect combination, what a strength and tenderness at the same time.

This is the person who acquires intuitive knowledge and uses its abstraction and logical reasoning abilities to express and better understand what it has found.

In this exceptional cases, in a people who belong to this luminary connection are so strong mentally that their life becomes, in a certain way, a reflection of the real world, and he is able to see his life, and the life in general in the way that not many people could see.

In this sense, he is able to change that world, and to make it better. He focuses on details and is persistent until he reaches what he has intended.

Sometimes people who get to know a person who has such luminary position feel that they are dealing with the person who is untouchable in some ways, despite his imaginative nature that not many people could understand.

He has a very unusual nature, aesthetics, but is not a person, who is so optimistic, and he does not believe that he deserves many good things; he could also be very depressive and even very dark human being.

He has his own world where he enjoys, and it is ok, but in some ways, he does not welcome others in his world so that he can be very lonely.

Due to the Moons location in the Pisces, this is certainly a very sentimental nature that is n conflict with the real and hard Sun that is located in the Capricorn. This causes constant oscillations, as if there is no middle term, this person, or has a strong ecstasy and happiness where it moves the whole cosmos, or withdraws and does not want to participate in the current events of others.

We have already said that this person is divided between tenderness and coldness, but we have to say that he has a calm nature and no aggressive nature, despite everything else.

It must also be said that this human being is much more sensitive than others, and he truly needs in love someone who will understand his ideas in love.

The one that has Sun and Moon located in Capricorn and Pisces sign is an idealist who is ready to handle love with the greatest efforts, without delay, which sometimes goes to sacrifice -yes he is more than willing to give all of he has just to make his lover very happy. This kind of behavior goes to the extremes, and he can be the one that sacrifices himself for the love of his lover.

Sometimes his loves stories start out of compassion, and then he decides to become long term friend, and when he least expects, his story becomes a love story, and love knocks on the door.

When it comes to his behavior in relationships, we must say that the person who has these luminary positions reacts very emotionally to life and is more sympathetic than a typical representative of Capricorn sign, and all thanks to the Moons location in Pisces sign.

This aspect brings care and tenderness and everything else that is connected with emotions, these are all traits that describe Pisces sign, but this also means that this human being is quite passive and often live in opposition to his emotional wishes: he is very much attracted to the things (lovers) that he cannot have.

One more thing is important here, this is the person who needs to have major security in love, and so he may often be able to hesitate and wonder when it comes to relations with other people. Sometimes, for this reason, he is able to throw yourself into some unknown experiences, just to make things moving in love.

He does this in a mysterious way, all of his lovers must be aware of the fact that he is often fleeing from reality, so he can often be unrealistic and unaware of things that are going on constantly in his life.

In the end, this is the person who, during life, has so many unclear and chaotic relationships than anyone else -he wants to be in a real relationship, while in some other ways he wants to explore, etc. This can be very confusing because there is a constant struggle between intelligent beings and the beings that are imaginative and irrational.

When we are talking about perfect lovers we say that this place belongs to the person who is born in the Cancer signs – these two will feel good one with another, there is compassion and nobility.

When they are together, everything makes sense; they find it to make reasonable decisions always, so it always goes with the heart, something “where the heart leads me” principle.

Both lovers in this relationship show loyalty and confidence, although they may find a great crossroad, we feel like these two can make it work, whatever the problem may be.

The person who has Sun and Moon located in Capricorn and Pisces signs choose friends that just feel good, and they rarely have some secret agenda hidden. Maybe only in times when they work on some specific goal, and they want to succeed in something, then they could “use” their friends in some way, but there is no hate in this sense.

He knows what people could be his good friends for life, and who cannot be, in this sense he makes good choices.

He finds love and compassion in them, and regardless of his individuality, this is the person who needs them to feel complete and happy.

The most important thing is that in the friendly relations there must be loyalty and confidence, although he is a great crossroads when his friends are in the midst of life, then he may have new friends away as well.

So, regardless of how these two natures that come from the Sun and Moon connection in the Capricorn and Pisces may seem as contradictory, but that’s only at first glance.

The strong will and coldness that this person sometimes shows is a direct consequence that comes from the Sun that is located in the Capricorn, but this is just a start, this is the person who is marked by the indecision and extreme sensitivity that comes from the Moon in the Pisces. We will say that it seems that these two sides are in some perfect connection.

Depending on the case, this person is either rigid under an elastic look or elastic under a rigid look. It is difficult to deal with the variability of his mental state, he cannot always express what it feels (and he feels a lot of things, all the time), but it has real generosity and a deep need to really be useful.