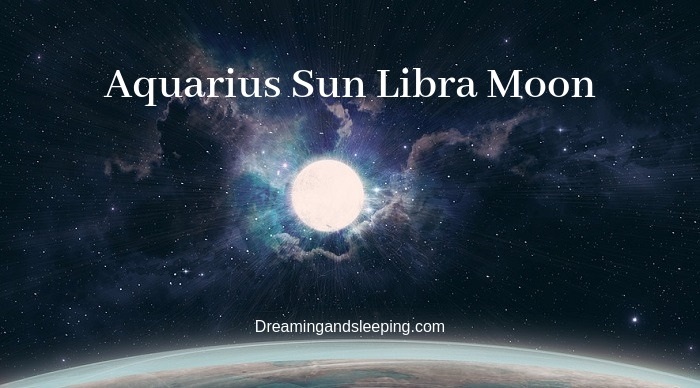 Many time now we spoke about the favorable and unfavorable aspects in a person’s natal chart, and their impact on life.

Some Astrologers claim that the unfavorable perspectives emphasise the negative characteristics of the planets that are involved in a certain natal chart; for example, the unfavorable aspect in the planet Pluto brings negativity, moodiness and darkness in a person character.

This is the simplest way that you can learn how this works, and we will also add one more thing- these aspects often drive people to move, as they want to overcome the challenges and difficulties the particular perspective provides.

But before all of this, it is a good idea to speak about the luminary aspects, the Sun and the Moon, in the example of the person who has them in Aquarius and Libra signs.

The person who has such luminary aspects is very tactful and peaceful in his actions and reactions to others; he has the gift to develop relationships with other people that will truly last, and be beneficial for both sides.

He is a very social person who would want to be found everywhere, and he likes to listens and to give advice that is not intrusive, he respects others privacy as much as others respect his own.

He is also the person who runs away from loneliness and develops exclusively within society; he cannot do it alone, regardless of the Aquarius’s tendencies that are pushing him towards loneliness.

He needs to follow his diplomacy and impose his ideas, even when they are most progressive, and his environment is not for them.

In the end, he is endowed with enough charm, sense of humor and visions to deliver the best that he has in every situation.

As a result of everything that we mentioned in the previous section, this is the human being who has the personality that almost always succeeds in winning the desired positions, and who instinctively adapts to his needs and means of reaching them. And this is ok by all means, and just there is a problem, this is not the entire story.

Listen well here –  he can also be quite consistent with several small faults – based on blind optimism – such as carelessness, laziness, nonchalance, even the negligence of the one who naively thinks things will settle on their own.

All of these traits can make much more harm than anything else, cause he can ruing everything that he built until one of these flaws come to the surface and ruins everything.

So, if these two tendencies are not very well balanced, he cannot expect ever to achieve the enrichment of personality.

The good thing in the love life of the person who has Sun and Moon located in Aquarius and Libra sign is very open and honest to his needs and desires, he rarely faces anything in his life, and love never. He despises anything that is fake or done for a certain idea that came from society.

So, he can even find much- needed security through partner relationships, but one should never underestimate this combination because it possesses extraordinary intuition, mental compatibility and resourcefulness.

Anyone who deals with him in any way should never try to hurt him in any way, cause he will see those intentions, and will never forget it.

In the end, when it comes to love and this person, we must say that he shows a tendency to a great enthusiasm that is brought into love relationships, but emotional preferences to relationships are either based on something that lasted for years, or that comes after time spent in long loneliness.

We must say that the person who has such a combination of the luminaries can be predestined for more lasting relationships, and needs a more relaxed partner because she loves her enough to analyse the constant brain.

He is more than capable of setting high goals and being extremely responsible to his partners; and his lovers will enjoy in him as he is an exceptional friend, very gentle and caring (and additionally very careful adventurer).

One thing must be said – his family or lovers are the ones that give him the strength to move forward in life, to succeed and to make his life worth living. Right up until that point he is rarely aware of this need and often neglects it.

He can be sometimes difficult with his lovers when it comes to accepting different opinions and people, so he always has to pay little attention to relationships, so that they can last.

In the end, it is a good thing to mention that this person, when in a loving connection is very passionate, even though he behaves abstinently and mysteriously at times, thanks to the Sun in the Aquarius sign.

There can also be a strong line of egocentricity that he does not let always to show, but sometimes it does; however, this combination of luminaries offers emotional capability, it is more about the fact will that capacity will be used.

This is the person who is distinguished by the tendency to purify things in his life, in a sense that he is constantly estimating pros and contrast in all life’s situations (the Moon in Libra sign).

He sees life in all of its good and bad, he sees what is positive and what is negative, so it’s hard for him to take the attitude right away. He has the great need for clear orientation and the environment in which he will be expressed.

This is the person who knows that he can meet himself through speaking; communicating with people, so his lovers should be people who have something to show.

The perfect lover for the person who has all of these characteristics as a result of the luminary positions in the Aquarius and Libra signs is born in the Aries Zodiac sign.

These two are positive, and partners who are ready for open communication, and when misunderstandings arise in their agreement, they tend to have a fairly objective approach when looking at things as well as to find out as soon as possible the cause of the problem in their love relationship or marriage, a balance would be restored.

So, every problem that may occur in their love life, you can be sure that they will resolve it and the best part is that they will never lack passion and commitment.

As we have said for this human being, the environment has great influence and he learns about himself by looking at others, so it is very important to have good friends around himself.

In this sense, he is very skilled when he needs to settle something around and be able to adapt to the environment in which he is moving. He seriously needs to question the views he represents, and the fact is that people like him because he is one person who has exciting taste, behavior, and attitude.

If he chooses, and he does, he wants friends who fulfill his standards that are unique, and some would like to say, very high.

He must be very careful never to underestimate the problems that he encounters, and conflicts with his friends are among them.

This is the person who strives to evaluate the outside world, sometimes tilting to a superficial and unstable attitude in relation to life, and this is the moment when his friends turn back on him. They feel like they cannot follow him in any aspect, and this is the time when their part.

His main disadvantage may be the tendency of misleading people (the worst case scenario, his longtime friends) at times, as a consequence of the inability to make a clear decision, deceiving himself and loved ones – he must keep an eye on the windy impression he leaves.

In this combination, the Sun in the Aquarius and the Moon in the Libra sign are joined together – indicating the drift of the beings towards a universal harmony, sociability, openness – all traits and virtues that he has in life, or at least that he strives for in life.

His inner world is a place where intuition, optimism, mobility, inventiveness, lightness and elasticity are accompanied with the strength. This refined personality, scalable to the smallest detail, hides within itself the perfect engine.

The Sun in the Aquarius is often associated with people who are extremely smart and inventive, and when this ability is connected to the Libras values, you can imagine what is like this personality.

To sum up, this is the person who has a harmonious nature, symphonic in every expression, because it contains the endowment and the highest virtues of signs, reinforcing them and excluding the possibility of conflict.

In some sense, the person who has Sun and Moon in Aquarius and Libra is engrossed in freedom and independence, and no less engaged in the group for which he associates his destiny, fighting simultaneously against the average, and any kind of monotony.

He is the one that freely launches a social ideal that guides him to the better understand others, and even to try to alleviate conflicts of thoughts.

He would like to live in a world that is in many ways perfect, and this desire may seem for many unrealistic but does not easily turn away from his own ideas, so he can suffer if reality is different. And often times it is.