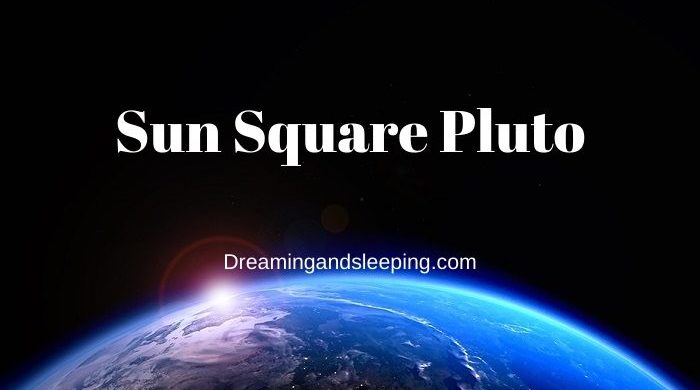 Let us define what does the square position means for the people who have it in their natal charts, and in a general way, in astrology – this is the position that is defined with physical activities, strength and power, authority and control that is ultimate; in the sense of a major struggle against personal limitations.

The square position that is formed between two planets speaks of the process of redefining goals, and it is responsible for the efforts that lead to results that are visible.

The same goes for the mental strain and obstacles a person (who have this aspect) faces when they need to solve a particular challenge or task.

So we have energy, we have goal or task, and we have the path that we will take – it can be with the positive or with a negative outcome, there are no certainties when the square position is in question.

But, for sure, this is the aspect that affects human relations, in the sense of taking over dominance and control over the other one, or others.

Here, the two planets that are in this connection are the Sun (as we have said, we are calling the Sun also the planet, just for easer understanding) and the planet Pluto, and we will not waste any time on explaining the importance of the Sun in the natal charts and astrology in general (everything is connected to it, it is the center of our Universe and also our life as people who live on Earth).

What does this mean, since we know that the square position is heavy as it is, but when one of the planetary elements is the planet Pluto that is difficult also? Well, you never know what can be the outcome, and you can hope for the best.

Squares, in general, in the natal chart enhance willpower and motivation that we all have, but at times we do not know how to express, and you should look at the square position in the natal chart as the power that is directing us toward the actions – with it proper usage, we can come a long way and have success in the end.

In this example, the Sun and the planet Pluto form of cleansing link and as such it can affect the maturation of persons provided that they are ready to learn from experiences that are given to them (the lessons that Sun and Pluto give could be very hard) and not repeat the same patterns of behavior if it did not give results. 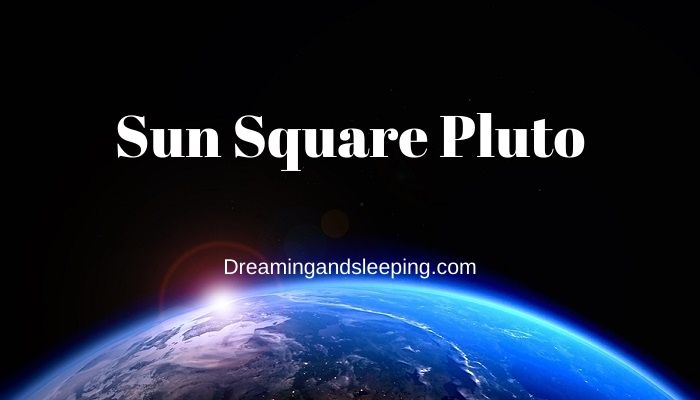 But here, it is possible that a person will grow, and only after the stage of understanding that the square as an aspect receives a creative function, through which a person can achieve his goals.

So, it is possible to grow when you have this planetary aspect, and this can be the growth that is based on extensive experience, on mistakes and problems that tormented that person.

In some way, the best teachers are the ones that speak from their own painful experiences and mistakes.

All this time, you must bear in mind that Pluto symbolizes humans who are inclined to manipulation, control and hidden movements – they love to work in mysterious ways.

Pluto is the planet connected to all secret societies that have some kind of power over the environment.

If we assume that these two planetary objects will take out the best from one another, in that case, we get to see one very harmonious action that is shaped by the strong characters of people who have it and what is even better is that they could always be inspired and ready for bold challenges and changes.

If things go in the direction, they want it, and such changes will alter and enrich both their life experiences and the lives of members of their environment and society in the whole.

They could be seen as courageous visionaries and leaders for the future, and their driving force is their inner need to change, to improve life.

They are never content with their achievements but always strive for the new challenges of pushing the boundaries, regardless of cost and consequences.

Here lies the catch, they can try and fail, but there is nothing that can stop them in their journey.

We could also say that those who have this square position in their natal charts have a very powerful character.

They are very strong and powerful leaders, and when the planet Pluto is dominant and when it receives harmonious aspects (it could get one from the square with the Sun), it indicates the enormous wealth that these individuals acquire.

They could lose it, but this is another story.

Astrologers say that the square position that is created between Sun and Pluto is heavy for those who bear it, and it can be. It can be bad on a regular basis, it can directly on internal or external struggles, making people very slow in their journey toward success, and there is nothing they could do that does not include a fight.

Have in mind; while you read this that the Sun is the representation of the consciousness and the embodied temperament, in the encounter with the Pluto, people who have it could experience difficulty through the relationship with the world that is around them.

Everything could be slow, hard, painful – at the same time, these people are builders and destroyers. They can build everything from scratch, and they could destroy things with the same ease.

We must add that for those who carry this heavy aspect can be easily offended, at times they care too much about the opinions of the environment, as well as established taboos, and in other times they want to see that and are not afraid that they are those who call for revolution and change, all of that including chaos that is also present. They believe that from it, rebirth is possible.

The square position that is seen in this example make people who have them in their natal (especially for those who have other problematic aspects) to live their lives and do not find understanding and approval of the environment, because other people always need time to properly perceive and understand the value of their efforts and accomplishments (for many those efforts are not normal or usual).

We will add just one more thing here – do not be scared if you have this aspect, as with all difficult aspects, so with the positive ones, this personality will “push” at a thousand revolutions because it does not flow at the same speed as it does for other people. And this could be a good thing.

If you have any interest in people who carry this aspect in their natal chart, you must know that the freedom is a term of the highest importance in their world, and not only it is the representation of the fundamental driving force in them, but also the goal of each of their challenges and accomplishments.

And, of course, it must be respected in their love life, they must be free by all means, or they will leave any relationship they find themselves in (long-term, short-term, whatever it may be).

For their sake, and if they want to achieve some solid, and complete connection with another human being, these people must be able to compromise, even if they nurture an uncompromising need and aspiration to be alone rather than to give up.

But, if they somehow manage to focus their attention on loved ones as their vision sets their focus far ahead, and if they manage to give their love and emotional focus for the current moment, for the people they care for them, they will manage to live happily.

But, have one thing in mind; the square Sun and Pluto make one very interesting situation that for these people, affectionate closeness is not an intrinsic inclination, but the love that produces well for all of humanity is something that will incite them to even the bravest and most humane acts.

Form them, and you can expect that they show love for humanity, then for one person individually.

People with this aspect are seen as courageous visionaries, researchers, and revolutionaries will rarely be understood throughout their lives, but their spirit will boldly shift the structures of knowledge and perception of their counterparts, which will only be fully understood in future generations.

Many of them are attracted to art, but some of them love astronomy, philosophy, mathematics and the natural sciences.

As we have said in the previous sections, people with this aspect are at the same time builders and destroys – they could create, and they could ruin; it is all up to them.

The talents they own is undeniable, but the destructive energy that is in their blood makes them hard to focus on the good.

They do things ahead of their time, so it is a much more common situation that they fail in business, and then they succeed, just because they are not understood in their own time.

If there is any satisfaction in the future, as they could be recognized and respected long after they are gone, then their mission is accomplished.

There is no doubt, this square position gives such heavy energy and demonstrating power, and when this aspect arrives in the night sky you must be aware that this is pretty challenging energy, for many it could take to self-esteem, sometimes it’s arrogance, fanaticism for some – it can truly take the worst out of people.

Things could be even more challenging if this is the aspect that exists in your natal chart; then it shows a desire to defeat someone and not just in any way, but in way that you are strongly demonstrating the power This time may bring for many of us a fight for power, along with conflicts with authorities, with “those” in power, with some powerful people, whatever that may mean.

You will truly need a lot of strength to overcome major crises that are possible, and that can lead to destructiveness in reactions and actions among people.

The best advice that we can give you is to be careful, not to be a victim, not to be abused and avoid violence, if possible.

In this aspect, in the conflict, the Sun is our will, identity, ego, our strength and it shows a strong need for individuality and in a square with the planet Pluto we could see a strong need for change, those essential, profound, the need for transformation and regeneration.

Now, that process could be achieved in a destructive or constructive way with the need to demolish obsolete structures.

Do not be surprised if you read in the news that this aspect is active and that revolutions are beginning; since it brings a strong rebellion against the authority. This is the energy of rebellion against power, imposition of power and against manipulation.

On a more personal level, all people could feel the need for liberation, because this square shows the great need for control and domination (Pluto) over someone else’s will (the Sun).

In the end, know that this is one very challenging energy, and besides the fact that this short term aspect does not last very long, it can be really intense, and it is in such an environment (other aspects) that we just have to feel it somehow.