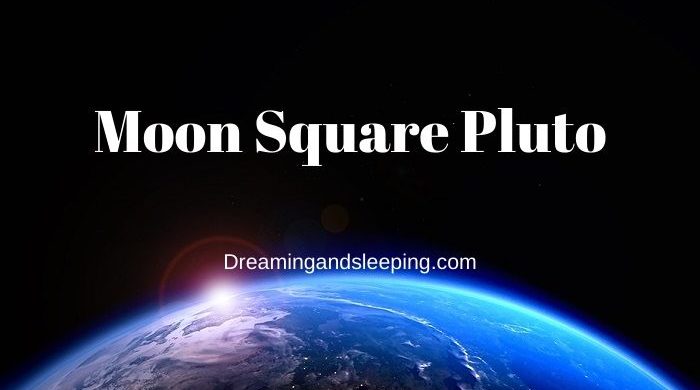 First of all, you need to understand how much importance this aspect carries in the realm of astrology, or natal charts.

The square position is the one that is defined by the tension, primarily internal, it has the nature of forces and the person initiate and resolves the tension- this is the aspect that affects people in such way that they are detecting an inner tension, and they are blessed with the force to resolve it.

It is necessary for a person to give up comfort and come in contact with what is most scary to experience a transformative experience.

Now, the square could be formatted between different planets, and here we are looking for one, in particular, we are looking into the world of a square position that is created between the Moon and the planet Pluto.

Pluto is such an interesting planet that has many good and positive aspects as well as very unfavorable ones.  On the other side, we can see the Moon that is always the representation of emotions, sensitivity, family, inner needs, etc.

As someone who has a dominant and strong Pluto in natal, I will try to portray this mysterious planet in astrology in a deeper and different way.

What kind of connection these two make and how can this square become beneficial for the people who have it in their natal charts.

The square as the planetary aspect does not involve the opposite and does not develop consciousness, it triggers things, and this is its biggest strength that could be used in the right or wrong way.

Some say that the square position in the natal chart is the weak position that is much weaker than, for example, the opposition. This is the force that is created between two planets, and its purpose is to force the individual to take action. 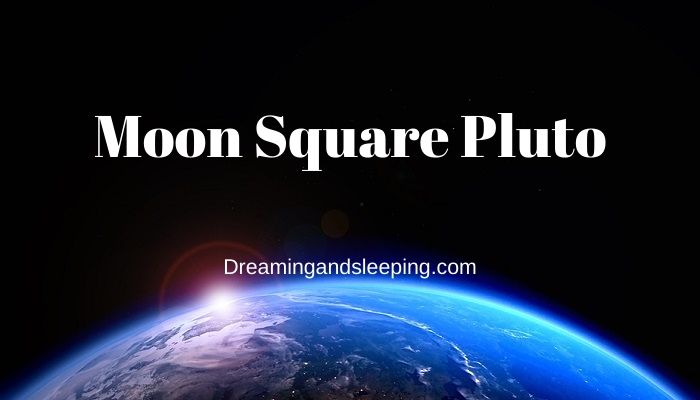 It is truly meaningful for you to understand that the square position is connected to the unconscious, to the hidden parts of our lives, our minds, but if other aspects are not developed in a good way, then it cannot help with the process of developing an awareness of the existence.

Usually when people are young, then the square in their natal charts has a bigger meaning, then in later years of our lives. It is best seen in the way how young people do not know or have a problem in asking the planned action to address the tension.

Take a good look into their personal and professional lives, how they deal with problems and what kind of problems they have – Moon connected to the emotions and Pluto that is connected to the destructive or constructive parts of our lives. Here, these two can be mixed in many different ways.

As astrologers like to point out, the square position is the one place that allows the birthplace of the soul, and it has a chance to be mortally endangered (Pluto). Because the soul “knows” that when the human soul is dead, dead and all humanity is human.

You must know that whatever kind the square you are having in your natal charts, they always or usually rise to a variety of crisis situations, challenges, constraints, resistances and obstacles that, with conscious action, can lead to transformation, maturation, productivity.

So, this is the aspect that brings so much, but right after some things, ideas, goals, thoughts are transformed into something else.

It is all about the changes that must be the positive side of the entire square, just as growth.

Here, where the Moon is connected with the planet Pluto, we can see the symbiosis of the emotions and the power of transformation.

The Moon represents our emotions, how we react to things around us, our mother and relationship with her, our growing up – everything that is connected to the emotional or hidden part of our lives is the Moon in the natal chart.

On the other side of the story, we always meet mysterious and interesting planet Pluto that represents transformations, power, and manipulations.

But, if the person who has this aspect in its natal chart, could use this power for good, to “manipulate” others and hive them good, and use it for the better.

As you were able to see, and just as we have said at the beginning of this piece, this is one of the most stressful aspects in astrology. Square is an aspect that represents lesson learning, stress, tension and pressure – or if we want to say it in a different way, all the ways that we are struggling with it. How we are able to learn and how we deal with stress and pressure.

So, when the Moon and Pluto are in a square position, such a connection indicates that people, who have this aspect, truly have difficulty expressing their emotions because this aspect blocks them.

In a negative context, people with this aspect experience a lot of stress and anger, which is not manifested. It is hidden, and often times they show it in an unhealthy way, using vices, and being in a world that is out of control.

They often deal with depression, inner pain and a lot of stress, and what is even worse, their work and love life are always connected and when one is bad other is also.

But things in their lives do not go just a bit bad, and they go in such extreme ways, they ruin their lives to the core (but the good news is that they can rebuild it from the ashes, and their lives could be even better after a failure.

One more thing is that the planet Pluto is the one that ensures that people will receive a second or even third chance in life). Their lives can be challenging, and it takes a lot of time and work before their lives are “normal”.

Often, these individuals had a stressful childhood, growing up in a home where they could not express their emotions properly. All of this affects surely in their future life, and in this sense, they can have so many problems in the love area of life.

Here, in this square position could occur that the Moon does not receive harmonic aspects from other planets (Pluto in this case), it indicates that persons who have it in their charts, cannot express what is happening within them, but use control to cover up the inner turmoil.

In some cases, this is the aspect that is one of the biggest indicators that someone is a skilled manipulator since it shows that emotions are manipulated, or that they love to manipulate others emotions.

This square shows that these people find it very difficult to release the traumas and bad things that have happened to them in the past, and if they had just one negative experience in their love life, they are never gain relaxed and carefree.

What is even worse is that people who have this square in their charts do not approach a healthy way to this problem, but they are acting worse and worse, until the ultimate destruction.

These persons often keep anger and passion in themselves, but when one crosses the border, they explode with anger, and then they surprise others.

If the Moon is in a good aspect with some planet, or as astrologers like to say, it shows that persons have the ease of letting go of all the unfulfilled negative things they pull from childhood or past lives.

But the problem occurs when that other planet is Pluto. These people could be born with some great talent, but at the same time, they are not able to use it in some constructive way.

You must also know that the planet Pluto represents a compulsive need that can be seen in also work area of life, and the Moon is related to the aspect of the human soul which is constantly immersing itself in the past that is afraid.

If you want to translate it, then you get people who are afraid of their talents, who do not know how to use them, they are scared of their past mistakes, and all of this makes them feel like they are exposed to a kind of complete emotional upset at the level of its fundamental security.

They are not weak, but they are scared of failure and in this sense, they do not feel strong but devastated, because they are not secure enough in their own hard work and their own talents (that they objectively have).

The main things are that these people do not prepare for a complete disaster, but to work on the process of nurturing their souls where the talent is hidden.

The Moon symbolizes the subtlest and most vulnerable in the human being, his soul – in it we can see compassion, need to forgive, and what is even more important innate capacity for the emotional understanding.

Pluto, on the other hand, symbolizes the deepest layers of the collective psyche, acting on an individual level through a point where a person is incapable of controlling his obsession.

Since squares, as planetary aspect, always create tension between the planets that are in it, it forces the person to act and confront them.

This is why the square always refers to life circumstances that we must learn to succeed through mistakes and painful situations.

What should you do if you have this position in your natal chart – realize that your soul is given to “remember” (the Moon) that painful experience (Pluto) are a normal part of your life?

Although contradictory sounds this way, it protects soul and soul safety from being destroyed again (Pluto).

This is the time when you must know that such an experience (by the existence of an aspect) still attracts and sucks her into the bottom of her black abyss (Pluto).

But it also protects it from becoming completely resilient and insensitive (Moon square Pluto). This very sense of threat and “catastrophe” dates back to the past, preserved in the female genetics that the person carries.

Since the Moon-Pluto square contains a lot of the unconscious that comes from the Pluto, and it is based on a conditional past experience that is connected to the Moon, people who have this aspect very difficult time managing this aspect.

Pluto on a deeper level describes conversions, running away from the traditional and doing something entirely unique and unconventional.

What is very unusual is that when we decline to face our “personal devils” and when we decline to convert from the source, then Pluto generates enormous confusion in all compasses of our lives. This is the challenging aspect that this planet, square makes.

This square that is formatted between Pluto and Moon encourages them (those who are under its impact) to pursuit exclusive relationships and particular experiences in which always there are a lot of emotions, and thus they go to extremes, into a situation where a part must be destroyed and buried (Pluto) for the other part to survive on life and could remember that experience (the Moon).

What we try to say is that this is the planetary position that can lead people to extremes; they can behave badly, and be toxic for their environment.

It would be very helpful for these individuals to go for therapy for a longer period of time and later to practice meditation – what they need to strive is relaxation, stress-free life, and the achievement of overall self-care.