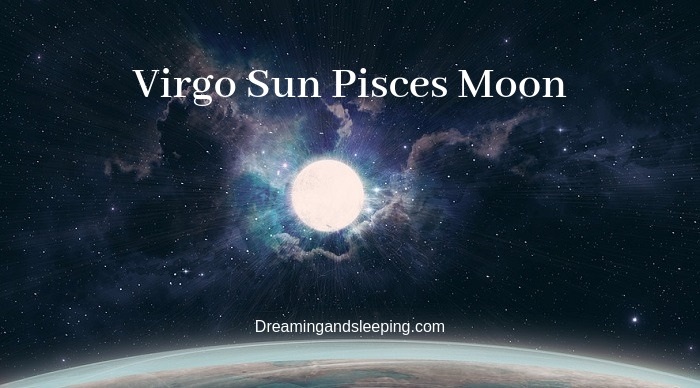 And in this sense, the Moon, as seen in the natal chart, represents the part of the personality in an individual that shows that other side that is defined by the subjective reaction to the “objective” appearance, or the complementing view.

And in fact, the position of the Moon brings a fragmentation that truthfully contrasts the apparent unity of the Sun’s image and expression.

So when we know both of these positions, we can make the whole picture of a person.

Today we are looking into the interesting life of the person who has Sun and Moon located in the Virgo and Pisces combination; many will say that this combination is not so good, but we ensure you that each and every person (as look at from the natal chart) has the place for growth.

The first thing that we must say is that the person who has Luminaries located in the Virgo and Pisces combination has some form of psychological duality that is resolved only in an alternation between one, precise and methodical character and one that is defined by the variable nature.

But, this could be a good thing, this human being can be controlled only with his own principles, and he strives to controls others on the same occasion. He can even be an efficient opportunist, who is worthy, generous, and who is offering everything to work for good deeds.

This is the person, who is able to live in his own rhythm, and he is the one that is ambivalent, sensitive, and this is often an unprotected nature that suffers just because of its inability to react.

Nevertheless, giving up in life is not an option for this person, and he is such character that he will willingly accept sacrifices for others, and submitting an immoral attitude will never be an option.

He is the one that will find the meaning of life in the attention of other and moral support that is necessary for such introvert character to grow. But when this nature succeeds in overcoming this attitude of giving up, which does not happen rarely, it shows the ability to grasp the true values of life.

When it comes to his bad sides, we could say that this human being is a creature who wants to reconcile the opposite intellectually and logically, while at the same times, he will be under the influence of others, and let be carried by the others ideas and in some way with the collective flow that may not be suitable for him.

He is the one that can be a dreamer who cannot cope with failure, and then he will even not try to do something, because he is not sure of success – the difficulties lead to resignation, and then he becomes discouraged.

But more importantly, a person who has Sun and Moon positioned in the Virgo and Pisces sign is, in a way, handicapped by its sensitivity, and this is the major problem in his life, that disables him from developing in the social sense, for example. This is a certainly an aspect that he must work on if he wants to have solid interpersonal relations with people.

He is the rationalist that tries to control mysticism that is brought to him by the Moon in Pisces sign, while the dreamer tries to find a stronghold on the firm ground – all of this makes him confused and divided deep inside.

The person with such luminary position is the person, who can be a lucid opportunist or a dreamer, and whatever type he is, he reacts very strongly to life, and this could be seen in his love life, where his emotions are very intense.

He is quite passive and often lives in opposition to his deep and passionate desires: this is the person who is incredibly attracted by what he cannot have. And in all of that “waiting”, he remains that person who has the great need for security in love, and that’s why he may often be able to hurt others. Or he may be hurt by others, in situations when his lovers do not want to be in that kind of relationship, for example.

Sometimes, for that reason, in love, this person lacks the measures, and for this reason, he is able to throw himself into some unknown experiences, in a mystical way. And emotions should be carried by the mystical or unknown, spiritual, but he must not be lost in this sense, and maintain just a little bit of reason; and he can do that (the Sun in the Virgo allows him to do so).

This is the person who has many unclear and chaotic relationships with others – he can even end up in the struggle between intelligent beings and the beings that are imaginative and irrational. This is the way this person behaves in love, but if he finds a perfect match, he can find that necessary balance.

In fact, this is the person who often feels strong sexual curiosity that is not exactly in line with a stable marriage that he wants to have, because the Sun in the Virgo leads him toward stability and comfort. It does not matter if this person can wander in love, for him, the best solution in love is to find someone that will take care of him.

As we have said, this person could be the type of person who can draw energy from higher sources, who can make the right choices with his good intuition, who can calmly and quietly work, have sympathetically relations with people, but remain somewhat distanced.

So, all of his lovers must be aware of this fact and accept him for his good traits.

When things in his love life do not go as he planned or he feels bad, then this human being easily lose power and energy. It happens that he shows his trust in the wrong people.

This is the person who is more sensible, more sensitive to the impressions and more open to everything good and evil that comes from the inner and outer world. When inner unity is achieved, this person receives a kind of complete human being that carries in itself the beauty and misery of the world, which reflects and understands his lovers.

And we think that the best lover for this human being belongs to the Capricorn Zodiac sign.

He is charming and can be a good match with the somewhat conservative Capricorn; he may be the one that will conquer this person and allows him to have the dominant role in this relationship.

Honesty, stability and pride are the main characteristics of our candidate that will make a Capricorn lover very happy. Although the differences are present, these two, in fact, a work really well and are perfectly complementary.

The only problem that may occur when both parties in this relation want to be in charge, and in this situation the Capricorn lover must give him a chance to be dominant, and at the same time to take this role from time to time.

Certainly this type of the Virgo (the one that has Moon located in the Pisces sign) is governed by strong idealism, intuition, but this is a person who, although at first sight, seems to be withdrawn, still, has something to show us with its thoughts, inner strength and will, but very favorable public appearance, can be very noticeable in public life. And in this sense, this can be the person who is noticed by others, and who may have many friends who show him respect.

Even if he can be irritating at times, he is a loving friend who is willing to sacrifice for others without any problem.

We also must say that he belongs to those people who are able to renounce their energy and to devote their knowledge to others. He is undoubtedly that friend in your life who can always offer practical solutions and ideas in everyday life; he has the strong senses and very strong reactions to others, especially in relation to the emotional partner or a friend.

You need to know, at the end of this article that is dedicated to all people who have luminaries located in the Virgo and Pisces combination that he is the one person that can carry a certain controversy.

In the case of this person, we can say that he sublimes the bright and dark, he is stable and moving at the same time, he can be firm when needed and vulnerable when life carries him in that way.

He is the one that is lead by his reason, and intuition and reason clashed in one interdependence that forces him to cooperate.

He has the chance to have in life so many psychologically enriching experiences and self-knowledge that will lead him toward success that is beyond every imagination.

Some say that this combination shows the complete opposition, because the earthly Virgo, who manages the mind in the sign with a watery Pisces that imagines, leaves, feels others. However, despite the great differences in energy very interesting soul, also the soul that constantly longs for those pure emotions,