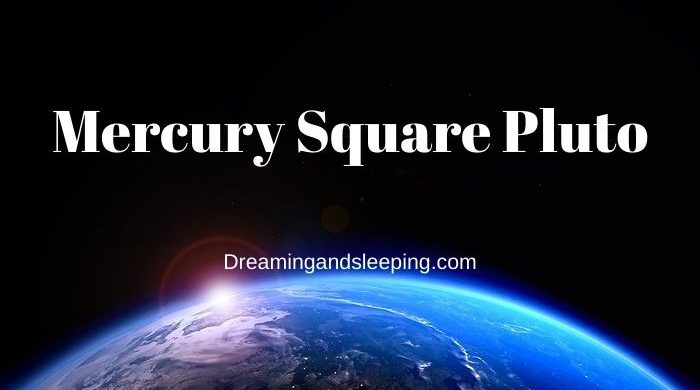 Astrologers claim that the square is an unfavorable natal aspect that is even better described as challenging and even further it is the representation of the strong forces that direct people to fight.

In any case, this is the aspect that is equally important, just like trigons and sextile, but the oppositions are another story.

It is the aspect that is most difficult and without the possibility of a solution, unlike the square aspect that could bring something good in the lives of those who have it.

In the case of the square position that is formed between planets Mercury and Pluto, it is not hard to see that you can describe it as an eternal derby between equally strong forces.

Yes, it is the representation of a constant fight, that brings “to be or not be” situation in the lives of those who have this aspect. The same case is when this aspect is active, on a global level.

Now we know from what perspective we should look at this planetary aspect, both on a personal and individual level – there are two forces that have power (Mercury and Pluto, that often show their hidden power, that exists beside the regular energy that is seen in the first contact with them), they are preparing themselves for something big that is about to come, and they will use whatever they have to win the fight, and you never know who will win, they both stand a chance to do so.

With intellects, without it, with flesh, they defended what is theirs, and they always strive for the victory, leaving the other defeated. Even more, the one that wins will enjoy the victory and will not feel sorry about the other one. 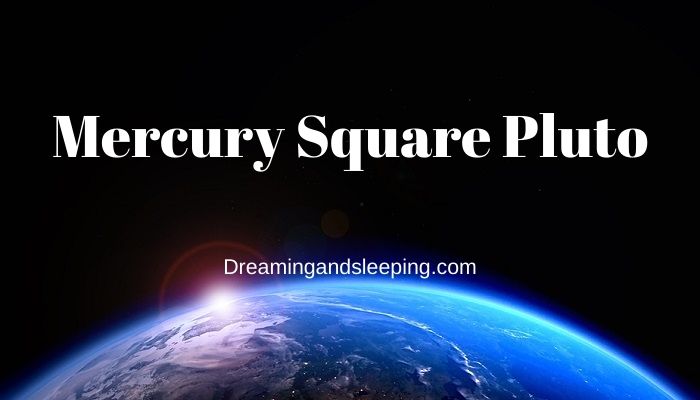 These are the people who are able to achieve some of their goals with the determination, but in the eye of a “regular” person, their ideas and goals are not normal.

Now, if you look at this celestial position from a positive perspective that is certainly very present, then you could imagine how those who have Mercury and Pluto in their charts are such fighters who are prepared for the struggle that is ahead of them.

They are driven and live for the life that will bring them victory because they will not settle for anything less. They will use all that they have just to reach the desired destination – success, the first place, the prize.

But they need to mature enough to realize that they cannot always go for the win, sometimes they win, sometimes someone else, but it is all about that dedicated struggle and the idea that they deserve the best.

The main thing is that these people play this game of life in a way that it deserves to be played; they need to understand the game must be there for the encouragement to be better, stronger. And no one has said that it is not difficult, it is uncertain, sometimes overtime is played, sometimes others spoil it, but they should not give up.

Remember that in this square position, words (Mercury) have tremendous power (Pluto) – all good and all bad can come from it. And once again we must emphasize on how important it is to find a balance between the two.

Because of such potency in this square, people who have it in their natal charts rarely express a happy mental balance – they are problematic in this way. And you would be surprised since this range of their emotions and behavior goes from blind devotion and dedication to pessimism, stress and anger even.

If they overcome it, they can become successful members of society, but this happens for some, others just fall deeper into the darkness.

These are also people who are able and want to accept unnecessary risks that “successful” life carries – this is seen in their work, love, everything, and this is the point when they lose themselves in the fight, and nothing matters anymore.

People who have this aspect in their natal charts have one more “bad” trait – they are generally those who overestimate themselves, overestimate their own strength, and all of them, as a rule, carry a dose of fanaticism (in some cases it could be seen, others control it, and some others suppress it or direct in another way).

In their work environment, they must be extra careful, since they like to gossip, and their worries could float to the surface. In the worst-case scenario, these are the people who are obsessive, and they nurture paranoid (Pluto) thoughts (Mercury).

Have in mind that all of this that we mentioned and in order to be so negative must have its “confirmation” of the rest of the horoscope, or natal chart. This does not have to be the case if other aspects are positioned in such a way that they overcome these and similar obstacles.

Love, for these people, could be the same as anxiety and pain, and it usually is – it seems that when these people fall in love, they are slowly but surely losing their mind under this pressure, but will be intensely considering all the ideas and the concept of getting rid of unwanted activities (those that do not lead toward love and full dedication).

What does this mean? When they fall in love, this becomes the game of their lives, and nothing else matters.

They are attracted to people and affairs that are forbidden to them; whether they have previously rejected it or it was far and inaccessible to them (you can see them as people who are in relationships that shock environment they live in, with older or problematic partners.

What attracts them is the interest in the discovery of the deep truths and things that have long been carefully hidden.

Their best match is someone who understands their unique way of thinking – their reasoning about things is profound, and a chosen lover must feel the same about the world.

They will also gladly accept to teach their lovers about life, so someone who wants to be with a dominant lover is also an option for those with this aspect.

Have in mind that the square position is the one that is the symbol of a fight, but it is the one fight in our lives that shows are we are alive, and how much we will fight for the success.

These people are because very harsh when they are saying (remember that the planet Mercury is always responsible for the speech and communication in general), and they do not ever hesitate to call things by the real name, so they can show fantastic tact and diplomatic skill.

This is their driving force – they love getting others around their ideas.

They will succeed in researching in detective work, medicine or psychology. This aspect is good for new forms of expression in every area of activity, art also.

They need to learn not to overly doubt everything that is said, to be dominated by distrust, high levels of mental stress and pressure if they are at work, and they are doing something they do not like. Do not indulge in a dubious interpretation of what has been said – reading “between the lines” will only worsen communication with their colleagues.

When it comes to working and their chosen way toward success, for these people, intrigues and abuse of power are normal and psychological complications slow down their normal communication, resulting in conflict and work relationships.

Circumstances cause frustrating difficulties where they feel powerless. Fear of lack of confidence will make it difficult to solve current problems that they have in their jobs, and in some way, they will never reach their full potential.

Also, they could have a problem with authority, and in some way, it is better for them to work alone, or to occupy some high position from the start.

The night sky that has this aspect active gives you challenges, and now is the time in your life where it gives its strongest influence. It is the time dedicated to all those who have some power or want to have the power to demonstrate it in a way that is not ordinary.

All of us must know that the energy that this square position brings can be very destructive, and even violent, particularly in a verbal sense.

On the other side, know that at this moment you have such energy that everything is possible, for example, things that seem impossible will turn out to be real, and those who are hiding their identity will reveal themselves.

When we say they will reveal themselves, and this just means that some part of personality could be discovered, even unintentionally, but this square may produce a feeling in people that they have a need that they cannot suppress to open and tell the truth about themselves.

That truth could be disturbing for some, and in the process, they will lose a lot, but in the end, those who do it will feel better.

What this square also says to all of us, on a general level is that we must be careful when we are talking to others, not to tell them our secrets because they will be misused. Others will try to impose one’s opinion, though that might be expected of you towards others.

Someone might try to demonstrate power and control, and this is the time when people should deal with obsessions – from an obsession with others, but the worse is where there are obsessive thoughts.

Now, have in mind that this is a short-lived aspect, so what matters is the character, but generally, it can bring about some and the least kind of (instant) obsession. It can blossom at that moment, and it can disappear as soon as this aspect passes from the night sky.

Avoid engaging in games of power and extremism, avoid threats and fierce conflicts. Approach logically in difficult situations because Pluto most often evokes obsessive tendencies but also fears of unfavorable development of the situation.

In the time when this square is active, use all the benefits that bring – the square of Mercury and Pluto brings sharpness in speech, so do not hesitate to call things by their real name even though you are mistaken.

Try to avoid problems and to develop a diplomatic attitude and avoid unnecessary risks. Avoid things that are mysterious and preparing to take control of the situation with a bribe.

Postpone the exaltation of the plans you have devised in an attack of rage, think about the long-term consequences. Nervousness is possible, and you should focus and meditate.