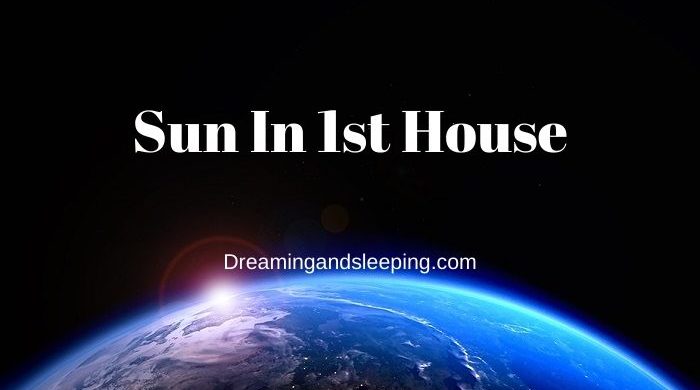 The sun at this position gives a personality that wants and needs to realize itself instinctively. Where this is not possible, there can be considerable frustration.

If you have the sun in the first house, you should face life with enthusiasm and determination.

When the Sun is found in the 1st house of natal we get persons whose presence and strong personality shines like the Sun itself.

But with all that attention, they can feel too self-conscious or easily upset.

Properties that are closely related to the natal Sun include directness and awareness of what a person desires.

So the Sun in the 1st house gives you the security and the feeling that they could conquer the world.

The enthusiasm these individuals possess is extraordinary, and their determination is unbreakable. You should always follow your intuition, as it is the surest path to happiness.

If there are some things in their life that make them unhappy, it’s always the right time to change that. When they decide what they really want from life, it will be easy to accomplish.

They should look back on their dreams and goals, and make sure they are well on the way to achieving those desires. If not, when they make a priority list they will undoubtedly reach their goals. 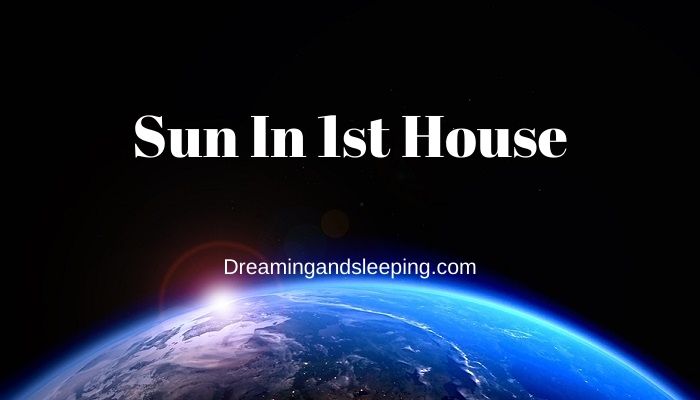 People with Sun in Natal Field 1 are capable and willing to move everything in the desired direction, as long as they maintain their focus. It is easy to let go of the challenge and excitement that comes with completing certain tasks, so much so that they can forget about the original goal.

It is important that they know the best path to achieving a goal, and do not deviate from it. This means that they do not have to worry so much about what others think of them.

Because people born with the Sun in the 1st house care about what they think is important to them, they are aware of how they look in the eyes of the beholder.

Show yourself and present yourself as you are, according to your personal idiosyncrasies. Maintain your image and stand up for your wishes and ideas.

But make sure to be real. The sun in the first house could tempt you to show a great facade to the outside, but not really bring yourself into the world and just want to reflect yourself with an ambitious masquerade. Also make sure that you do not act overzealously or become domineering.

Be aware of your individuality and stage yourself with self-confident demeanor and show who you are and what you can do. You can impress with your life force and cast a spell over others. You will be noticed by people whether it is pleasant for you or not. Self-identification with the I, your person, I, is one of your central life issues.

You will show yourself spontaneously and, depending on the sign, also risk-taking and enthusiastic. You can assert yourself and assert yourself in a completely natural way, you can also influence others.

You are emotionally or instinctively instinctual in asserting yourself. You easily close yourself to others and are disappointed if this is not the case in reality.

Your strengths are independence and initiative, as well as the willingness to do pioneering work. You can stand up for yourself and you should do this, because the being must be able to shine and you have to set up your life so that your self can fully develop. But as I said, please don’t be selfish at the expense of others.

This can be good or bad, depending on their reaction. If other people have a positive attitude about what they are doing, they too get that feeling. But if one has a negative reaction, they can easily become depressed. The advice is that unless they affect themselves or someone else in a harmful way, continue with their original plans.

There will always be those who have something negative to say, and it is up to these individuals to decide whether or not to attach importance to it. They should take more care not to overdo it in some things. You should not impose your ideas on others, nor be too bragging about your current business plans.

Challenges of Sun in 1st House

The sun in the first house often indicates the extroverted, energetic, expressive, temperamental and dignified personality of a cheerful spirit, firm character and unwavering and unwavering will.

In the case of this sunshine position, the emphasis is on affirming the personality herself and on enhancing the purposeful awareness of her strengths, virtues, qualities, abilities and talents by which she can achieve many of her life’s ideas in the fastest and most effective way.

The indication of success is thus manifested in various segments of life through the investment of greater personal effort and engagement and giving of one’s own maximum.

A strong personality full of confidence is well tolerated and demonstrates the ability to rise above the situation in extremely difficult and harsh conditions, to be able to fully control himself, to maintain his dignity and to preserve the integrity of his personality, giving the impression that he feels invincible.

He often sees obstacles in his life journey as challenges that he wants to face boldly and boldly as soon as possible and overcome them so that problems do not deepen and worsen.

It often leaves a strong impression on people from their environment. In all sorts of circumstances, it matters to her what impression she will make and what will be said about her.

The position of the sun in the first field often reveals an affinity for enjoying life, in the highest values ​​postulated by the soul of this being, eager to conquer high goals.

These highest values, as the fruit of hard work and hard work, can relate to different social spheres and areas of life and represent the desired satisfaction that can provide a sense of greater security.

Are very fixated on themselves. In the negative case, however, exaggerated selfishness comes to light, so that they basically think of themselves first and then of others.

People with sun in the first house are very determined and ambitious. They show a strong will and do a lot for their creative self-realization.

These people have sufficient vitality and regenerative power, which they can quickly get back on their feet in the event of illness. Her fighting spirit is also expressed in her striving for success. So they don’t mind overtime or hard work to gain reputation and appreciation.

These individualists take a lot of courage to achieve their goals, because they absolutely want to be recognized and valued as a personality. That is why they strive for a leading position, while supporting their pronounced self-confidence as well as independent and entrepreneurial action.

Therefore, they do not like it when others are in charge and are happy to oppose it. They prefer to lead others, but they have a tendency towards domination.

House one is one of the most important houses we find in our natal chart. Like the Sun, which is the planet that stands out the most within our radix.

Wherever it is, it will be the place where by destiny we must shine. We can deduct from this that when we find the Sun in the dome position of house 1, we already find in itself a powerful and strong personality, especially if there are signs of fire.

The Sun in house one, being this angular and containing the Ascendant, can lead us to share sign of Ascendant and Sun.

If this quality were given, we would be in front of a person with the external and internal personality quite marked and impregnated with the energy of that sign.

House one is the most important area of ​​the natal chart, it shows our external character. It is that personality that we show people first and is given by the energy of the sign that inhabits this sensitive point.

The Sun is our innermost personality, more ours, the one we only show when we are truly known. When the Sun is in the Ascendant area, the degree of confidence that the person has in itself rises to the clouds.

This happens especially if the Sun receives good aspects, since with bad aspects such energy would be misdirected in the individual. People with the Sun in house 1 are people of strong temperament, who shine on their own, and who have a certain air of nobility.

However, the position of the planets by houses reflects their destiny. The house where a planet manifests itself is the area of ​​life where its influence will be especially noticeable and the houses it governs will also notice its influence, but more indirectly.

Due to the above, in predictive astrology the position of the planets in houses is very important. It will influence all your affairs.

The influence will be positive or negative depending on whether the planet is beneficial – Sol, Venus, Jupiter above all – or malefic – Moon sometimes, Mars, Saturn above all, Uranus, Neptune and Pluto.

Also, depending on the dignity that the planet has, then, a well-placed malefic planet – for example Saturn in Capricorn – loses some of its negative effect.

A badly located beneficial planet can make something seemingly good bad – for example Jupiter in Gemini, it can make Jupiter dissipate and be superficial rather than wise.

On the other hand, it will also be necessary to consider that the planets on the cusps of the houses have more strength over it – and I say strength, not dignity, we must distinguish between strength and dignity, or if my readers prefer quality.

Well, for starters I will talk about the Sun in the house me. It is one of the best positions in astrology, both to enhance vitality, security and self-confidence, as well as to rise, shine and achieve success in life.

Physically increases vitality considerably, and in the psychic field it strengthens the personality, which tends to be imposed on the surrounding environment, either dominating it or affirming its independence.

Both for their way of being and for their outward appearance, people with the Sun in First House shine or stand out among those around them. It is a position that especially favors the cultivation of qualities such as courage, dignity and nobility.

It produces enthusiastic, generous, magnanimous natures. The natives are faithful to their feelings and firm in their convictions, as well as born leaders, born to guide other people.

They are randomized by a strong ambition to stand out and succeed in life, or to chart their own independent and autonomous path.

They fight to shine or stand out among their peers, because inside they feel like kings and want to be recognized as such. They are active and passionate, tend in general to an athletic and resilient constitution, as well as a great personal magnetism.

Frank and direct, they love clarity and beauty, rejecting both what is dark and vulgar. But if the Sun receives tense aspects of malefic planets then it can give a sharply selfish, arrogant or arrogant personality.

As an example and curious note, you can see that the last two presidents we have had in Spain have the Sun at first house. Which seems to me a significant coincidence.