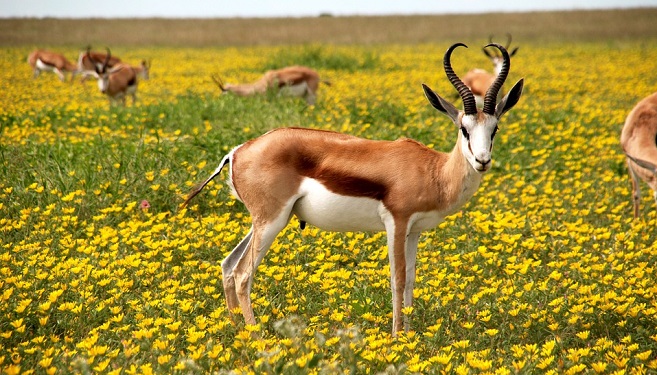 Antelpes are elegant and gentle creatures that amaze us with their grace and resistance. Antelopes inhabit big parts of our planet.

In symbolic way, antelopes are representations of intelligence, resistance, grace and elegance.

For centuries people slowly adapted these wild animals and even managed to domesticate few species.

From this relationship, an antelope symbolism has risen and stayed even until today.

Intelligence – Antelopes have many enemies and the only way they can survive in the wild is by outsmarting them.

They are not built to fight them or scare them away with their appearance, so tough life situations taught these animals to use their brains to survive.

Energy, speed – Antelopes, especially those that live in dangerous surroundings, use their speed to escape large predators.

Antelopes can run pretty fast and, if they notice danger in time they can easily escape almost every predator.

Antelope as a totem

As totems, antelopes are symbols of elegance, high energy levels, communication and wisdom. People born under this totem or protected by it are very intelligent and they use their knowledge to advance in life. The first person you are going to look for advice is a person born under this totem.

They simply have a special way of understanding situations and learning what they need from them. Combination of rich life experience and curiosity makes them ideal advice givers and right hands for everything in life.

You will rarely get a confusing answer from them since they are going to give you their honest opinion over anything. This makes them great friends and partners that are always going to be there when you need them.

Antelopes symbolize elegance and grace. Everything these people do in life, they do it so it doesn’t stain their reputation. Since this often means boundaries in life, it might be considered one of their flaws.

Instead of making mistakes and enjoying life to the fullest, they tend to go down the safe road until they reach success.

They are graceful in the way they talk and converse with others, so to some people this might look snobby. Of course, this behavior is not intentional, that is simply the way they are.

Antelopes are symbols of high energy levels so action with these people is guaranteed.

They rarely sit at home and spend their days in solitude, instead they love going out to the world and meeting new people and figuring out new ideas.

Overall, these people are very energetic, open people who have certain standards in life that they won’t ruin.

They are very intelligent and especially caring towards people in their life, which makes them good friends and partners for a lifetime.

Antelope as a symbol in dream

Antelope in a dream can have different meanings, but if you saw one while asleep this means success through effort.

Antelope in a dream symbolize great deal of success that is going to be achieved but only if you give a lot of energy into something you are working on.

If antelope is laying down, then this dream symbolizes an opportunity you are going to miss if you don’t get moving.

Dead antelope, however, symbolizes an opportunity you’ve missed and that is never coming back to you.

If you had a dream about an antelope running, then this dream represents your desire to break out of comfort zone and do something exciting.

Antelope as a symbol in different cultures

Antelopes have been in people’s lives for centuries. Since old religions and cultures were based on animals and totems, antelope symbolism got born a long time ago.

In Eastern practices, antelope horns were considered to have medicinal and magical powers and some of its symbolism is still present today.

Antelopes are highly respected animal in Africa. In Congo, antelope horn is believed to confine spirits.

Many tribes in Africa make masks that are inspired by an antelope appearance. Antelopes also symbolize good harvest and many believe that antelopes taught people the secrets of a good harvest.

In Christianity, antelope horns are sometimes used in iconography to represent the Old and the New Testament. Because of its speed and ability to run fast, antelope was often linked to the God of Wind Vayu, in Hinduism.

In Native American culture, antelopes were clan animals to some tribes. Most of these clans were from South America and they honored this animal through dance and religious ceremonials.

In modern culture, antelopes are still considered to be interesting and beautiful creatures that reminds us daily how grace and strength can work together.

Their symbolism remained intact over centuries and it is interesting to see how different cultures had the same symbolic vision about this animal.

Antelopes symbolize grace, strength, intelligence and as totems and spiritual animals, they are representations of a strong character and a powerful totem.