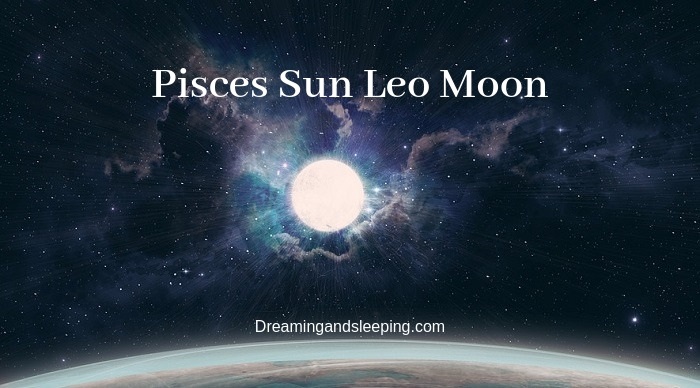 People often ask astrologers when they are in some kind of a doubt, about the courses of their lives, where they are going to go, and what kind of their life is going to be, are they continuing to be successful or not, and in what areas of life?

They often say that they are going to a rough time and that they are standing in one place for a long time, or like everything is falling apart, etc.- this is the moment when an astrologer can help you very much.

The fact is that all of us have our ups and downs in lives, and astrology assures us that if we follow its guidance, we can make something meaningful in our lives, or at least avoid some trouble and pain.

The simplest way is to listen to what our luminaries have to say to us, and in today’s case, that opportunity has the people who have Sun located in Pisces sign and the Moon in Leo sign.

Can these two so different signs make some sense? Read all about this.

Yes, they can, in case of some people who have such luminary, position can succeed in expressing the best part of himself, putting himself in service to a human, spiritual, even some sort of sensual ideal, or dedicating himself to loved ones – in that way he can succeed in unifying the characteristics of both of these signs.

He has many ideas that are very high and altruistic (the Sun in the Pisces), and he knows how to realise them (the Moon in the Leo).

In that case, he is the one that can trigger the ideas that can make some difference in the world, and he can even crystallize and revive them.

The best case scenario is when those ideas can give some meaning to his life, and then this person becomes very happy and useful in some way. He has the impression that he has succeeded in life.

So it is all up to a point can he use the best of what he got in life, then he is the best person ever.

But as expected, this human being who has Sun and Moon located in Pisces and Leo sign has so many issues in life that he needs to deal with so that he could be happy.

When he cannot affirm himself as a complete person, when he cannot provide a complete image of himself, he desperately tries to differentiate in the eyes of the people so that he could find some purpose in his life.

Of course, looking at these different tendencies which do not make anything meaningful is just a waste of time.

Another problem comes at the moment when this human being shows a constant need to shine above his abilities, instead of focusing on his true abilities, regardless of how small they could be.

Even worse, this is the person who shows a constant concern for others, and the problematic part is the desire behind it – he thinks that this will lead him into better social life, that he is going to be in a privileged position. He will not, and just will fall into mischief; so he will lose once again.

In love, this human being is prone to idealising his partners and is often dreaming about great, eternal and unique love. He often spends his time, energy and money just to show how much he adores his partner. He dreams of a world in which everything would be perfect, and the reality is often very different, and he is hurt when he finds out the harsh truth.

But, in some other way, this is the person who knows that deep inside he is always looking for solid support in love, from a lover.

He is very romantic and an idealist in some way, yet if he has not mastered the lesson from generosity, he can be stubborn and undisciplined and make some serious mistakes in love.

One thing needs to be remembered here; by nature, this human being is self-centered and proud, he knows how to get involved, he can be very social, he can be the creator of an amazing love story.

But the Sun in the Pisces is strong, so his behavior can vary from excessive exposure to restraint, so his environment (lovers in the first place) never knows who it is dealing with.

The fact is that the person who has Sun and Moon in Pisces and Leo signs is very emotional and knows to love deeply, almost fanatically, but he is also the one who knows how to hide deep his emotions.

Of course, he is afraid that he may get hurt in a love relationship, and regardless of his attempts to avoid that scenario, he does get hurt. In his case, the thing that he is the most afraid often comes to him.

He is particularly vulnerable to love problems, and this is the problem that he does not want anyone to know they do not really like to share with others.

In fact, this is the person who firmly believes in fate, and he believes that he is connected to people on this level, and especially it is true in love. So he knows that he makes a very important decision event either bad or good; he knows it on some deeper, intuitive level.

His partners are usually those who fit into role of an exoteric, cultural and measured persons  who are firmly on the ground and who know what they want from life, and this is truly one combination that works really well.

In the end, we must say that this human being has one line in his character – he is never interested in what others think, but how he feels.

It is very important to him to be responsible in a love relationship, to be taken seriously and to be valued from his lover.

The Moon that is located in the Leo sign in this person gives a longing for the lights of the stage, by nature he has a dramatic attitude, and he is in his element on the stage and in front of the audience – all of his lovers must be aware of this fact.

But they also must be prepared that he is very emotional and that he can enter a phase where he is shy and want to be left alone. After the first meeting with the person who has Sun and Moon located in Pisces and Leo sign, people are impressed with his deep feelings. He demands a lot, his mind is rich, but what he wants is not always real.

The perfect match for such a person is the one who is born in the Zodiac sign Scorpio.

This hot pair will share a lot of passion, but they need to watch not go from extreme to extreme. Things in their love relationship take place at lightning speed, their reactions can be pliable, so this is one very interesting and turbulent love affair, or love affair or marriage.

At one point they are together in the enthusiasm of their love in sweet love passion while in the next they are opposed. If they try just a little bit, these two can last very long, and we assure you that in their love affair it will always be a passion.

As we have said before in the life of this human being these two luminary positions are not well connected, one, the Leo expresses the sense of self-consciousness, and it does not go well with the Sun in Pisces, which feels quite different to one’s own personality.

But, this combination gives amazing aspects – this person radiates security and protection to his friends.

All of them must be aware of the fact that he sometimes wants to be at the centre of the event, and the other time he will be dragged into the background and in loneliness.

This combination may be good if he finds a goal, a public interest that he can dedicate and surrender his soul and body, giving his personality a higher meaning at the same time.

Then his friends and all the people who are around him can benefit immensely for such a person who is ready to give the best of him to make things changed.

There is no doubt that this luminary combination expresses a certain awareness of its strengths (the Moon in Leo sign), although this is often the cause of internal conflicts cause the Sun in the Pisces does not open so easily.

This stems from the fact that the prevalence of the characteristics of the Leo, which is directed towards personal affirmation and the proving the best for himself, especially in some emotional sense, and at the time of the trait that arouses the senses and spirituality of the Sun in the Pisces.

So, we could say that this is the person who is looking for ways to impose himself in some way and make some changes in life.

Others are interested in this human being in many ways and want to be a part of his life because he is complex and very happy to communicate with others when they are in a positive state of his soul.

In some other times, it is better to leave this individual to be alone with his own demons.