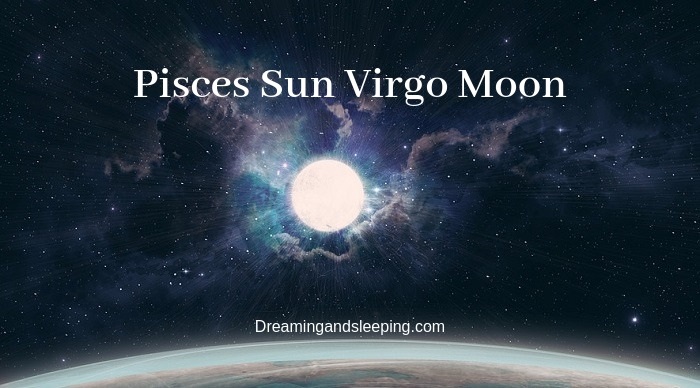 When we want to speak about the luminaries, about the Sun and the Moon, we must know that these two celestial objects are very special in Astrology and that for building that natal chart nothings can take their place.

They have an important place and combining them we can get almost enter a picture of one human being, his life, emotions, and interpersonal relations.

In other words, a person can be analysed by knowing these two positions.

Today we are focusing our attention to the people who have Sun located in Pisces and the Moon located in Virgo sign.

You have probably wondered how is this working since these two signs are in many ways different, but we assure you that in life, and as well in a horoscope is not so simple.

If we want to look at all of the good and prosperous traits that can truly lead this human being into some success in life, we can say that he can be a modest opportunist, who is worthy of every success that will come his way, cause he can make it with his hard work and dedication.

He is also the very generous person, and even a human being who is capable of providing everything for good deeds – this is true for everything in his environment, and everyone that is close to him.

We could also say that the person who has Sun and Moon located in Pisces and Virgo signs is the one that lives by his own rules, even if others do not realise them yet; and he has a way of doing things in his special inner rhythm.

And in his nature that often suffers because of his inability to react in the way that he would want to, there are many good things that are connected to his heart and emotions.

Primarily we mean that this human being is more than capable of triggering feelings, although it is always logical and adequate, so he can maybe be the perfect example how these two (mind and heart) are well incorporated in one person.

This can also be the person who constantly lives in the passive expectations that the better days will come, and he is tormented by the continuous internal search and an unbearable study of the opportunities that come in his way.

His strengths are muted with fears and complexes of inferiority, more imposed than real, adopted as a defense against difficulty in life – this is maybe the biggest flaw in his character, and this is the attitude that serves as a sanctuary where he feels safe.

This situation often comes when he feels uncomfortable or fail to understand the causes of the events; he cannot comprehend that some things are just out of reach.

There is no doubt that this human being on some deeper level wants to reconcile those sides that oppose one another intellectually and emotionally.

In the end, this is the person who is handicapped by his sensitivity, he is seen as the rationalist who tries to control the mysticism, while the dreamer tries to find a stronghold on the firm ground. And sometimes he just cannot find it, even if he tries so badly.

One thing makes the life of the person who has Sun and Moon located in Pisces and Virgo signs miserable – his tendency to make things perfect. This is the aspiration in love that makes this human being so very hard to love and to be in love.

He has a great need for security in love, and many of his actions in love are directed to it; even more this human being strives to self-control, and he lives his life by avoiding adventure.

Such behavior generally keeps him away from dangers and heavy blows in love (and life in general), but in the end, it could close him in one very one monotonous life.

He can end up being that one human being who has maybe one or two lovers, and nothing more and in between.

But on the other side of the same story, this is the person who loves life very much, he loves enjoyment, but there is an inner voice that constantly reminds him to stop, to accumulate all impressions, collecting them to the maximum.

There is no doubt that this voice belongs to the Virgo (the Moons location) – his life, and emotional life in particular sometimes pass by him.

Emotionally a person who has Sun and Moon located in Pisces and Virgo sign is not really easy to conquer, and in the previous section, you have seen why this is the case.

There is no doubt that this human being is beautiful and attractive for many, but he is not always satisfied with himself and thinks that he can always do much better – he thinks that no one is always good enough for him.

This human being is aware that his emotions are vulnerable, and sometimes he finds it difficult to deal with painful or problematic relationships that he can be a part of (more than once).

Anyone who wants to date this person must be aware that he loves things that are secretive and mystical, and that he may shy away from the open communication, that he would opt for something mysterious.

More than once in his love life there can be an experience of the unusual attraction of others, where he would date a person who is not suitable for him, and/ is seen from the side of his friends as someone who does not belong by his side. And it is surprising how this happens even in a time when he chooses so vigorously for himself.

He knows that he is worth more, although he cannot see it from outside, he can expect very much from himself and others.

But in the end, we must say that this is a love that strives for unusually fateful love relationships, but he is either in a long relationship or is alone, there is no middle ground for this person.

People often fall in love with him, as he shows an extremely genius and original ideas, but may be rejected because he loves freedom very much and does not like to be pressured by anyone.

So, we can conclude that this human being needs a lover who will share his strong dreams, who will tell him that he is loved a lot, and then he can relax to dedicate himself to his career and social status without burdening.

He avoids love connections where this kind of connection is carried by people who have unordered emotional relationships because of work and vice versa, so the choice of a partner is very important.

The perfect match for him is the person who is born in the sign Taurus.

This is a very interesting combination of two characters in love where, after good acquaintance, mutual understanding and trust on an enviable level -these are two lovers that can have lasting relationships, and that can build a family together.

It is much easier for such couples than some others to find a common language because they share the same value in love and life also, so we can say that these two are more than compatible. Their desires, needs and goals in most cases fully coincide, so if this is one person in love they choose, they can be sure that it will last.

This human being is so connected to his friends, and he may not have it a lot, be he will have a few loyal ones that will stay by his side no matter what.

The person who has luminaries positioned in Pisces and Virgo sign never ever forgets old friends, but he truly can be very sceptical and distrustful of the new environment -he rarely, almost never accept new people in his environment.

His trust needs to be earned in life, and not many people can do it, but those who can consider themselves lucky, cause they have a friend who will be by their side forever.

In social relations, this human wants to rise above others, and he has a specific taste when he chooses people who will be his friends.

This type of Pisces (with the Moon located in the rational Virgo sign) is very rich in controversies and serious contradictions -he is lead by the emotions but he is often guided by the reason, or in some other words he can be tournaments with his mind.

On the one hand, he has the pronounced need to classify everything, to put things in a rational view, and to live in one world that is very concrete world. When we look at the things from another perspective this is the person who is everything opposite from this – he is emotional, fragile and has a completely “artistic” ambiguity.

To sum up this story, this is the person in whose life, light and dark meat, things that are stable and moving, intuition and reason, clashed in interdependence that forces them to cooperate.

But there is an opportunity that his inner unity is achieved, and we meet a person who has achieved a complete circle – he is the human being that carries in itself the beauty and misery of the world, which reflects and understands people who are close to him in many ways.

Thus, this double nature has the chances of psychologically enriching experiences and self-knowledge.