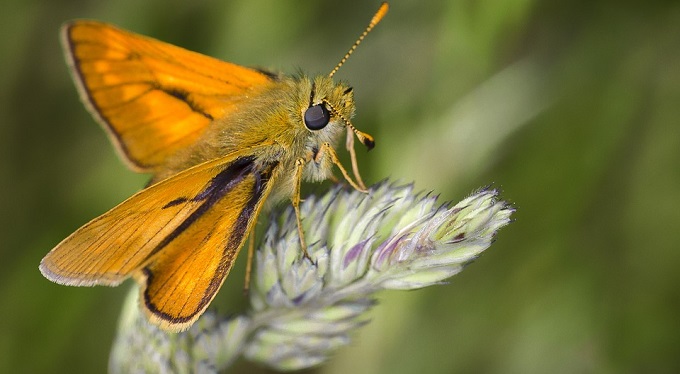 Moths have many similarities with butterflies, but the one thing that separates them from butterflies is the fact that moths are nocturnal animals. They wake up during night time in search for food and stay away from sunlight during the day.

Moths can be seen as the darker side of a butterfly. This insect represents everything that is a total opposite of a butterfly, but it also has many things in common. A personality that is best described through moth is, the person with a good connection with his inner-self and someone with almost mystical powers to predict the future.

Moths have been linked to the dark side of magic for centuries and they are popular in this symbolism even today. In popular culture, moth tattoos and drawings are used to represent deep insight in one’s soul and mystical understanding of the other side.

Nocturnal – Like I mentioned earlier, moths are nocturnal animals. These insects spend their lifetime hiding in the shadows and waiting for night time to arrive. Much like them, people represented by this animal love being alone with their thoughts and emotions, and don’t like showing them to others.

Pests – Although moths are interesting creatures, they have been known as pests for centuries. People struggled to find the reason why their crops died and withered, until they discovered that moths play a major role in this. Moth larvae can cause significant damage to plants and crops, and people have been fighting to get them away from their gardens.

Fragile – Moths, just like butterflies, have gentle wings that can be broken or smudged with only a medium light pressure. Moths can grow up to a centimeter or two, but they are usually quite small. This is why killing a moth is much easier than exterminating another insect. Their outside doesn’t have a strong shield or cover that can protect them from impact, so they are very fragile.

Now that we have basic guidelines to understanding a moth, we will focus more on its symbolism.

Moth as a totem

Totems reflect our personalities through animals. They are a good way to get to know your true self and understanding your own strengths and weaknesses.

People born under the moth totem are very sensitive. This comes as their main characteristic and some might think of it as a flaw, while other might  consider it to be an advantage. As an advantage, people born under this totem can sense needs of other people more easily, which makes them better friends, partners and parents. But, on the other hand, being so sensitive for other people’s needs, makes these people too worried about others and not enough about themselves.

If you are born under this totem, you will have that need to help others and make them feel better, but, being so sensitive will make you feel down and depressed when the same amount of care isn’t given back to you.

People with this spirit animal or people who are born under this totem are great teachers, social workers and psychologists. They have that, almost magic way, of listening to someone’s needs and understanding someone’s needs.

People born under this totem almost have psychic abilities. Many people born under this totem are, in some way, connected to the „other world“ and can sense that spiritual side. While most of us go through our daily lives not even thinking about that possibility, „moth people“ often find themselves sensing that spiritual side present in their everyday life.

This might be presented through a lucky coincidence or even a stronger sign or a symbol, coming from the „other world“. This is why people born under this totem have a strong faith in the divine and practice some sort of religion. Their faith is not like everybody else’s, since their connection to the divine is more pure and honest.

People born under the moth symbol or totem are often hiding from others but also from themselves. They don’t like expressing emotions and sharing their deep feelings, but they enjoy listening to other people’s thoughts and emotions.

Being so secretive and mystical, makes a person born under this sign a really mystery to crack. You won’t get to know this person easily, and even when you do, he or she will still have a lot of skeletons in the closet.

To some people, being so mysterious is attractive but to others it is just a sign of you not believing this person. If you are born under this sign, then intimacy is something that needs more work, because keeping things bottled up inside forever is not going to help you form meaningful relationships.

You are also a person who likes to think positive and see life as a place of endless possibilities and opportunities. You will rarely catch yourself being depressed about life, which makes you a great person to be around. You are a loyal friend and an honest partner, who is going to do everything for your loved ones.

Being subtle is another trait of these people, and even though their approach to the opposite sex is almost unnoticeable, it is definitely effective. People born under this totem are very attractive to others and their approach is subtle and graceful.

You are a person who doesn’t like attracting attention with aggressive behavior or vulgarity because you know that the secret is in this milder approach.

One of downsides to being born under this sign is that you are very fragile and worrying too much about others or being to sensitive to outside influences, can make you become bitter over time. Moth often symbolizes weak minds and weak characters, but this is only true if a person born under this sign, gives in to the wormhole that is her own mind. Express your emotions and stop locking in your feelings, until they completely overwhelm you.

Moth as a symbol in a dream

Symbols in our dreams are there to reminds us about things we forgot and things that are buried deep in our subconsciousness. When you try to interpret a symbol, you need to take other elements and symbols, from your dream, in consideration. This way you will get a fuller image of what your mind is telling you or perhaps what is the secret meaning behind your dream.

If you saw a moth in your dream, then this dream is a warning sign that you should get more in touch with your feelings. You have lost the connection with yourself and you can’t even explain your own actions and words. Find meaning in your life again and get back to being yourself until it gets too late.

If moth in your dream was dead, then this dream is a sign of possible break up between you and someone very dear to you. You are going to lose that connection you had before, and this might happen because you were too preoccupied with yourself. If this person is important to you, then you will find a way to get back in touch with her and make your relationship the way it was before.

If moth in your dream was flying to the light, then this dream is a representation of a desire you secretly have. You are too afraid to express your inner emotions and thoughts to others, because you are afraid how they are going to take it. Instead of imagining different scenarios, gather your strength and express your feelings once and for all.

If you dreamed about many moths, then you are feeling stressed and overwhelmed with other people’s desires and needs. You feel like you are being torn apart or buried in those needs, while your own needs stay unattended. Your first step should be setting up a boundary for others and starting to pay more attention to yourself.

Moth as a symbol in different cultures

Moth has often been used as a symbol on many different cultures. In Mexico, moths are considered to be carriers of bad luck. When a person is ill and in bed, if a moth enters the home this person will certainly die. Mexicans stay away from moths and don’t like even seeing them near their homes. Some superstitions are not that dark, so they believe if a moth flies over someone’s head, this person will lose its hair.

In Jamaica moths are considered to be carriers of souls. When a person dies, their soul gets inside a moth and stays on Earth to torture the living. The same mythology repeats itself in the West Indian culture and moth resembles a ghost in the popular culture.

In Hawaii, moths are linked to death. The one they are afraid of is called  the Black Witch moth and people in Hawaii believe that if someone dies, their soul gets inside a moth to say their last goodbye to you. So if you see a moth, this means your loved one came by to say goodbye.

In popular culture, moths are still considered to be linked to the dark side of the world. People often get moth tattoos that carry the symbolism of darkness, intuition, sensitivity and fragile nature.

In the novel Silence of the Lambs, the serial killer Buffalo Bill collects moths and displays them around his house. In the later movie adaptation, the scenes of moths in frames around the house and flying through it, give cills to the viewers by only watching the movie.

Moths are definitely interesting and mystical creatures. Their mystical nature and the fact they enjoy the darkness, makes them even more alluring to people. These nocturnal insects have and will continue to be the most true symbols of the dark side of person’s character.