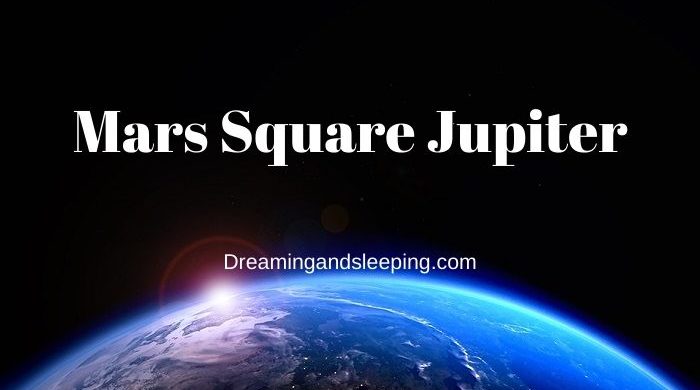 In this square position, we can see the planet Mars connected with Jupiter, and here one is the symbol of the driving energy, breakthrough power, goal orientation, competitive spirit and combativeness and another is the representation of the principle of multiplication and propagation of energy, distance, understanding and the higher realm of the spirit.

The square symbolizes the encounter of symbolic planetary energies at an intersection where neither of the two planets will favor the other, which is an image of conflict or collision.

Here, the energy that is expanding comes into conflicts, but in the same way, it grows after a conflict.

When Mars and Jupiter are in the aspect of the square, force and power of both planets are in some way in conflict with that which goes beyond their power of understanding, which comes from afar and carries with its principles different from what raw power can imagine.

In some way, look at this square as on two planets that see the same thing with the same energy, but from a completely different angle.

Mars tends to move in a straight line and forcefully remove any obstacle that comes in its way, and he does not ask, he takes. In this case, Jupiter, which represents a much larger and stronger force than Mars, found his way and knows a faster and shorter path to the destination than Mars’ upright motion. 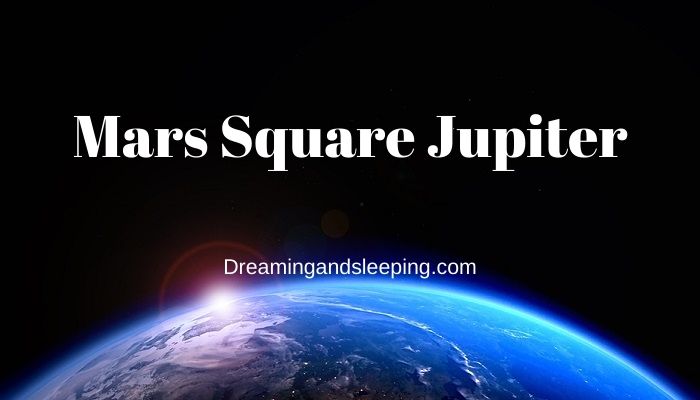 They will see themselves as members of the common people, and will take a hostile attitude towards people from higher social classes, especially those of noble background who are not willing to share what they have with those who are not as fortunate as they are; and what is even better, they can set themselves as a fighters for a human rights.

All this is plausible only if they are able to do it by listening to the law, and by trying to change things in some conventional way, they cannot avoid it or neglect it.

You can imagine from which spot negative attributes come in this square – a planet Mars is the one that is impatient, rushed, always in a hurry. It seems that there is no time to waste and argue with Jupiter about a different and more efficient path than a straight line.

For Mars, there is nothing quicker and more precise than the straight line connecting the start to the goal, but we all know that in reality, that is not the case always.

As much as Jupiter tried to explain to him that the goal could be reached in a different way, and even faster, easier and more efficient, Mars would become tenser and, as a result, anger would build up in him.

You can imagine the character of the people, who build up their inner tension and want to make something work, but they cannot make the right choice, they are in conflict with themselves.

Also, in some cases, and because of the impact of other aspects, these people feel like there no need to rush because Jupiter in the square manages distances and space, so it can be wherever it wants regardless of the circumstances.

Jupiter loves to do everything – make it easy and humble, while Mars has the need to show its strength and consume it  – the biggest conflict, in this case, comes from the fact that these people want to be in a calm and easy relationship, but their inner passion is not allowing things to be like that.

So, in this square, Jupiter will be irritated by Mars’ need to prove and show strength and will try to interfere with it, but in his own way – in reality, this is seen in showing dominate and strength with a current lover.

Instead of limiting Mars’s need to exert power, Jupiter will amplify and magnify this need, and in a love connection, this will be seen as something that could not be controlled.

People with this square in their natal, and especially in synastry analyses, must be so careful, and here instead of narrowing its focus, they will expand it, so it will waste the power of Mars.

In order to work, in order to make a successful love connection, their Mars (energy or passion) needs to be focused on one point to hit the target, and when its focus is scattered over a wide space and at multiple points, it rather distracts and exhausts it. Then these people wander around not knowing what they want in life or love.

One more problem is detected – usually, people who have a square of Mars and Jupiter in their natal horoscope find it difficult to establish trust.

First of all, they do not have enough confidence in themselves and their own strength. Whenever they get a chance, a benefit, and a relief in their life, they do not see it as such because they feel that they cannot reach the goal without investing a lot of effort, which is why they will spend a lot more energy than they need on their action.

So, any love connection that is seemingly easy-going and firm, they are sabotaging, not believing that things could be so perfect, even effortless.

In work relations, this square position could be used in a good way – it is a common fact that the planet Jupiter is the one that sets the law, and Mars is the one that is able to execute them.

In this case, when Mars and Jupiter are squared, they each look at the laws in their own way, and this may be the problem, but if they focus their energy into working for the better of humanity (as they usually do), then they are the ones that easily see injustice.

If attacked by someone or something, Mars in them will face it and fight it – so the best jobs for them are those where they are executors and those who know the law.

Even if it is hard, they will seek justice in its own way, directly and through struggle, but in some cases, these are the people who are quite the opposite, they are in conflict with the law.

They have no faith in justice, feel betrayed, and have the impression that they have to fight for their rights on their own.

This just means that they do not have respect for the law, and are doing everything as they think is ok, and of course, they are not well accepted.

In this case, they do not care if it threatens the rights of others, because they see only their rights threatened.

They will exaggerate the effort and then find it unfair that other people with much less effort achieve the same results.

It seems to them that others have been given the opportunity to do everything easily while being deprived of them. In doing so, they are not aware that they deny themselves the right to be easy and unobtrusive, because they are doing everything their own way – investing excessively.

That is why they are always fighting injustice and pursuing justice in their own way – persistently and stubbornly, but unreasonably.

In this square is the symbolism of a slave-like arrangement where Mars feels like a slave disfigured by a master, Jupiter. Because of this, he is in constant conflict with him, and the two do not like each other.

They can go on the other side of the law and become criminals, in order to combat the law and they will fight most against the law associated with the economy, the movement of big money and capital. All of this does not imply that they will be unsuccessful, on the contrary.

The biggest problem with people who have a Mars and Jupiter square in their natal horoscope is a sense of disempowerment, and it is quite possible that you feel this at the moment when this aspect is active, even if you do not have in your personal chart.

Now, advice for all is that if you want to overcome this and to use the energy of the square in a constructive way, you need to look at the bigger picture.

Mars notices here that Jupiter can do what he cannot and what is an intention of this energy is that we all do the right thing, but there is a cost for everything, and here it can be equally spent power. In this sense, people with this aspect could see this as a major inequality.

All of us should realize that we have the same success and rewards, only if we stop wasting energy by doing our own thing and using sanity. This means that we are not able to look at the bigger picture and understand how we need to act to achieve better and higher results with less power.

Without understanding that there is a different path, some of us will continue to look at things in a straight line and will do its best to rely on itself and its own strength (all comes from the energy of Mars).

In the end, the most important thing for anyone who has this aspect in the horoscope (or for all of us when this aspect is active) is to believe that it is possible to achieve a lot with a little effort and then to start exploring possibilities in that way. Gaining confidence and spreading reason are the most important lessons for these people to overcome the limitations this square imposes on them.

If you are able to do this, you will be in a position to overcome your own feelings of disempowerment and will open up the opportunity to receive all that you may be feeling that you are being denied in your life.

But only when we are able to realize that no one denies us from anything and that our only real obstacle is their distrust and misunderstanding, then all of us could achieve plenty.