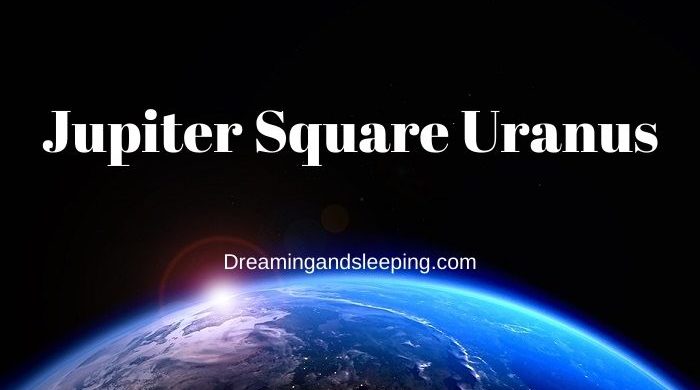 Astrology teaches us that planets that are in a square position they, in some way have a natural inclination to use their basic symbolism to their full potential, so there is something that is positive in this challenging aspect.

In order for the energy of the square to be properly used, the planets must find a different way of manifesting their symbolism.

They need to bring something new into their manifestation in order to refine and enhance their symbolism.

In the case of the square of Jupiter and Uranus, the person who has this aspect in his natal chart has two very interesting planets that give them their energies.

One is the planet of joy and development (Jupiter), and another is the one that is present to give wonderments, and that discloses the customs.

In combination, there is so much to take in the life of all of us, on every level, global and universal. It this sense have in mind that Jupiter is in charge of the processes development and increase, the higher sphere of mind, space and distance. Uranus symbolizes a world of ideas and something completely new.

The square symbolizes an intersection where two symbolisms meet that go in different directions, neither of which will favor the other. It portrays a collision and a clash of energies.

So, a square position is the one that brings possible conflict and tension, and where there is risk and action, but also the way out.

Here, this aspect is even stronger and more pronounced, but at times it can be a bit weaker. 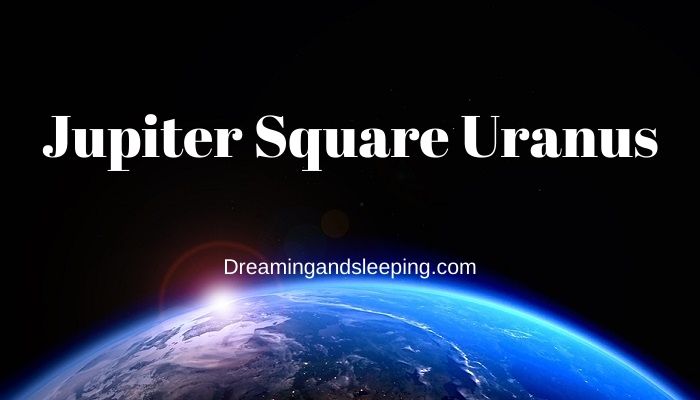 This aspect is the one that is able to help all of us to expand, to bring optimism and expansion; it can bring even greater risk and even greater surprises, there are no rules.

People who are under this impact are those who are intellectually very strong and confident that they do not want to miss the chance of having something more than they have already, and often it comes in an unexpected way.

This leads to a blockage in the process of logical understanding. Jupiter’s basic symbolism is expansion. In this case, Jupiter applies its symbolism by trying to spread a new idea, but as something completely new in the symbolism of Uranus, that idea can hardly be accepted, because its true meaning, application and purpose cannot be understood.

The square symbolizes something that came halfway from the conjunction representing the seed form or the birth of a new energy symbolism, to the opposition representing a visible manifestation or mature form. In this case, Jupiter is delighted with the new idea.

They are able to change things both personally and within the global – the only thing that they have to learn is that no one could predict the outcome in life, but it is the beauty of life. If they are able to make the changes and then there are risks, but also many surprises.

The best thing that they could take from this aspect is that they become believers that joy and happiness could come from an unexpected way.

Those who have enough fortune can slightly be modified and do things of less intensity.

Their lives are usually very interesting, at times tragic, but there is always something that remains behind them – they are remembered as something important, if not on a global scale, but then in their environment, regardless of how small it can be. It is true that they eventually find joy in unforeseen events that bring change.

Often those are the events and changes that we are not initially aware of what they are good for them.

A person who has this aspect in their natal horoscope is delighted with new ideas and all the new things they come across but does not understand it sufficiently to make practical use of any of these new ones in life. She feels the need to be surrounded by many friends but finds it hard to make honest and real friends.

It is also difficult for her to fit into society, as she is bored all the time, so her friendships are instant and short-lived.

Because of the impact of these two planets, people are able to rush ahead of the time, they want to be connected to something new and exciting, but the problem arises when they cannot cope with it all.

The great enthusiasm that they have can be an obstacle for not being able to wait to gain enough understanding to be able to put into practice all that they stand for.

Another problem arises when their life philosophy and attitudes, they are trying to change the world and society and tend to believe in an ideal so blindly, that they are not objective at all.

In some way, these human beings face problems in relations with the society in which they live in and in relations with friends because they are persistently trying to adapt other people to their own view of how the world and society should function, which in most cases is a vision of an ideal and perfect society.

Of course, since nothing in nature is perfect and certain, so their own vision does not fit into the vision of the people they are surrounded by in life.

When in love, these people become needy – they truly desire everything they come into contact, here they want to meet their idea of love, that vision of a new idea or something new in their lives.

The problem arises because Jupiter in the aspect of the square can only half understand the meaning of this new one, and at times these people gave no ability to understand that other person, and eventually that it does not accept and cannot love that person.

The most important thing here comes from the idea of love as the ultimate manifestation of what they have come into contact with. Uranus, in addition to presenting an idea and something completely new, also symbolizes social relations, so this is the planet that here makes some difference, for better or for worse.

Every new love or a potential partner in their minds have a natural tendency to spread and be known, but they want to convey their ideas and have a hard time accepting something new before they fully know what it is about is it a new something that is for them useful or harmful.

In love matters, this could be a major problem – it takes a lot of time before they finally learn more about that potential lover and enter a love connection.

And it is even harder if that other natal chart (of their lover, this is the basis of the synastry) has some problematic aspects, then these two people could never have open and honest communication that is the basis of every healthy relationship.

The most significant potential of this aspect is the ability for people who have it in their chart to have an idea that could advance their knowledge and understanding, and apply it to benefit others.

It could work, even if the people around them are not ready to accept the possibility of such a profound change. As the aspect of a square contains a great deal of potential energy, it is necessary to find a way to direct and use that energy properly, so they have to learn and accept this.

They are usually highly educated, and they rarely believe in anything that goes beyond their power of logical reasoning.

So, they often work in jobs that are exact and concrete, where results are tangible.

The only way people could overcome this aspect that could be seen as challenging is that all of us constructively harness this great energy potential if it focuses on developing and exploring ways to put its ideas and ideals into practice.

People also need to learn how to adapt to the environment so that they can understand them better in return. Only then will we be able to work and develop new models that will contribute to the overall progress of society.

This is the time where you should receive energy that dares you to take the risk and make a thoughtful leap from a rock – change something in your life, and that leap can end very well for you, and it could hurt.

You will recognize what you risk to gain or lose, but all of us should use this time for thinking our faith (in something or someone), though some spiritual dilemmas may be present. It is quite possible that you will feel a sudden rush of desire for freedom and liberation from something or someone.

Both of these planets Uranus love freedom but in different ways, and the square here just puts pressure and is so strong that it’s impossible to ignore it neither globally nor personally.

In the case of the square position of Jupiter and Uranus, such a connection indicates a situation where logic and understanding encounter something completely new that cannot be understood precisely because in a given situation it is different from anything where logic and reason can be effectively applied.

So in this square, we have a picture of a misunderstood talent whose ideas are not accepted by others, but this does not have to mean that that talent will be wasted.