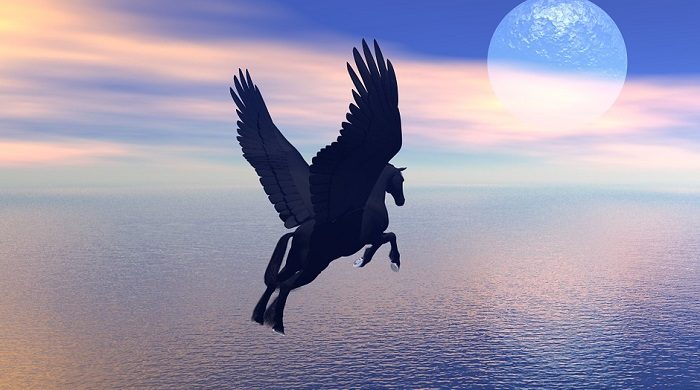 Horse, in some general sense, it the animal, the creature that is associated with numerous positive attributes, and as some like to say, this is the most dignified animal that is beyond compare.

And following this context, it is no wonder why this animal was the part of many legends, myths, etc. There is no place in the world, where this amazing creature finds its position as the most beloved and cherished animal with some “amazing” superpowers.

But, in this piece, we are talking about one of a kind horse, not the ordinary one; we are speaking of Pegasus.

First of all, we must inform you that this is the creature that, according to the Greek legend, was the winged horse and it was often associated with water; he was the son of Poseidon. He had numerous powers, and the water is often connected to him.

In this interpretation are found the merged meanings of both the source and the wings: spiritual creation. In the next few sections, we will explain more in-depth this meaning.

The Meaning of Pegasus

So, as we have said the Pegasus was born in the water/ocean springs; he was a “regular” who had drunk water on the Pierian Spring, and the Bellerophon (he was one of the heroes, according to the Greek mythology) found him on this source, and he stepped with his food and made an impact on Mount Pegasus; he created the source; connected with storms, carrying thunder and lightning instead of the cautious Zeus.

According to tradition, the horse, in some general way, represents the warmth of desire – this is a creature that has warm blood. But, in the mythology when a man shares a body with a horse, then it is a mythical monster, a centaur: he identified himself with animal instincts.

But the horse that has wings is something else, something that comes as opposite of the monster-horse. In this sense, he (Pegasus) is the representation of the creative imagination and its real success, spiritual and sublime qualities (capable of elevating man) beyond the danger of regression.

As far as the name Pegasus goes, we are not sure what to say, since the origin of his name is not yet been clarified. The prevailing opinion is that it means “strong, powerful”, but it is also associated with the Greek word source because Pegasus came into the world at the source of the Ocean. 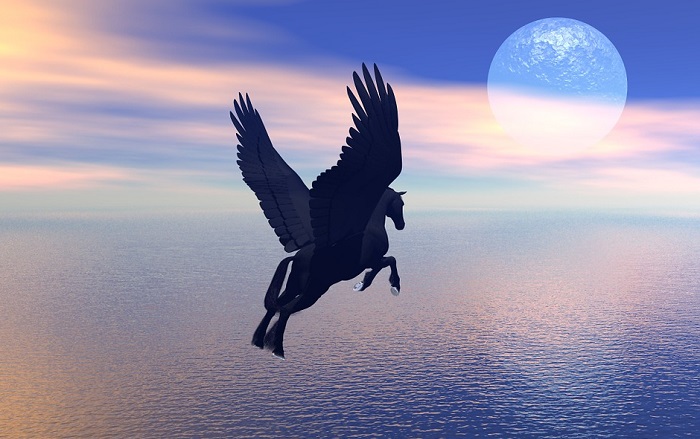 In some other interpretations, the name Pegasus means black and white, but there are no confirmations.

Some say that the Pegasus comes from the East, while others are sure that this is the creature connected to Greece – we must say that this claim has the most proofs since there are some monuments dedicated to this winged Horse.

There are claims that his homeland is most likely in the north of the Peloponnese, more precisely, in Corinth. The monuments representing Pegasus speak in support of this claim.

The mythology of the Pegasus

The origin of the winged horse’s character has not been determined either. It is generally accepted that a winged horse, like other winged mythical creatures (gryphons, sphinxes), originates from the East.

In those traditions, we can find some depictions of a winged horse whose character is most likely the character of Pegasus – this idea was sent from East to West. But, there are more claims that the Pegasus originate from Greece, and that there are numerous monuments dedicated to him.

Winged horse and Pegasus are two motives that are connected, and the most used is the moment when Phoenician merchants started to use it. Some say that the depiction of a winged horse comes most apparently from Assyria, through pre-Asian cultures, in numerous Orientalist variants, through the Phoenicians, and then this being has reached Greece.

The Greek poet Hesiod wrote about the Pegasus, in its book “Genesis of the Gods”, where he spoke about the oldest version of the birth of Pegasus. He was, according to this old book, created by the union of Poseidon and Medusa on a meadow among spring flowers. Poseidon and Medusa in a horse-like fashion are also part of that myth, and she gave birth to him naturally.

In Roman mythology, the poet Publius Nazon Ovid, in his book “Metamorphoses” writes that Poseidon, in bird form, had promised Medusa in the temple of the goddess Athena.

In this version, the Pegasus was born from the Medusas body, and this is the most famous version of his birth. According to this myth, King Polydectes wishing to marry Perseus mother Danae and get rid of Perseus sends this one to bring him Gorgona Medusa’s head.

After the search, Perseus finds Medusa sleeping with her sisters and looking at her reflection in the shield Athena gave him, and she cuts off her head with a curved sword.

There were authors who thought that Medusa was not Pegasus’ mother at all, but that this mother is someone else.

Whatever the “real case” is, in the world of the symbolical language, it is not important, but the idea of the Pegasus is what is relevant.

The Symbolism of Pegasus

A horse, this beautiful and amazing animal could rightfully bear the title of man’s best friend; and this is one “fact” that has not altered since the man has made this animal domesticated. Every human community that has come to know the horse has been amazed at the divinity of this animal, feeling in wonder and humility, even.

Likewise, when humans were able to tame this magnificent animal, they maintained these feelings, adding to the feelings of affection and friendship – there is nothing that this animal connected to small and insignificant, all that he does is grand.

The Horse is the symbol of loyalty and deep friendship – if you look at any story, there is always a man, a hero and his Horse, that follows him around and it is someone who provides him protection.

It is, therefore, no surprise that the horse has occupied one of the most important places in human religion and art since its earliest days. Whatever art piece you look at, you can see a human and somewhere there a Horse, in all of its glory.

So, as you could see and you probably know, the Pegasus is a winged horse that is connected to the source; and the word Source is really relevant to speak of. The symbolic meaning of Pegasus is connected to the water (fertility, miracle, wonder, etc.), which will serve as an axis in the interpretation of myth, a cloud bearing fertile water.

This is truly important to know if you want to understand the symbolism of the Pegasus – the water as the origin of all life on the Earth, and if we want to “translate” that idea we could say the origin of all meaningful ideas that shape our world.

Pegasus, the winged horse, in fact,  appears as a symbol of sublimated imagination, an objectified imagination that elevates man to heightened landscapes – you can be fertile with your ideas, and therefore reach some parts of the Universe, that is otherwise, unreachable.

Pegasus became a symbol of poetic inspiration: in some poems, it is described as the winged horse that is galloping or flying in the realm of fairy tales. It is not a virtuous and useful civilian stable, much less a fighting horse that will raise dust and rattle pathetically in the battle of the company. In one poem, the winged runner’s legs are studded with gold, his reins are pearl strings, and I let them flutter joyfully.

You can see how the Pegasus is inspirational in poetry, and we could not even start with artwork that has the main motive this horse.

The symbolism of the horse is very complex and at some points not very clearly defined, but the fact is that it is present in all cultures and civilizations around the world.

Some see the horse (and the Pegasus is the winged Horse) sees in him an animal associated with funeral rites and such cults, while some others see it as the symbol of the world spirit or of the world of phenomena, and some conclude that the horse represents fierce craving and instincts.

We must say that all of this is true, and in the case of the Pegasus, even more, he elevates all of these traits to another level. But, like everything else, having amazing traits is not enough, and even this power can go into another direction.

So, in this sense, the Pegasus, as the winged horse is the symbol of the power of a warrior, a king, and a powerful man.  Adding wings to a horse makes the symbolism even more complex.

The most famous winged horse in religion and art is Pegasus, the marvelous divine horse of Greek mythology (as it is claimed that he originates from Greece.

To conclude, after all, that we have said, after all, things that we gathered that touch the symbolism and meaning of the Pegasus – this is one archetypal horse, the son of night and secret, is an animal of the world. It emerges from the bowels of the Earth or the depths of the sea and brings death and life because it is associated with fire and water, elements that can be creative but also destructive.

The message to all of us, just like with anything in life – every power that we have could (and sometimes is) be directed in the wrong direction, and used for destruction.