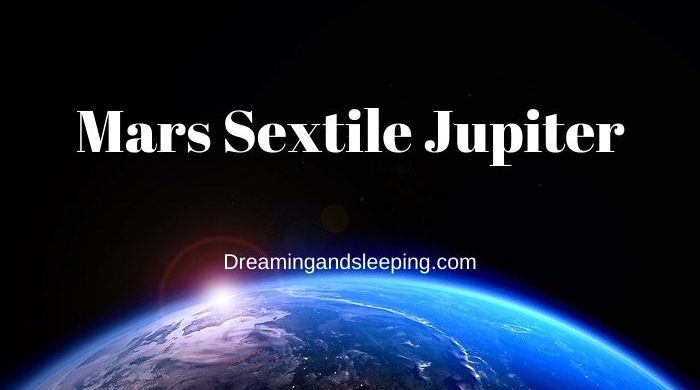 If you have any interest in astrology and your personal natal chart, you know that when you have a well-positioned sextile, you know that you are blessed with some good opportunities in your life.

Of course, it all depends on other aspects, but in the majority of cases, and with a bit of luck, you will be able to reach all of those chances that sextile gives you.

In the case when in the natal chart, Mars has a sextile position with the planet Jupiter, then it comes as an indication of the efficient use of energy in meeting the goals, whatever that may be, and for whatever part of life.

Maybe, in the best way, it could be seen in the work and love matters in life, but their practical nature could be seen everywhere – this is the aspect that should not go to the extreme, or it will bring more negativity than anything else.

These individuals (with a sextile between Mars and Jupiter) feel best when they face problems and overcome all challenges, but this is just part of their personal growth.

If you are among people who have this aspect in their natal charts, you have reason to be happy! Read more about this astrological feature.

In this sextile, two very compatible traits are connected to the planet Jupiter brings optimism, and it is connected with the Mars energy.

These people have a strong defense mechanism that works, they know who they are, and what they want from life, and they are certain that they could have it.

In some way, in the lives of the people who have this sextile, the new fresh philosophy (Jupiter) can strengthen (Mars) power of the inner life, and it can be seen in the outer life. 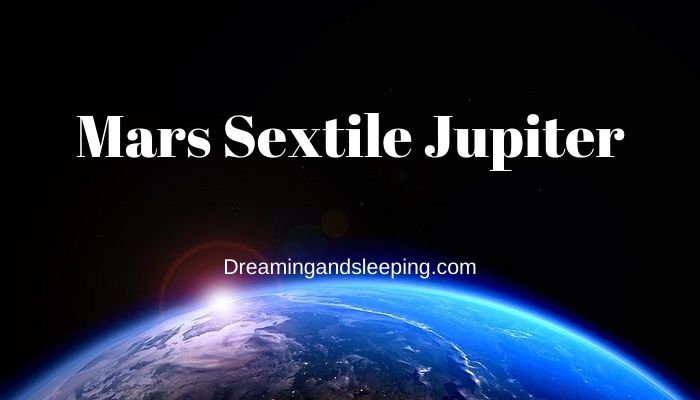 They have enough time to restore confidence in others, and they are quite sure what kind of steps they need to take if they want to reach that chance of success.

They are adorned with enthusiasm, optimism spreading in every aspect of their lives, they are confident that they are able to do whatever it takes to succeed, they like to activate themselves and others that the success is possible and that the goal is closer than it seems.

The feeling that they can drove others to do something great out of their lives is the best reward they can get; and aspect that is also used as an inspiration for the progress in life.

Some astrologers describe this aspect as a ticket for the good fortune that on the long term it can be cashed in, but this is also a transit to strengthen some relationships like emotional, partner, marital. So, those who have this aspect could see themselves as very lucky.

These people can adapt well to any pressure, and their effective communication has been developed here in dramatic situations. With this aspect, they must first develop an intellectual relationship.

Take a look at their personal lives, and professional ones, you will see the amount of the planetary impact and things will be clearer to you.

Mars, as a planet of action and strong energy, connected to the matters of words, thoughts, communication that is above everything very direct and it pushes its impact into the target, there is no middle ground with them.

It is present for the purpose of breaking the threads of established communication patterns, expectations, thought forms that prevail at a given moment.

These people are consequently tied to the child’s spirit, playfulness, willingness to learn and constant search for information. This is their strong side, and they are able to reach it whenever they need to make some goal real and achievable.

But do not forget that here you do not only get to see the planet Jupiter but sextile with the planet Mars that is also included in the whole story.

In this way, you get a sharp spirit, insight, exceptional lucidity, and speed of thought there are no many people who can measure with them in any way.

They do not allow anyone to tell them what to do, their words are cutting like a sword, and the speed at which they come out is simply unnoticed. When these people speak, others listen to what they have to say.

They may not outweigh the facts, but they will certainly be one step ahead of you in information and speed.

These are the people whose rhetorical abilities are ignored by even the most hardcore critics, and often they make a living out of this trait.

All of this, as usual, can lead to its twin, evil brother – Jupiter in sextile with Mars could make people become increasingly aggressive, raising the tone, words getting shorter, not even ruled out to swallow a letter in the heat of the debate.

The tone he speaks is very high, and it is not about what they are saying, but how they say and in what they are transforming themselves, so the opponent is destroyed.

In this way, they are ruthless.

These people can also make the same mistakes again, and they will keep returning to the same stories and starting almost forgotten conflicts, they just are not able to let it go.

There will be a fire in it, which nothing can extinguish – and this is also the fire that burnt them, and they are left with scars that nothing can “delete” later on.

These people are blessed with clear thoughts, cheerful spirit and even more optimistic words that can move mountains. But, don’t expect someone to listen to them for a long time; they can be too much at times.

They will interrupt and give you advice as soon as you take your first breath or break. Of course, they will be convincing, like no one so far! If anything, it will at least make you feel powerful and satisfied.

Love Matters in the case of these people could have a diverse effect – in a negative way, they can be prone to speculation, gossip, acts of evil, even directed to their loved ones.

You can expect the person to deceive you when you are not hoping, or everything will be a big misunderstanding from which both sides will emerge damaged.

This is in the bad aspects that bring high-speed activity, fraud, deception – but this is just one side of the story.

They can fall in love with those who love their speed, noise, and those who are able to endure what they are saying without any judgment, because they are very, very direct and persuasive.

There is no doubt that there is so much love that they could have to give, and if you want someone to lead you in life, they are the right choice.

But you need to know that they have poor self-control when it comes to exchanging opinions, lack of nerves to explain attitudes, which leads to conflict between lovers.

Some representatives of this aspect (if it is connected to some other aspect that enhances negativity in it) can lead their lovers into the heated debate and even persuade on physical assault.

Of course, this is just one version of their love life, but if the aspects are more positive, then there is no question that they will give only the best out of them.

They are very cuddly in emotional relationships, and the partner must learn how to deal with their fast thoughts and words. They like lovers who will primarily find a good speaker and thinker who won’t bother them.

You can conquer them with words, sudden calls when they are not expecting you. They will be retained by your sense of humor and love of movement.

The good sextile position between Mars and Jupiter has reflected in the people who are very skilled in information technology, and you will very often find them as engineers in large information systems.

The position of dispatcher, call center worker is also common because they like to talk so much, and they are very persuasive. They can sell you anything they want.

Ability to sell is very important here, so often, people with this aspect can easily enter any space or even go unnoticed to do any harm.

They are often involved in sport, but because of the strong energy, they can be prone to injuries.

They love to be in speed, traffic, and above all they love to travel, even when accidents are possible – above all they are very wise people, agile, quick, and ready to break the established communication patterns.

This is the aspect that gives speed and intellect all rolled into one – these people do everything “off their feet” because time is the most expensive resource, and they are aware of it.

They are often very slender and love to experiment with their look. But they have a practical nature, and if something is not as they have imagined being, they will cut it off from their lives.

Whatever they do, it must be very easy to maintain. They will proceed decisively and easily to replace the interlocutor if they do not wish.

They are very interesting interlocutors, eternally hectic, an irresistible smile. Moods change often, and if you stop them, they will destroy you.

In any case, this sextile is intense, maybe much more than some others, because both planets in question bring their own “energy” that is very strong and powerful; if used properly, it can bring people who have such position into the most beautiful places in the world. If not, they could be those who have ruined every opportunity to grow in life and can draw others to fail.

If you find out that in the current moment, this sextile is in its position in the sky, know that whatever you say at that moment, it has a chance to become a reality.