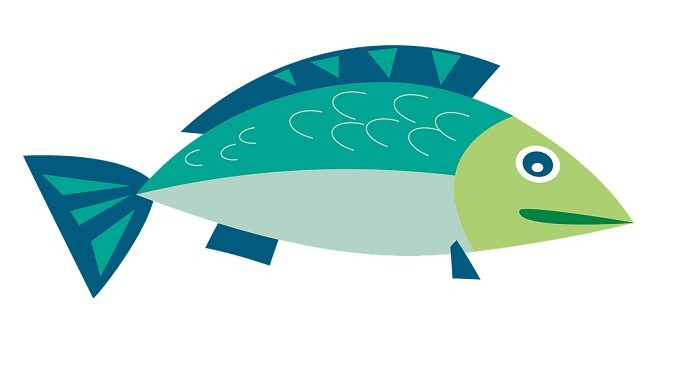 Even if you do not look at this object in this way, but we assure you that the Fish is one of the interesting symbols that we have, often used, both in religion and for numerous cults, rituals and ceremonies.

In the majority of cases, this is the symbol as the simple representation of a fish consisting of two curved lines was used, and circular symbols were found, which were assumed to include the Greek letters.

We must say that the symbolism of Fish is diverse, but in most cases, it comes down to fertility as a heavenly blessing and giving of life.

Many claims that this motive, when appears in the dreams, or in any form of prophetic action, has an interesting meaning. This meaning or meanings vary from the symbol of faith to the symbol of fertility.

History of the Fish symbol

A circular symbol that includes the Greek letter ichthys was primarily found in Ephesus in present-day Turkey. It is not historically proven that Fish was first used by Christians as a mark of recognition (the recognition of faith), that is, like a secret password – believers are known for this sign.

Long before the advent of Christianity, Fish already had its deeply represented mystical meaning in most Mediterranean and other cults, so the Fish found its place in numerous cults and spiritual teachings.

In this context, we meet this symbol in the cults of Isis, Hathor, Venus, Atargatis, and the Great Mother in Ephesus, who carries a low fish around her genitals, while her neck is low with the symbols of the Zodiac.

But let us go back to the past; we could see that the Fish motif appears in the 2nd century in graffiti in the catacombs of St. Callistus in Rome and later on mosaics of Christian churches.

This Tertullian comparison is based on gospel accounts in which Jesus feeds 5,000 people bread and Fish in the Gospels of Mark, Matthew, Luke, and John, or the call of Jesus to the apostle Peter and his brother Andrew , when he tells them that he will make them “fishermen of men” in the Gospel of Mark.

Similar early Christian signs included the monogram of Christ and the anchor sign.

Fish is an integral part of Mediterranean life and religion and has become a disguised sign for the persecuted Christians to express their faith. Fish is also frequently mentioned in the New Testament.

Fish is also symbolically associated with the celebration of the Sacrament in early Christianity. Jesus’ multiplication of bread and Fish is interpreted as the image of the multiplication of Eucharistic bread in Mass. Fish was a common symbol in the Christian catacombs, which is still used by many Christians today.

As you could see, the Fish is most commonly associated with the Christian faith.

The Meaning of Fish

The symbol of Fish often appears through history, and whenever you look, this is one symbol that carries power, and this is no wonder since it connected to the life itself, or the origin of life.

In Mesopotamia, for example, we encounter Fish with the Philistine deity Dagon whose cult is also mentioned in the Bible. This is transected into the Old Jewish Passover fell on the month of Adar (Adar-fish) as Christian Jews taught that Fish was the food of the blessed in paradise as well as a symbol of the heavenly feast in the life to come.

This way of looking at the Fish remains till this day since even if fasting, the Fish is one of the foods that are allowed.

In Hinduism, Fish is encountered in the cults of Vishnu, the savior in his first incarnation and the creator of a new race, and Varuna, the golden Fish. Like the Mediterranean mysterious cults, the Fish here also symbolize wealth and fertility as is the attribute of divine love – this is something that will be seen in later descriptions of the Fish.

In Greek mythology, the Fish takes one very important place; and the word “Delphos” had a dual meaning – oracle and Fish. This is something that is a well-known fact – In Delphi; therefore, the original Fish goddess was first celebrated. The later Fish goddess Aphrodite was celebrated by her followers on a holy day, Friday, when they ate Fish.

In this context, we must speak of one epitaph that is connected to the Fish divinity – and it goes something like this – “Oh, the divine lineage of the Heavenly Fish, keep your heart intact, receiving the immortal well of mortals from divine waters”.

This only shows that there is an entirely different dimension of the symbolism of Fish, its connection with the Zodiac, within which a single sign, the sign of a Fish, fits.

But even if we want to speak of the Zodiac sign Fish, we must say that this is the sign that is connected to the mystical, to the ability to know the future, by the intuition and deep inner wisdom.

To add one more information – the roots for the Zodiac sign Fish date way back to the old Egypt, in the pyramids in Dendera, on which the astrological sign Pisces is shown with the symbol of the two Fish.

Even if this symbol was somewhat neglected over time, the great comeback was in Christianity, where the Fish is one of the most important symbols, besides the Cross, and it was referred as “the Fish of Heaven.”

The Prophetic Meaning of Fish

Now we have come to an integral part of this story, and we want to know what is the Prophetic Meaning of Fish when it appears in, for example, a dream, or a vision, etc. In any shape or form, where it has some message to tell you.

First of all, the most common association to the Fish in the water, since it is its natural habitat, and the fish cannot live out of the water due to the fact that it lives in the water which is itself a giver of life.

But on the other side of this story, this is also one of the most common symbols that are associated with life, as it is, but also with fear and instability.

Some say that the Fish is connected to the males, it is a male symbol – in the Osiris cult, Fish is a purely fertilizing symbol, and not much more.

Now, we have come to one of the interesting parts of the symbolism of the Fish – it is always connected to fertility and wealth.

It speaks not just about the biological reproduction, but about the creativity as the ideas can be fertile also, and the ideas are those that can take us somewhere in life.

One alternate prophetic dimension of the Fish is the symbol of the increase, and this is the aspect that can be seen in the improvement in property, or wealth – not only in a material world but also ion some physical.

But the Fish can be the announcement of a change in love area of life when such a symbol appears it is a hint of an unexpected fateful encounter with the person of your dreams.

And if we want to dig deeper, love is life, and all of these could be associations to the Fish. In the end, the Fish could be seen as the symbol of spiritual expansion, abundance, etc.

Even today, the Fish symbol is very popular, maybe due to the popularity of the Zodiac, where the Pisces Zodiac signs in 12th sign that is often connected to the mystical powers, strength, and intuition.

But, the Fish remain that integral part of Christianity, as we can see the Cross on the Fish, and this is a known sign of the Christian faith. Today called the “fish of the Jesus” was first used as a Christian sign in the second century. The Greek word “ichthys” means Fish. But not only that.

The real reason is that the Greek letters ichthys taken as an acronym, therefore, as the initials of the Greek words, mean – “Jesus Christ the Son of God the Savior”.

May this be as it is, we will remind you that the first association with the Fish symbol is the water, and we all know that this is the water is the “mother” of all life, so the Fish is the symbol of life, and in derived meaning, the symbol of fertility. Not only the physical fertility but the creativity that comes from the inside, as it is the representation of ideas, and creativity.

It can be connected to the purpose in life that every one of us should find – but not just that. The life purpose should be directed to the virtues and should be based on faith.

Some say that when the Fish appears, you will hear the good news that is connected to the love area of life, or wealth in life.

Everything you have or you lack will become a reality, it will increase in many ways, and you will feel like a wealthy human being. And even if this symbol can be connected to the material wealth (money, of course), but more importantly, it is the symbol of spiritual wealth and expansion.

And in the end, let us not forget the religious, spiritual meaning of the Fish, as it is the true symbol of faith. This can be applied for people regardless of their beliefs, and it is enough to know that there is something more in our mortal life, something that is beyond.