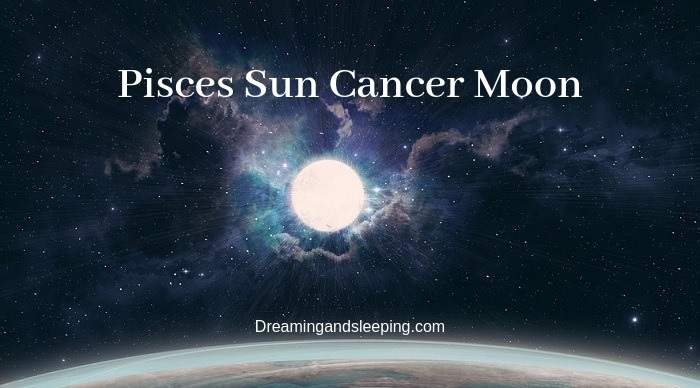 Knowing the luminary positions (the locations of the Sun and Moon in your personal horoscope) means that a person through natal chart will be able to receive a strong clue how to behave in his life and how to make the best out of his life.

This is amazing to know that you have the chance to learn how to behave and how to avoid some mistakes in life; even more, a person who has this chance in life will be able to receive a piece of advice how to handle in the future with difficult things.

It can even show a person what can be his focus in his life in some time that will come in some distant or close future.

So, today we will dedicate these rows to the people who have located luminaries in Pieces and Cancer signs. This may be one very interesting combination cause these to signs are similar in some way, or they are dealing with the same thing (emotions for example) in a different way?

This is the nature that can show an immense resistance in life, which compensates for its passivity maybe or emotionality that he cannot deals with.

So often he succeeds in creating himself an existence that suits his taste and needs, and these needs and desires are very interesting and have their sense and purpose in life. But the true strength of this combination of the luminaries is his engine that keeps and feeds his reality -and we are talking about the world of emotion.

They (sentiments) can move the mountains with their strength and potency, he can become thoughtless and exclusive, but all the time he will be deeply connected to his spiritual side in life that will be his guide.

Even more, we must say that the person who has Sun and Moon in Pisces and Cancer sign has the authority that is always outlined with some care for others – he possesses great intuition in evaluating people and often turns to others’ desires and needs. He is able to give them what they need, and even things that they do not know they need.

As a friend, lover or even boss, this person is fantastic to have in life, and he belongs to those people who are worth keeping for a lifetime.

This is the person whose fear of ridicule or criticism sometimes makes him discreet, diplomatic and conventional, and he resolves this in a way that is so passive. For his innate insecurity, he withdraws from all unpleasant things that may come in his way – even if in advance he thinks that something will be harmful or uncomfortable for him, he will stop it right away.

He is gracious and charming in behavior, but whenever he is hurt by some kind of embarrassment, he tends to get into his shell (the Moon in Cancer sign).

Because of the pronounced sensitivity, this human being is susceptible to the influence of the environment and endeavors to see life through others – better be safe than sorry.

After people first encounter him, they are often impressed by his deep feelings and fragile security, and they truly fall in love when they see his rich imagination.

The main thing is that this person needs to take care of his fragile moods; he may find everything that happens to him it all too personal. He must avoid making his desires a reality, having an illusion of others, cause these are the moments when he will make some terrible mistakes in his life.

He must beware of heavy emotions and take into account potential preference for negativity and depression.

The person who has Sun and Moon in Pisces and Cancer sign is the one that can hardly resist temptations, especially temptation to escape reality by entering a love affair. His emotional world is often inhabited by unreal illusions, and he makes many mistakes in this way, because love has to have at least some connection to reality.

Feelings are vague and controversial in his life, at the time, which makes him unable to make tough decisions – like the moment when must end one relationship that is negative for him.

When, after many experiences, he feels that his personality (and freedom) is endangered, he is the one that tends to retreat into his shell all for the purpose of questioning the traces that the world he has left, to retreat to a hidden place to think about the purpose of life and about his future in love.

Even more, when in love, this human being finds very easy to forgive, he lets his lover see that he changes the mood every 5 minutes, it is sometimes difficult to understand him at those stages, but this person has the biggest emotions that survive every pain that may come, and he loves very deeply and very strongly.

This person with the luminaries located in Pisces and Cancer signs cannot always silence his feelings and preserve his head for cold analysis, and this is the aspect that is mandatory when in love with someone. His thoughts are fleeting dreams and sometimes calm down in creativity, so it can be hard to be with him in a loving relationship.

Also, his lovers must understand that he has the great need to be lonely and to feel peace intimacy does not push her to socialize with others as she needs to get his full bloom.

However, although he may seem as gentle, he should never be underestimated because he is extremely strong when he feels that he needs to protect something that he loves. He is able to give full support to others when they want to help – you can just imagine how supportive he is toward people he loves.

He will be their caretaker, their support and everything in between, and he will be proud of his role in those relations; this is not the person who will hide his role in love.

We know that the person who has such luminary position is the one that is much quieter, shy and more sensitive than the typical Pisces, and he above all prefers the home and family environment, so he needs a lover who will help him have all of that.

With him, there can be true enjoyment, in a sense that he is full of imagination and he even finds that the tradition is essential – so you have a lover who can create dream-like reality and at the same time cherish some principles, like loyalty.

Emotions are very strong, and he enjoys romantic and unusual events and adventures. In him, there is imagination, fantasy, certain creativity, and taste for nice things.

The perfect lover who will appreciate all of this is born in the Zodiac sign Capricorn, and in the next rows, you will see why.

In the case of such a combination in love, there can be a strong mutual inspiration and great support, where both lovers would enjoy their time spent together.

The Capricorn lover is very much grounded, and he supports our candidate in life and helps him to ease in the real world and properly direct their emotions, so this combination, according to astrological interpretation, is very good and beneficial to both partners.

It can last really long and be an example of how to people can be amazingly in love, respect each other and love passionately.

The person who has Sun and Moon located in Pisces and Cancer signs is a very pleasant, very tolerant friend who has of fruitful ideas that attract people easily from his surroundings.

Above all this is the person who is very loyal to the people he loves, with whom he has a correct relationship.

What he needs in any interpersonal relations is the constant exchange of thought, and his idea of the tomorrow has to be complete. He often works more than he was asked for it, he likes to help but is very prone to proving himself among friends, and sometimes he can do it in very wrong ways.

Sometimes his friends will say that he is so boring because he lectures them constantly in life, but he has a good intention there is no doubt about it.

This person adores socializing, and loneliness scares him, but in some other way, this person likes to be alone remembering at least one difficult, complicated, impossible emotional story that leaves a great mark on his psyche.

This combination of the luminaries is characterized by the simultaneous presence of two similar but still very different worlds: here we encounter the static passivity that comes from the Sun that is located in the Pisces sign, and from some other point we can see the clear tendencies that are dealing with the unreal Cancer (the Moons position).

If you want to meet this person (but to really meet, like in depth), you must enter his dreams and so it is necessary to understand his sensitivity and deep-rooted spiritual tendencies. These two things define him, so it is important to understand them good.

Excessive sensitivity exposes this human being to all possible external influences that make him – in a way, a filter for personalities and the circumstances of their time.