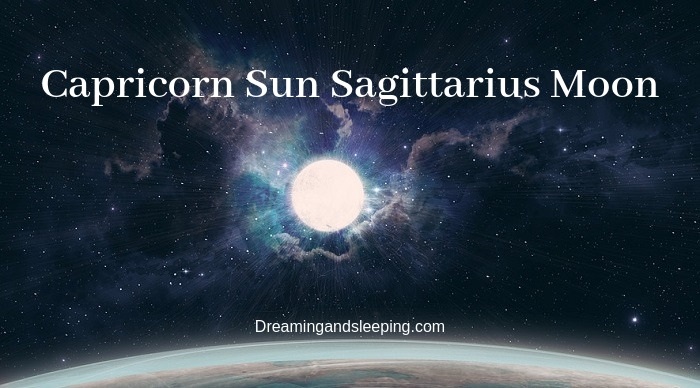 For example, if you read in some daily horoscope in the newspaper, or online article that the certain sign belongs to the fixed signs, like for example, Taurus, or Aquarius that means that a person who belongs to these signs is related to values and the ideal, as well as to structuring and organizing through a persistent, stubborn attitude.

They do not behave weakly or overly emotional, and in some simple sense, we could say that they are lead more by the reason (mind, idea, and ratio) than the emotions.

This is just one of the divisions that we found in Astrology – but you can see that all aspects that appear in it have a certain effect, and all of them make a specific natal chart. One, by one, they create a picture, just like colors create a painting.

The Luminaries represent the meaningful impact on people, and today we are looking into the life of the person who has Sun and Moon located in Capricorn and Sagittarius sign. Are these two signs so different that a person who has them in the natal chart cannot deal with some issues in his life, or is this combination very productive? Read all about it.

Common sense dominates this nature, and it is indeed the great power that this person gladly exposes to other people, but also to himself, knowingly managing passions and ambitions.

And his ambitions are high, and talents versatile, and what he lacks in talent he can make up with hard work and dedication – everywhere you turn you will see a fight for what he believes that he deserves.

His openness to the outside world, the ability to discover the deepest meaning of the soul of others and of all things around itself, making it extremely human and true philosopher, with a high sense of duty.

This is not the person, who is inclined to dreams or nonchalance in behavior, and we should best describe this human as the brave fighter who usually realises his ambitions, and those ambitions that are not realised, he never forgets, but he slowly built them and waits for the right opportunity.

He sees his life path more as a roadway to be crossed than as a series of moments that he needs to live in as intensely as possible – he is more dedicated to the general goal, than to the path itself and the experiences that come with. Thus he builds his present as a function of the future he is yet to create, whether it is a career or his development as an individual.

But there are some downsides to the person who has Sun and Moon located in Capricorn and Sagittarius combination – he is not as positive as we could conclude if we look at some of his traits.

He can experience some sort of depression and pain if things are not going in the desired direction, and this is such a typical trait connected to the person who has Sun in Capricorn.

In those times he blames himself and tortures himself with many thoughts; for example, how could he let such thing to happened, or what did he do to deserve it, etc. It is a good thing that he takes responsibility for his actions, but he should not punish himself for failures.

Now, the major problem with this person – the most problematic aspect is when he feels disobedience and disrespect from people who are close to him. Then he feels like he cannot achieve anything, but he still wants it, and to do those moral boundaries disappear; he will do everything just to succeed, even gamble with his feelings.

Sometimes even, when the Moon in Sagittarius shows his face, he is ready to lose all just for the sake of possibly winning the big prize (whatever that may be for him). Of course, he does not get it, and he is the big loser who gambled all away.

A person who has this luminary position is extremely sympathetic to other people, he is not so close as some others Capricorns, and he belongs to people who know how to find the solution at the last moment – here we are talking about the process of seduction here, and it is the game he, even if he does not want to admit, likes.

He is the one that likes to conquer, especially in love -he has a passionate heart, even if he cannot show it in the way he would like to. Or maybe the word passionate cannot be used here in some regular way, we should better say that this human being has a big heart, and will never mind, for example, if he loves his partner more than his does love him.

When the Moon in Sagittarius is active, he lives with his all heart open – he is ready to feel the love, from whoever will give it to him.

But the Sun in the Capricorn knows how to cope with too much passion, and he may struggle with this, but in the end, everything will set on its place, because the Moon in Sagittarius can wake up and give the necessary optimism and belief that true love will come.

Don’t be confused with his character, this is a person, despite all things, who is emotionally responsive to more energetic and more hyperactive lovers, those who are equally inspiring and in the eternal quest for something new (do not be confused, he has this need, but he sometimes suppresses it).

Some Astrologers say that this is the person who is made from the mixture of passion, but the energy of a new beginning, along with the fear from it.

He possesses this personal optimism that preys, although he is prone to strict but realistic living philosophy, and subsequently he needs lovers who will follow this philosophy. This is very meaningful to know when it comes to this lover, and he must be (or he works the best) with those who are similar to him, or who can follow his lead in the major aspects in life.

He has the need to be respected and appreciated when in a relationship, and even if he can act casually, and when in his youth he is more inclined to learn something new and meet new people (in later years of his life he becomes more closed and not so open to new loves and passions).

So, what we know right up till this moment about the person who has Sun and Moon located in Capricorn and Sagittarius is much more sociable and more humorous than other Capricorns, thanks to the Moons location in Sagittarius.

He maintains his relationships seems like a detailed, elaborate action plan, firmly keeping your way and not allowing himself to be affected with the negativity. However, you will also be completely discouraged if you do not meet your deeply rooted need for security.

The perfect lover for this human being is the representative of the Zodiac sign Gemini – communicative, loving and independent characters, a breath of fresh air for our candidate.

This is one passionate pair that deals with each other greatly since they make a very communicative pair, which can be said to be on the same spiritual/ emotional length.

This combination almost guarantees the success and longevity of a love relationship; however, occasional conflicts and mistrust can occur due to other non-harmonious aspects.

But we believe that these two can overcome everything and top rise up above all negative aspects.

This is the person who defines his choices according to the criteria of his time and rarely happens to re-examine socially recognised values.

However, this human often expresses the desire to perfect those criteria in order to improve its and others’ fate.

This is the individual who is motivated by an ambition to contribute actively to collective life – he is not selfish, regardless of his personal success he wants to be that helping friend who will make his people better.

In that life, he lives and expects others to follow the same pattern – an ideal that is always remaining solid, capable of facing the world around him and overcoming the greatest difficulties in life and tirelessly working on his inner development.

He may surprise his friends when he who is usually serious and involved in many projects, accepts or suggest something funny or wild; of course he always expects that others accept his suggestions.

This is the person who has an awareness of his own value that encourages this nature to hard and persistent work, in the end, to gain the support and recognition of other people. If possible to inspire them and to become their leader, but the good thing is that he has a big and unselfish heart, and he truly wants to be a service to people.

The deep humanistic feeling and the absolute respect of oneself and neighbors make this person extremely sensible in every respect.

In the end, we must say that his highest quality is, first and foremost, is the elasticity of the mind, which never allows it to absorb purely material or intellectual, spiritual or sensual interests, but can, from these elements, form a mixture that understands and respects everything.