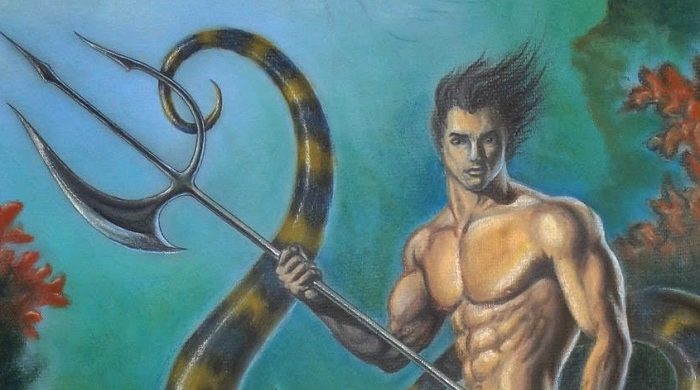 Greek mythology is well-known all around the world. This mythology consists of many different stories about heroes and gods, about their lives and their rituals. The myths describe the gods and their powers and they usually contain a lot of fiction elements.

However, most stories that can be found in Greek mythology are considered to be true. There is no doubt that Greek mythology was very important for the development of the Greek literature and arts. Many poets have written about ancient Greece and Greek gods, their powers and symbolism.

There is a large number of Greek gods in ancient Greece, but only the main gods are today recognized and people have heard about them.

In this article we will talk about the Greek god who was the messenger of the sea. If you are interested in Greek mythology, then you have probably heard of this god. His name was Triton and he was considered as one of the most powerful Greek gods.

You may associate this name with a famous Disney character Triton in The Little Mermaid.  In this Disney film Triton is presented as the king of the Atlantic ocean.

Even though this film is based on a fairy tale, the basis of this film can be found in Greek mythology. There was really the god Triton, who was the king of the sea and oceans.

Now you will see something more about this god, his symbolism and also his importance in Greek mythology. We will tell you who were the parents of this god and also who was his child. You will see how did Triton look like and why he was considered to be so powerful.

The Origin of the God Triton

There is no doubt that Triton was one of the most important names in Greek mythology. As we have already said, Triton was the messenger of the sea. Actually, the myths say that Triton was a messanger of his father.

His parents were also gods of the sea and their names were Poseidon and Amphitrite. 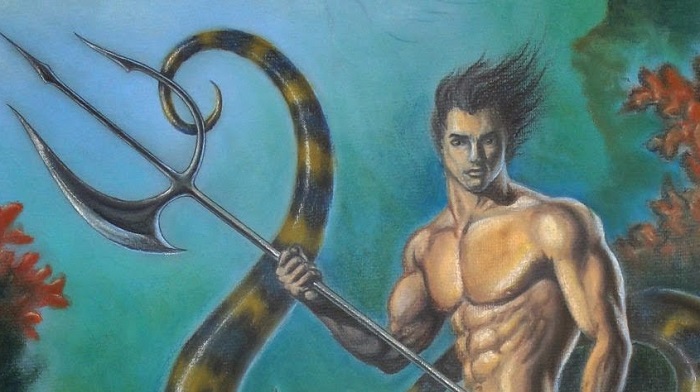 Poseidon is well known as the Greek god of the sea and water in general. Also, Poseidon was a younger brother of the Greek god Zeus, which made him even more powerful. If you have learned about Greek mythology, then you have certainly heard of the Olympian pantheon. It was consisted of 12 gods and one of them was Poseidon. His power and his importance in Greek mythology is very high.

It is also important to mention that Triton had a brother and sister. His brother was Rhodes and his sister was Benthesicymen. Actually, Rhodes, Benthesicymen and Triton were the children of Poseidon and Amphitrite, but it is also believed that Poseidon had many other children with mortals and also with other goddesses. The myth says that Triton had approxiamtely 50 half-siblings.

He was in the color of the sea and there were sea shells on his shoulders. Sometimes he was described as a bearded god, but sometimes he was presented as very youthful.

Triton and His Trident

If you are interested in Greek mythology, then you have probably read about Poseidon and his weapon called the trident. It is also very important to mention that Triton had a trident, just like his father.

He used the trident to produce a specific sound of a trumpet, which helped him raise or calm the waves on the sea. The sound that Triton produced using his trident was very powerful, so it could cause different things to change in his environment. It is even believed that the sound of the Triton’s trident could cause the giants to fly. Sometimes this strong sound could terrify even the wild beasts.

There was no creature that was not afraid of this sound. Triton ruled the sea using his trident and producing this unbelievable strong sound. We know that Triton was the god of the sea, but you may be wondering where actually Triton lived. Just continue reading and you will find out.

Where did Triton Live?

There was a popular Hesiod’s Theogony which said that Triton lived in a big palace in the sea. This palace was made of gold and his parents lived also there.

Homer has also written about this god and he said that Triton lived in the sea of Aegae. That myth was considered to be the original myth, but later there were different stories about these gods.

It is important to mention Argonauts, who claimed that Triton lived on the Lybia coast.

Actually, he described Triton as the god of the large lake in Lybia called Tritonis. There were also many other myths about the place where Triton lived, but it was known that it was the golden palace on the sea bottom.

Later there were also writers who described Triton as the god who was riding on horses over the sea. It was also said that Triton was riding many sea monsters.

The Children of Triton

The mythology also said that Triton had the son. His son was named Pallas, but we have also to mention the goddess Athena, who was the foster daughter of Triton. Athena was the Greek goddess of war and wisdom. It is also believed that the goddess Athena killed her foster brother Pallas, but it was accidently. The myth said that it was during a sparring match.

There were also myths about the Tritons in plural, but more about these creatures you will see below.

Who were the Tritons?

As we have already mentioned, there is also another interesting thing related to the god Triton and the Greek mythology in general. Over the time Triton became more and more powerful, so there was created the whole race of creatures and they were called the tritons.

These beings were actually mermaids and they very used to follow the sea gods when they were going somewhere. The tritons was usually considered as spirits or daimones of the sea and there were also many myths about them. It is interesting to say that these creatures had the hair of a green color and their hair was very matted, which means that they could not separate the hairs on their heads.

Now we will say how the tritons looked like. Actually, they had a very wide mouths and sharp teeths. Their teeths were like the teeths of a beast. The eyes of the tritons were in the color of the sea and their fingernails were very sharp.

As we have already said, they were actually mermaids, which means that they had the upper part of the body as humans and also long tails that were similar to a dolphin’s tail. There is no doubt that Triton was the main cause of the appearance of these creatures that were very similar to him. It is believed that Triton was the leader of approximately 3000 tritons and 3000 mermaids.

Mermaids were female creatures while tritons were male beings. Both of them were sea nymphs and they had supernatural powers. They were half human and they had a tail like a fish. There are many myths and legends about mermaids and tritons. It was believed that they had lovely voices and they could help men and calm the storm. Also, it was said that mermaids were really charming, so they could seduce men with their beauty.

However, it was not good that a mermaid seduces a human, because it could result in his death. The myth also says that mermaids raised the goddess of love, Aphrodite.

As you could see, Triton was the god of the sea and he was Poseidon’s son. It is important to say that there are many poetic stories about Triton and his powers. Triton was mentioned in Homer’s Odyssey as well as in Theogony which was written by Hesiod. Also, Apollonius has written about Triton in his poetic story called Argonautica.

There is no doubt that Greek mythology has a very important modern influence as well. For example, in Rome there is a famous Fontana del Tritone, which was built by Bernini. In this beautiful fountain you can see the sculpture of Triton surrounded by dolphins.

Also, you have probably watched The Little Mermaid which was written by Hans Christian Andersen.

There are also many other sculptures, pictures and real masterpieces related to Triton, who was the messenger of the sea and one of the most important gods in Greek mythology. There is also the Mermaid Parade every year in New York and many other events all around the world that are related to ancient Greece and Greek divinities.