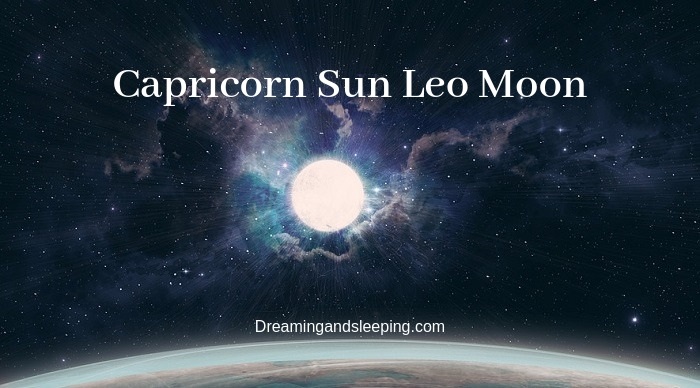 As we have previously said, Zodiac elements describe people in some general way – so, for example, a person who belongs to the element water – they are an emotional element, they hate to have boundaries even if that could seem irrational to others.

Other elements also give some other influence to the people who are under their charge, but of course, as we have said, this is something that is a general level, not an individual.

But what is common for all of us is that we all have located Sun and Moon in a certain sign, so in this case we are dealing with people who have them located in Capricorn and Leo signs, and we can see that this is the person who has strong, but difficult character, and underneath the surface there is much more that is hiding.

The primary weapon that this person has in the process of gaining his goals is his great ambition, strong will and perseverance, along with the ability to set itself realistic and achievable goals.

This is really important in terms of success that he wants to achieve in life; dreaming too big dreams is not good. The best advice for this person is to go one step at the time, and slowly develops his goals, and if he “work” this way, then he may dream big.

He also has pronounced organisational qualities and readiness always to sacrifice oneself if need be.

Here the ambition, energy, and fighting attitude glow concentrate to achieve maximum power but are rarely released in a powerful explosion – he suppresses himself in some way, but maybe this is a good thing.

He is cordial in dealing with people, in the true sense of the Moons location in Leo sign, is cooled by restraint, seriousness, patience, and a desire for material and emotional security. A perfect combination some will say.

He is the one that is very ambitious, setting high goals and working boldly and persistently on his accomplishment. He is very capable of reaching them or getting close to them, just as he does not let the case lead you, but he is developing an extraordinary strategy. Since he is a fanatical and perfectionist, this means that he does not slow down the execution of the work that has started. He goes until he is happy with the results.

Nevertheless, this person does not easily succeed in reconciling his love for hardness and his confirmed desire to come out from the shadows.

In the end, we must acknowledge that this person has the personality of success, who is happy to show that the positions achieved are the fruits of his personal engagement.

The main disadvantage that can be attributed to the person who has Sun and Moon located in Capricorn and Leo sign is narcissism.

In him, we can also notice a lack of completion and truth in relationships with things and beings. He starts something and often times he does not finish it, although we must admit that he always strives toward success, there is no doubt about, but the ways he reaches can be disputable.

This is the person who can also easily fall into a crisis and become irritable – he is aware of this fact, but still, he does not stop doing it, no matter what. Or even worse, he became ignorant of his behavior, making the situation even worse. Fortunately, he is aware of his faults and knows how to expose his skills and discretion himself when needed.

Because he is hungry for power and he sees and tries to rise on the social agenda, even by means that are not very sophisticated – this is very problematic in all areas of life, and even in the realm of human communication.

The person who has Sun and Moon located in Capricorn and Leo signs directs his energy in favor of progressive and stubborn action, and egocentrism usually ends with egoism.

The same scenario is present when his love life is in question – he can achieve anything he wants and have anyone he wants, but he also can focus more on himself than on others.

The problems with this person in love are that his concern for efficiency usually overcomes love emotions, which are better expressed in passion than in love. This happens because passion is something that he cannot control and that does not last so long, but love should be maintained, and even if he wants to have it his life, it takes times until he let himself in this sense.

This strong passion can also favorably affect his engagement in the realisation of far-reaching endeavors, and to influence subordination consciously to self-discipline.

So he uses passions to achieve desired goals in work for example, but as far as his love life comes, he can show them in the manner that he is the most important and the partner comes in the second place. But, this is not the permanent situation; it is more about the phases in his life that change from time to time.

This is the extremely emotional person, but you cannot notice it at first glance and in the first encounter, because the one that has Sun and Moon in Capricorn and Leo signs has strong dignity and does not want to share it intimately at the beginning of a relationship.

What is certain is that others cannot notice this person because he possesses extraordinary strength, endurance, but a comfortable but secretive protective attitude toward himself and his closest.

Nevertheless, at the emotional level, he can build himself to be very optimistic, and also the one that strives for freedom strives to be loved and loves without prejudice.

When he feels that he is loved and is in a good relationship, he can be prone to spontaneous, unplanned strong and long emotions – then all things that the Moon in Leo hides come to the surface in some way.

He is not maybe a lover of a classic type of marriage, but he can find himself somewhere in the middle, but he does not lose his identity that matters to him.

As far as his choice of lovers this is something that is very interesting – this is the person who loves unusual partners, and although he knows to be conservative in some way, he has no problem linking himself to his best friend or even strangers – everything can come as an option.

What his lovers must know is that he does not tolerate underestimation, primitive statements, and aggression, and in these situations, he can show his own bad side.

So, when we know all of this, our verdict is that his perfect lover is the one that has Zodiac sign Sagittarius – open, direct and honest lover who can understand that sometimes success must come in all other areas and then in emotional life.

This combination of these two characters (the one with the luminaries in Capricorn and Leo and another who belongs to the Leo) in love is generally very good and has great chances for success in the relationship that will complete both lovers.

Both partners here are very tempestuous and turned to adventure, so they are a guarantee for a good time, but deep inside they would like to have something stable and meaningful that will last long.

Sometimes conflicts can occur because our candidate likes to be involved in everything, while Sagittarius lover sometimes does things on his own.

But we assure you that they will find a compromise.

When it comes to friendships, this is the person who likes to be the favorite of many people, and during his life, he has many friends, close and not so close.

He demands a lot and cultivates certain principles, and he expects the same from them.  If some of his friends hurt him, he is able to forgive, but he will never forget. His hostility is incredible; how unbelievable his great friendship is – he is an amazing friend and a terrible enemy.

He can be your worst nightmare, even if you were his close friend for a long time, he will either remove you from his life without any emotions, or he will make you suffer.

There is no doubt that this human being has a magnetism that attracts people to him; he demands a lot from others, but also from himself.

If he often misses a little more leniency, a man cannot be admired at the same time for the courage and “war” side – he will go to the end of what is in opposition to you, and he will never retreat.

This is an interesting Astrological combination of the luminaries, in which awareness of one’s own values must be confirmed not only from the outside world but also from the inner one.

This nature can really hire all of its own to win the position in the world that it considers to be rightfully entitled to it. He works best when he takes time and slowly built his success.

Although cautious and suspicious, he is fortunate enough to get to know good people through life – he often can an expressive individual.

The tendency in him is to idealise close people, but do not resent it, because he may not be the friend to the end. He can be a ruthless enemy, and this is a situation that should be avoided.