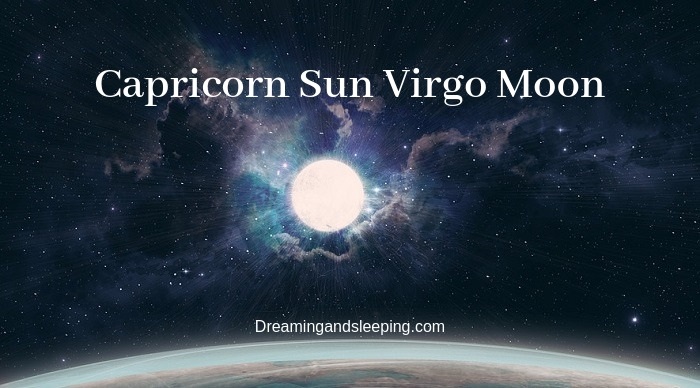 The Sun’s location in a certain sign in the natal chart shows us the temperament of a person and general states of activity in a person, and this is the Zodiac sign that is most important (and general aspect) in the horoscope.

This is the energy that is the initiator and executive, and it directs actions towards clear goals according to their individual nature and temperament.

Beside the Sun’s location, astrology deals with other elements of a natal chart, positions of other planets and also the position of the Moon that reveals energy and actions that is not the same as the Suns, but it completes the picture of one person’s life.

Today we will deal with these two positions, in a specific case of the person who has them positioned in the Zodiac signs, Capricorn and Virgo.

Right away we will say that this combination seems very stable since these two signs are compatible, and they share same, earthly energy.

This astrological combination of the luminaries makes this person thoughtful, persistent, and simply he is a compelling personality who acts with diligence, good energy, and expressiveness in things he feels comfortable. Here we mean things that he knows well and that feel good to him.

Somehow people are very interested in him, and he does not try to care about it, but he always tries to have balance, because he very much implies that the private side and the personal balance are built from the small actions.

Usually, he manages to stay “sober” and takes care of the influence of illusions and reality -and the combination of these two Earth signs (the Sun in the Capricorn and the Moon in Virgo sign) characterises the nature in which, above all, prevalent ego-centring, and meaning for practical purposes.

So the delusional side of his persona is not so pronounced, but he is the person who is positive, practical, who has arranged nature and who is enthralled by stability and safety.

When this person is working or creating something he is the one that is a genius organiser, for best results he demands order and methodology. He is a very detailed person that can drive others mad with such attitude and demands; he is the worst boss that you could potentially have in life, and irritating co-worker who will harass all others who do not work according to his plans.

He is the one that acts strictly and uncompromisingly to achieve remarkable results – this is his main motive in life, and this is entirely ok, but sometimes it should be more focused on the journey not so much on the result.

And the journey that he takes is hard and filled with obstacles that he feels are personal.

But here we get to see a problem – he is the one that tends, however, to lose details, to “populate” and hold the point, but he is up to us to resist them. He struggles in this way, because he does not want to lose essential details from the picture.

Of course, you will say that you do not know anyone without any defect, but for this person, this defect can be damaging.

He is the person who has a common sense; he is the one that has the initiative; he is orderly and organised human being who has the tendency to exhaust himself with unimportant things. His aspiration to perfectionism can often make his life very hard, for himself and for others that are close to him.

This is the person who is defined as one of the most loyal lovers among many Capricorn people – and this is particularly true when it comes to his emotions.

He is all having love for a lifetime, he believes that he should have one love, and can sometimes act conservatively, but he believes in love that way.

And if this sounds as conservative and traditional in some way, it is true, and he is that type of lover. But this is the leading motive in his love life, in a sense that he must have it in his emotional life.

He is very serious even when he is madly in love, in we can also say that he is not a fan of any spontaneity in love, but the thing that he does have is his idealism in love.

He believes that his lover must perfect, and he opts for serious relationships or marriage, rather than anything else. It is completely irrelevant to him whether it is formal or not if he has a pure emotion it is the real deal for him.

This is the person who in all life’s situations and with people strives to have Self-Control, methodical operation, knowing that all of this is leading to avoiding any adventure (this is maybe ok in some later years of his life, but while he is young and desirable this is a shame, cause he misses out a lot).

Such behavior generally keeps this human being away from dangers and heavy bumps in life and emotional states, but it could shut him down in a monotonous life.

So, he will wake up one day and realise that he had one lover all of his life, even if he knows deep inside his heart that he craves for some experiences in love.

At times it can happen that he will show a desire to change something in his love life, and this is all consequence of the fact that he loves life, pleasure, enjoyment, but an inner voice always reminds him to stop, to wait.

He likes to accumulate all his impressions, collecting them to the maximum, before he will let himself in some relation with another person, and not everyone is ready to wait so long for it.

As you could probably see in the previous sections which we spoke about love in the life of the person who has Sun and Moon located in the Capricorn and Virgo signs, he is, if nothing, very honest in his love activities and social relationships, in times when he is open and in love.

He is driven with the feeling that above love there must be one more thing, and that is the feeling of loyalty that must exist from both sides.

But we must say that this human being is a solid companion to whom one can count. However, his over-reservation sometimes puzzles the environment and exposes him to difficulties and caution that stops him from being madly in love and experimenting in love, as he should do, especially in his youth.

His long term lover can expect everything good from this person, and there will never be an ugly surprise.

The perfect match for this human being is born in the Zodiac sign Taurus.

This is a very interesting combination of characters in love where, after good acquaintance and time spent together, a mutual understanding and trust develops and stays on a superior level.

For this couple, it is very easy to find a common language because they share the same value in love and life of course, and this could be seen clearly when their desires, needs and goals in most cases fully coincide.

All people who have Sun located in the Capricorn sign are not approachable, and those who seem they are hide something very well, so this is one obstacle.

Another aspect here is the fact that the Moon in Virgo sign does not allow people to get closer than he thinks they should come.

So, he may seem as unbearable until you meet him (spend some time with him to say it simply), socialising with him and watching him out of his shell. Then you can finally discover that he is in many ways remarkable -people who learn this about this human being are considered to be lucky, because they are his loyal friends.

He belongs to those people who are practical and efficient when his assistance is needed; he is also very intelligent when he is in the position to asses a certain situation and to give a piece of advice.

Since he does not allow easy access in his life, all people who want to become his friends potentially must be aware of the fact that they need to earn his trust.

In the end, this process comes to additional difficulties, as he sometimes avoids public appearances and despises people at certain times of his life, in a sense that he is enough to himself, but this is another story.

This astrological combination of the luminaries is considered good, and it gives birth to one person, who is, if nothing else stable or knows how to get there.

Here we meet one person who is very patient and can build his way to success in a slow, but determined – he will reach his goal in the timing that he is set for himself, others do not concern him.

His character is a highly precise one, he is very aware of his values, but also his limits (this is so important for a healthy attitude in life).

He is on the quest, as a means of continuous improvement; it is the key to his existence that is defined by the critical orientation, but also a very effective search.

He is not afraid of duties that require diligence, sobriety and self-sacrifice; he stubbornly goes his own way, distrustful of the obstacles, taking care not to succumb to the strange temptations that will come in his way.