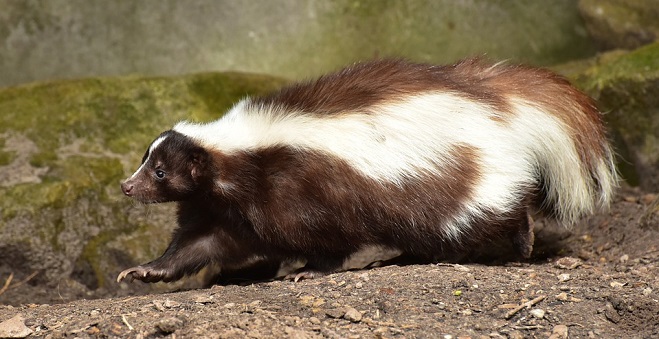 Skunk is a medium size mammal that lives in almost all parts of the world. They avoid dry areas of our planet and mostly settle down in places near forests and vegetation.

They have become interesting to people from the first moment their “special” ability was noticed.

These mammals have a special ability to spray liquid in predators faces, that has a very unpleasant smell. The smell this liquid produces is very unpleasant for people and other animals, but skunk uses it to protect himself.

Because of this special skill, people avoided skunks and considered them to be real pests. They were often used as a symbol to describe people’s personalities and behavior.

Defensive – Skunks are very defensive. They instantly react to even the slightest possibility of attack and spray their smelly liquid on their predators. They act this way in order to protect themselves and survive in nature since they have many natural enemies.

Courageous – Skunks will go great lengths to protect themselves. This means they won’t be scared if they get attacked by a larger animal. These small mammals are very brave and nothing will scare them away.

Aware – Skunks are always aware of their surroundings and nothing can surprise them. They need to act this way because they can easily be tackled by a larger animal.

Skunk as a totem

Skunks as totems are symbols of defensiveness, protection, courage, assertiveness, and prudency. People born under this totem are very defensive. They easily get triggered by other people’s actions, so you have to be careful around them. Some might even call them sensitive because their emotions get easily hurt by other people’s words and actions. 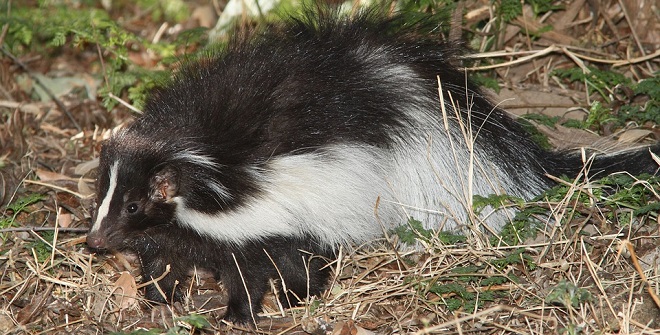 After noticing a possible “attack” they will get super defensive and even attack back. They act this way because this is in their nature. If they were any different, they wouldn’t feel like themselves. This kind of behavior helps them protect their lives from others.

People born under this totem are also very courageous. They are ready to go great lengths in life. If you were born or protected by this totem, then you are not afraid of anyone.

Tough people and problems don’t discourage you and you do not back down when faced with them.

These people are always there for the people they love. This makes them great friends and life partners. They will be by your side in every tough situation and guide if necessary.

They enjoy spending time with their friends and family members because they are the most important people in their life.

People born under this totem are also aware of things that are happening in life. They keep track of everything and you won’t catch them off guard.

They will inform themselves about situations and people before they even encounter them. This is in their nature and they simply can’t help themselves.

They are very cautious and this can even be considered their flaw. They are always on the watch and because of this, they miss out on a little bit of adventure.

They need to learn to be more spontaneous in life and let go of their need to control everything.

Balance is another thing important for them. They reach this balance by creating a perfect environment for them to live in, and including only things they are fond of.

Everything that makes them anxious and angry, they tend to exclude from their life. This is why they often let go of people who no longer belong in their life.

People born under this totem are also assertive. This means they are going to take action in life no matter what.

Even if this action means sacrifice and danger, they know what needs to be done and they won’t back down. They take what belongs to them without begging or chasing anyone.

Skunk as a symbol in a dream

Dreams about skunks can have different meanings. Some interpretations are positive and others not so much. This, of course, depends on the dream situation you had and the way things were developing in the dream.

If you had a dream about seeing a skunk, then this dream represents people who like to suck up to you. They are constantly around you following your every step, and they always seem so amazed by everything you do.

If you had a dream about smelling a skunk liquid, then this dream is a representation of rage you have inside you. This rage is something you need to get rid of before it completely ruins your life.

If you had a dream about being a skunk, this dream implies you are very cunning. You know how to get by in life and people cannot fool you easily. Make the best out of this skill and use it for something positive.

Dream about killing a skunk is a representation of revenge. You might be plotting against someone or someone might be angry about something you did.

Skunk as a symbol in different cultures

Skunk symbolism is present around the globe. Skunk usually symbolizes assertiveness, introspection, courage and defensive behavior. People from different cultures avoided skunks because they were put off by their smell.

In Native American culture, skunks were considered to be deadly. They thought that the liquid they spray is poisonous. After they found out that skunks are not poisonous, some tribes even admired them for their bravery and courage.

Skunks in European culture is featured in many songs and folk tales. They usually picture skunks to be assertive and brave and always ready to attack. This is why almost all cultures avoided skunks and only considered them to be pests.

In popular culture, skunks are often used in cartoons and movies. They are beloved characters and probably the most popular version is Pepe Le Pew, a popular Warner Bros cartoon character.

Overall, skunks have that one special ability that isn’t always something to be bragged about with. However, this small animal carries great strength and courage in him and those are definitely traits to be desired.