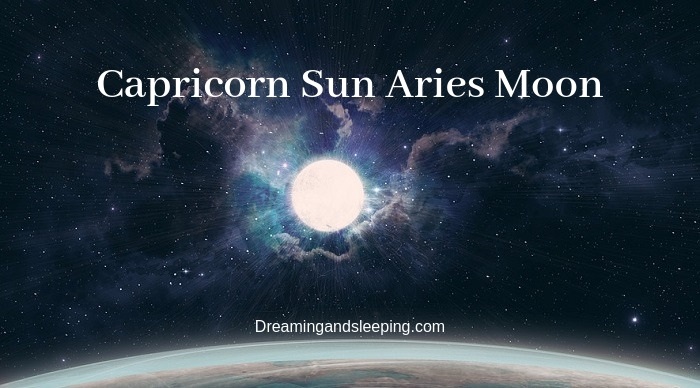 In this piece, we will deal with the person who has Sun located in Capricorn sign and the Moon in the Aries sign; the Capricorn belongs to the earth element, and the Aries is the fiery sign.

We will try to reveal as much as we can about this human being, but for a start, we will say that the earth element depicts people who are grounded and who are usually very strong. They feel this world with their reason, and they are grounded, sensual and down-to-earth, with a pragmatic and concrete approach to life.

And we can assure you that the person who has such elements in his natal chart, in this case, luminaries, has such temperament. Of course, we will try to give you as much information as possible.

This is the person who has luminaries located in Capricorn and Aries signs has more confidence, and you are more piercing than the typical Capricorn person. He is restless, and his approach to the world is direct and ambitious, and he usually becomes a natural leader who will take the game and make it his own.

This is the person who is ready to play according to the rules, then he takes the game, and in the end, he wants to be a leader who will write the rules of his own.

Even more, this human being is distinguished by the richness of interests, and above all, he has ease way in solving the problem in a logical and clear way; he is perfect in its actions, is inextricably linked with the decisions it has made.

He does not have any problem in taking the responsibility of his, sometimes fast decisions, and he teaches himself to learn how not to make the same mistakes again since such actions will jeopardise his success.

The certain lack of flexibility present in his character is almost not noticed because he successfully compensates for the real ability and endurance in the service of ambition.

Sometimes this person a harsh temperament, and his behavior oscillates between the impulsive and the warm attitude, both cold and reflective, and this confuses the environment.

Sometimes he can confuse himself because his heart will say one thing and his actions and attitude something else.

The one that has Sun and Moon located in the Capricorn and Aries sign is often when circumstances are such, very provocative, sometimes shy, or withdrawn. And it would be best if he could found some middle ground and act accordingly.

He puzzles his environment with contradictory behavior: it is carefree, impulsive, radiates feelings and warmth, and in another moment he becomes a reserved, immobile, cold observer.  His environment can be in a big problem because of such behavior, and he himself sometimes does not know what side is going to be at surface.

For this person who has Sun and Moon in Capricorn and Aries sign, there is nothing more difficult than removing fierce passions (the Moon in Aries) and cold thoughts(the Sun in Capricorn), expressing oneself and withdrawing into himself. He shows a certain kind of shyness in interpersonal relations, but he wants to have of earthly paradise, and the quest for a stable love life.

This is the person who is unhappy because he wants to live, but he hinders himself; he has passions, but others may see him as the cold one and to pride to show what he truly feels.

But there is one more relevant thing that we must speak about his sensual side – this is the person who finds sensual pleasures as a very important thing.

He likes to direct his love life and can be, after a while, very passionate. His impulses that go into the hurry can cripple his partners, so he needs to be very careful.

The main thing when it comes to the love life of this human being is that he never rushes into marriage or a long-term relationship so that he can enjoy a stable community. Although this is a career-oriented person, family support, especially emotional passion is what is related to him, and because of this, this field is crucial to any success in his life.

We must also say that if in the life of this person there is no emotional balance, he can be in constant search for the right person but have longer phases of dissatisfaction that can go into destruction, which can cure his overly sensitive heart (and even worse this person cannot show how sensitive he truly is, but others see him as cold).

Sometimes it’s hard for this human being to restrain in a loving act, so he can become violent too, one trait that can come as a major surprise to his lovers, but the Moon in Aries shows this characteristic.

When relaxed this human can be spontaneous and can be completely open to his long term lover and reveal little secrets. He is able to stimulate lovers to tell what they want, and this type of communication is the most healthy thing he can do in his relationship, and also to expect the same openness in return.

It looks like you do not care too much about others in your striding race to the top. Look back at times, because it’s possible that you do not notice in that chase even when someone puts your foot on.

We cannot say that this person is favored in the eyes of potential loves, but he does not mind because he just wants to have that one lover who will accept him completely, and more importantly to know that behind coldness there is a warm and tender heart that wants to be loved very much.

He is ambitious, and before he settles down, he must achieve most of his goals, any relationship that will come before this phase is destined to fail, or he will not be able to give the best of himself in the emotional sense.

But his lovers must be aware that being with this human being who has Sun and Moon in Cancer and Aries signs is not easy, but also there is a  suppressed feeling that makes him feel sensitive: he needs the kind of love that will be something that is calming and passionate at the same time, so that it does not jeopardise his success in business.

The perfect lover for this human being is born in Scorpio sign, and his passion and deep understanding of human nature will certainly help him achieve a long term connection with our candidate.

This combination of luminaries is considered very powerful when it comes to a love relationship, and they have the harshness and strong emotional and sexual compatibility that is more pronounced among them than in many other signs.

Such a combination is also considered to be more lasting than some others (especially if it comes at the right moment), and these two can hope to be together in harmony, never forgetting about passion.

This is the person who often attracts a different kind of people, but there are many eccentric and unusual people among his friends.

Although born to be a great planner, this human organises everything, but with his friends can enjoy sudden personal happenings, and everything will go according to the “all or nothing” principle.

In a social arena, this is the person who fights bravely and persistently to implement his ideas. His ambition is more than necessary to achieve a goal or an ideal to which he will devote himself completely. He cannot be limited to others and only satisfy himself with a place and people who just provide him with the security.

This is the person who needs to have something that will be bigger and more valuable in his eyes – and this is justifiable, although he can be seen so different from others, so he often gets misunderstood. There are only a handful of other people who will accept him for who he truly is and who will understand his ambition.

If we want to sum up all that we know about the human that has Sun and Moon located in the Capricorn and Aries signs, we must speak about all characteristics that describe him.

He has a developed sense of duty, an iron will and a noticeable ability to concentrate when necessary. All of this is connected with the aspects that bring Sun’s position in the Aries whose impulses promote the manifestation of indisputable abilities. He is ambitious and knows his priorities in life, and the best scenario for him is to achieve the majority of his goals and then to deal with his emotions.

This is the person who seeks to preserve its enthusiasm and restore the power it carries within itself, but he also has to defeat his inner conflicts, since he is not inclined to dream or nonchalant behavior.

Even more, this person is a brave fighter who dislikes all superficial things, but he will remain loyal to his feelings; even if he would have a problem in showing them in the right way, openly.

He needs peace to rule himself, and loneliness to concentrate. He sees his way more like a path that needs to be passed than as a series of moments that need to be more intensely conveyed. So he builds his present as a function of the future he is yet to create, whether it’s a career or his development as an individual.