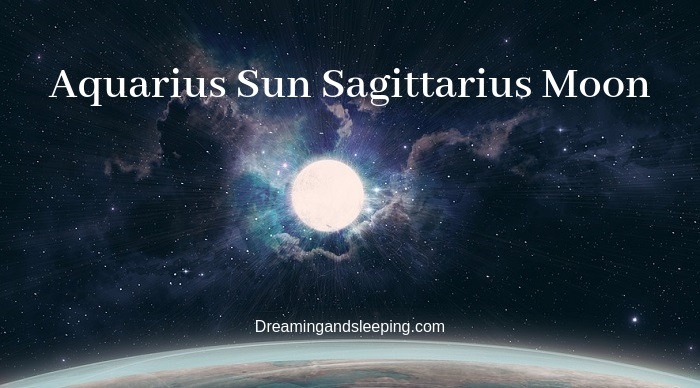 Some astrologers like to speak very concretely in terms of knowing the future, and even if such predictions are not so certain, we can speak of them and make some moves in our lives.

For example for a person who has Sun located in the Taurus sign, we can say with a large amount of certainty that that person is going to, at least in one part of his life start his own business. And he is very well equipped for hard work in this matter – he will work hard, but he will expect to get some compensations of his hard work.

Then if his Moon is located in, for example, Aquarius sign, he is most likely to be an individual who has futuristic ideas.

This is just an example, and in the next sections, we will speak in details about the person who has Sun located in Aquarius sign and the Moon in Sagittarius sign. This is one very interesting combination, and these luminaries are very well positioned.

This is the person who is guided by the inseparable hope and a person who has great faith in himself, endowed with the originality of view of the world, and this person has some kind of drive for progress, which lies among innovators.

He has that one of a kind inexhaustible power that directs him into the depth of things, and he is always looking for the deep reasons why people are doing what they want to do and behave as they do.

He is the one that has a very strong personality that is in some ways combined with his possessive instincts.

He is the person who can be very busy, but he is always striving to maintain his freedom, never to allow others to restrict him from it. His personal freedom goes beyond freedom for all, in some kind of spiritual ascension which destroys anyone who will try to harm some human principles.

He is the one that strives for overall harmony and would like to make his contribution to the world, not just for himself and his personal gain.

This person does not know fear, but as much as a restless spirit in his youth; in the mature years he is ready to “settle down”. Often he has exceptional humor, leisure and those who do not know well this person do not know his problems and boundaries.

Ideas, ideas, plans, many of them are constantly buzzing in his head, and they are very original, but the problem occurs when they are not realised in reality.

And even worse, a person who has Sun and Moon located in Aquarius and Sagittarius combination does not seem to care about it, and he pushes himself even in some destructive way.

He is very well aware that he can shock his environment as he has interesting surprises up in his sleeve, but others are just not always ready for it. This person thinks that he can meet himself through others just by watching, concluding and without the bitterness and any pain, but this is just not possible.

He is engrossed in freedom and independence, and less engaged in the group for which he can be bound by his destiny, fighting simultaneously against the average and monotony; but this kind of attitude can also lead him in some strange directions that he does not understand in his life.

He is the one that can be extremely independent, and people who are too conservative, traditional do not like it at all and even can become his enemies in a sense that they believe in things that are opposite.

In the end, this is the person who does not like any rules in life, but he is also the one that tends to the business and material security that comes in time.

His enthusiasm has no boundaries and certainly should have this person as a friend or lover, but we must say that he can be the one that may be as a partner can be too independent, but he certainly knows how to love.

For him, love in any of its forms and shapes must be very open and free, and he finds that he has to have many experiences in love before he settles down.

In the end, love can be the process that will give him some lessons to learn, it will be an education, because he is the one that wants to teach others, so the main connection in love, for this human being, is intellectual.

There is no doubt that this person is the one that is filled with energy and does not know the fear when it comes to risk-taking, and being crazy in love is one of those things.

Sometimes he is involved in the connection that is not suitable for him, but he still believes in them, and nothing can destroy the great enthusiasm that gives him the strength – his optimism has no limits and when he believes something nothing can stop him.

In fact, we must speak of the Moon in Sagittarius gives you good, healthy humor and non-shameful behavior -he is one lover who is very relaxed and spontaneous.

He has a sense of initiative and feels comfortable in almost all areas of life, and the same situation comes in the area of love. He is the one that truly believes that when he is with someone he loves, he must say what he thinks, and he is not diplomat in personal relations.

Nevertheless, he knows how to attract the sympathy of the environment, and has many potential candidates for lovers; and he can have good relations with almost anyone, only if they do not jeopardise his freedom and independence.

So, the one that has Sun and Moon located in Aquarius and Sagittarius sign is the person/lover who is extremely open, focused on everything new, advanced, original, and would adore if his lovers are just like it.

The inclination to sometimes surprise the environment and the family as much as it can. As much as a person is turned to the public and attracted attention, he likes for his lovers to know very little about him, because he loves privacy.

The perfect combination with him is the person born in sign Gemini, and we believe that this is one of the best combinations in love.

Note to all of his friends – a person who has Sun and Moon located in Aquarius and Sagittarius must have freedom and independence in every personal relation, including friendships.

The keyword is, therefore, freedom – the freedom of thought, speech, and action – and he needs friends who will either follow his lead and be the same or those who will wait for him and be his station, but never a break.

He loves his independence, and he will not allow anyone to interfere with his life or work, and the same case is with his friends, who love him very much but must follow the rules.

He can be a friend that is carefree and helpful, quite restless at an early age; however, intuitive and idealistic, he often wonders in life and has a problem in settling down.

So, he loves to have friends and to be connected with people in some deep way, but on the other side of the story, he is comfortable in being alone.

Astrologers say that this is a combination of the luminaries that is a consistent combination, since intellectual and spiritual possibilities are mutually complementary (the Sun in Aquarius and the Moon in Sagittarius). Here’s a good friend of himself and other people, but he is also the one that could be without anyone; he does not need anyone to feel great.

He is, in a way, an anti-fatalist who thinks that he always has “something to do” in order to improve his environment or solve an unsolvable problem (for others)

He manages very well to be in line with everyone around him, but he must have at all times generous freedom. This human being can be called an optimist whom no temptation can interfere with. He constantly and desperately asks for things to defend, such attitudes can cost him a lot, be he is ready for such a task.

In some simple way, this is the person who can, in a simple way he succeeds in freeing himself of all the doubts that are the biggest obstacle to his advancement.

In the end, we must say that the person who has such luminary position does not need to explain his way of life to others, so in his life, there is no place for others and their personal impressions and the possibility of influencing the actions, decisions and character of this individual.

Though he feels an infinite and incomprehensible side of reality and does not hide from it, he knows deep inside that he understands it as a little one, his most profound meaning and that his life is worth doing something special.