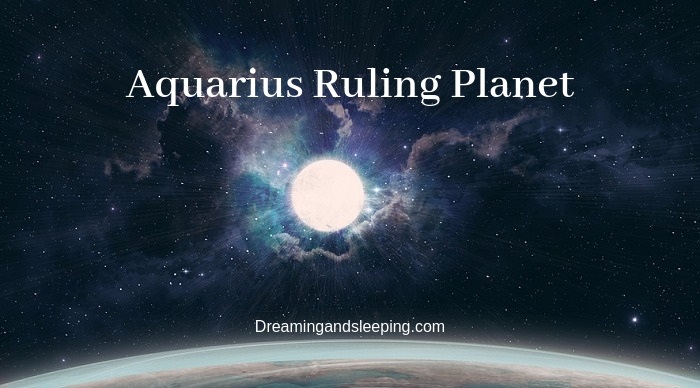 There are ten planets in Astrology, and these planets symbolically show harmony and understanding in the sign they rule – this impact is always visible, sometimes bad and sometimes good, and often a mixture of both.

Under each of these ten planets, there is one Zodiac sign, and that impact can be strong or weak. If the planet is poorly placed, it means that that sign will have more negative traits that come from the planet that rules it, and vice versa, it can bring more positive traits.

When we are talking about the Aquarius Zodiac sign, we know that it is their sign that is ruled by the planet Saturn.

Read all about these human beings who have many positive traits – they are imaginative; they are, above all, very intuitive and independent.

Aquarius people are very independent, and any attempt to contain them will make them flee – they will never have any problem in any leaving things, people, jobs, etc. if they feel that they are jeopardised.

They can turn away, without ever looking back and the reason why they will never look back is the fact that they are continually looking into the future, developing new ideas that will lead them to something they want.

Aquarius people not only want to be independent, but it is also necessary for their well-being – if they do not have that freedom, they cannot be the best versions of themselves. This is a shame because they have so many qualities that deserve to be seen.

Under the reserved and insensitive exterior, there is a friend with a very good heart who is very trying to help the others who need that help. They do not expect anything in return because, otherwise, their freedom can be limited, and they like to live without any ties.

They love to smile and cheer people, and that makes them feel good – Aquarius people are under the Saturn’s rule, but unlike Capricorn sign, which is serious, are funny and can be sociable.

These Saturn children are very extravagant and full of excitement when they find interesting and new. People loved them since they like fun – Aquarius is a sign of vision, extravagance and intellectual independence.

They always stand out from the crowd and go their own way; this can be seen in their constant need for intellectual stimulation (and it usually is just that), but also the discovery of something new, the formation of new thinking and the stubbornness of their own, no matter what others think.

And sometimes in life, it is quite necessary to be just that rebel who thinks that he is doing the right thing in life, not what others think about it; these people show integrity and strength to change things, with all consequences.

And all of this is nice, but the Saturn planet is not so perfect, not in the case of the Aquarius people, because even they show some kind of inactivity even if their ideas are grandiose and directed toward altruistic motives.

Aquarius are rebels only because of the desire to follow their path, sometimes even these people are not lead with the humanistic motives, but something else, and else is their egoistic plan.

Because of stubbornness they sometimes experience failure (in all aspects of their lives) because they usually continue to do it even when others have proven their way is wrong – to have your own way in life is one thing, but to never listen to advice that comes from people who are wiser and want to make you better is another.

They are smart and know that it is wrong, but they will continue to do so only because it is their way, their idea – they believe that they are always right and that they know the best.

The fact is that Aquarius people (just like Capricorn people, who are also ruled by Saturn) are extremely stubborn and never say that they are wrong. They are very stubborn and hold to their opinions in conflicts.

However, while stubbornly defending their point of view, they do not like when things are imposed on them, because they respect individual differences.

When it comes to love and human relations, right away, we must say that these people are very independent, and are not one of those people who complete only when in partnerships.

They want to be deeply loved and to feel good, but at the same time, they feel comfortable when alone, they even do not have any problem in staying single for a long time or looking for a suitable lover in later years of life.

They do not like to tie (anything that is permanently or all the time is not suitable for these human beings, and they would avoid it by any cost).

Aquarius people can sometimes be unpredictable and eager for excitement – they fit into all patterns, and every lover they choose will have an exciting relationship with them.

They feel good when they flirt, because they expect it, but can be very traditional in that sense, but know that they make decisions in advance, if they are not interested, they will never be (this is the point when their ruler Saturn comes to the surface and put some limitations in front of them).

Love relationship in their lives progresses slowly because they do not express emotions so easily and do not respond to romantic outflows of tenderness.

So, a word of advice for all those who want to be a part of their world – those who want to conquer Aquarius people must treat them with respect and never try to take away from them anything that will jeopardise their individuality and freedom.

Aquarius people like to do something useful in their lives – and in it, they use their incredible intellect that produces many ideas that can truly change the world.

They incredibly trust people, making them good politicians, social workers and psychologists – anything they can do to change people’s lives for better they will do it without a doubt.

These people are preparing themselves for some of the biggest roles in their lives, all of their lives, and have no problem in waiting for their achievement a long time.

They think progressively and are excellent in shaping new ideologies and theories so that any type of research work fits them; in many cases, you can find them isolated in time when they are developing new and interesting ideas that will change the world – you can see these people as true game changers.

But we must say that these people do want to be recognised for their hard work, they will never oppose any reward that will come their way.

Aquarius people, as children of the planet Saturn love grandiose ideas and great plans, which they can accomplish, but are hindered by everyday details that make them hesitate in this.

The only thing these people need is someone who will remind them of some responsibilities and obligations; they can be forgetful and can waste energy.

Saturn needs nearly 30 years to go through the whole Zodiac – and this is the planet that is known to be called as the Father of Time.

This planet is related to old age, even death, and limitations in every sense of those words, but in the case of Aquarius people, it is all about overcoming limitations.

So when we meet Saturn, we do not think on death as something dark and gloomy, but more on some change and understanding that life takes sacrifice and change, and our ability to change ourselves so that we can overcome all limitations, and become better people.

Saturn tells us when it’s time to stop and force us to grow up learning self-reliance and renunciation – this is the planet that teaches us about the limits of our possibilities, and in the Aquarius people, they are all about overcoming them in the best way they can. Saturn is a planet of achievement and ambition – the traits we need to achieve life’s success, and Aquarius people do have it.

For this sum up, we will also say that these people can be seen, with a reason as people who are full of paradoxes and are interested in both ends of the spectrum – they can be dark and light at the same time, and they know the depths of many things in life.

On the one hand, they like to be alone, and on the other, they are social – everything these people do can be the best and worst. They want to see both sides and two opinions when they form new ideas.

Aquarius humans are guided by the principle of “living and letting others live” – and this can be triggered with their own need to be left alone, to be different, or with the true desire to live in the world where there are no prejudice and judgment.

In the end, we must say this – Aquarius human beings have kind and warm nature, but at the same time, these people be the worst enemy that you have ever meet in your life, who will mercilessly remove things that bother them.