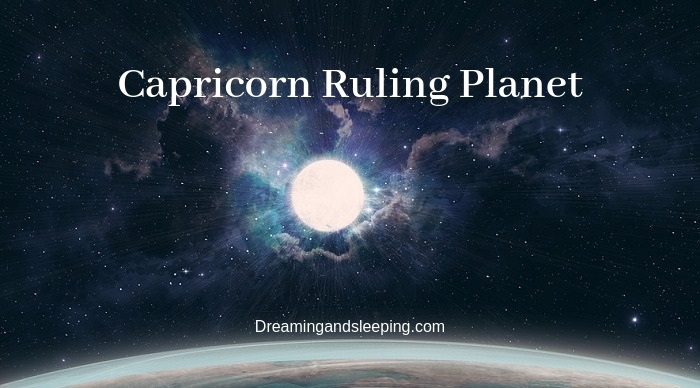 Even if we know that there are an infinite number of planets and all of the kind of objects in the Universe, our life is in many ways connected to our solar system, and nine planets plus Sun and Moon that affect our lives on the Earth.

Astrology also uses this as its starting point, and without planets, there cannot be horoscope – it is all connected planets among each other, and with people through their personal horoscope.

Today we are looking into the life of the people who are born in Zodiac sign Capricorn, so we know that their ruling planet is Saturn.

Capricorn is the tenth sign of the zodiac – and the planet Saturn that is in charge for them is one of the planets that give a fascinating insight into their lives, and it can have a different approach to them.

There is one more thing that we must mention here, Saturn is the ruler of two neighboring signs, Capricorn and Aquarius, and this is the different approach that we talked about. It takes about 28 years for the Saturn to go through the Zodiac cycle, and in every sign, it is about two and a half years old.

We are saying that these two Zodiac signs are so different that it is almost impossible how these two can have the same ruler, but the fact is that they represent the same coin but the different sides.

Saturn is a God of time, and as time goes on and deals with many things, Capricorn people have the time to grow or to stay in one same place.

He is the ruler of time, which is a relative term – he has the opportunity to become the stronger, the better and the firmer.

Read more about this Zodiac sign and its traits.

Capricorns who are naturally slow and serious, and as the time goes on, they have the opportunity to become stronger in life, so the main thing is that these people truly have the chance in life to become better in life, even if that change comes after many years.

But the planet Saturn makes Capricorn people very patient, resourceful and disciplined – they can truly make their life successful. Especially in the business plan of their life. In this sense, Capricorn people are very successful and ambitious; they have clear goals in life and know how to get there.

They are “getting there” by using all ideas, intellect and plans as they have, and they do not have any problem if that road to success takes for a long time, Saturn learns them to be very patient. It teaches them to wait as long as it takes, and the biggest motivation for enduring all problems is the vision of them sitting in the place they feel that they deserve.

As the contrast to Jupiter, a planet that symbolises expansion, Saturn is a planet’s limitations. It teaches us in so many ways to face our responsibilities and never run away from them. So, discipline is the key to Capricorn people and their proven way to success.

Saturn is the planet of limitations, and it runs in the darkest months of the year – this makes Capricorn people so serious when they are seeking their place under the Sun.

Capricorn is a sign of status and is seeking its place in the world – and he is the best example of the person who will voluntary take restrictions just to make his goal true.

Capricorns are very independent human beings because they know their abilities and therefore, rarely leave others to complete their job. They love to do it all by themselves – many people say that they are the most stable of all Zodiac signs.

Also, these people are true and loyal friends who are always there to help who need their help, they are compassionate and caring for a friend in trouble. Capricorns can lift everyone back to their feet with a firm plan of success, not expecting anything in return.

Sometimes they may seem mysterious, but it seems that something is always happening in his mind.

In some other introspection where we are talking about negative traits that are connected to these people, we must say that they are pessimists, critical to the point of passive aggression, can be very selfish and cynical toward other people, even those who are close to them.

Often, Capricorns put their business and career into the forefront, before everything else, before interpersonal relations and any “small” pleasure, they like to wait for the big thing as often as they can. Social and business status is very important to them, so they are often obsessed with success and like to dominate.

Capricorns are conservative and stubborn, and their mind often manages their hearts, and how can you be logical in the matters of the heart.

Also, these people shy away from the discussions and can enter miscalculation, so they pull many wrong moves in life.

They have a problem with expressing emotions, and instead of showing emotions, analysing them or returning to past mistakes. To avoid disappointment, pull into their world in which little is allowed to inspect – this is a sure way of reclusiveness and coldness that they are prone to. The comfort, in this case, is the business success that feeds them when they fall.

These people can be very passionate and like physical touches but are not overly sensitive (when looked from the outside). This means that they have the ability to love, but at the same time, they are not prone to romantic gestures and showing these emotions, they prefer to hide them.

They are under the impact that comes from the Saturn, and this means that they deeply crave for love, but it takes time to show it because they find it difficult to trust another person.

The most important thing for their lovers is to show Capricorn people how much they admire and gradually win their trust.

When in love, these people can be very faithful, probably the most faithful of all the horoscopic signs. Below their mysterious and dark nature, the romantic line merged with sensuality – this side of their character is completely hidden from others, and when it is discovered, their lovers are attracted with their transformation! Patience and trust are crucial for a people born in Capricorn sign.

They seem boring form many people because they have a strictly organised life and do not like when anything interferes in it. Because they are enough for themselves, the Capricorns are misinterpreted as cold people.

However, they are not as cold as they look; they just like to do everything for themselves.

Their ruling planet, Saturn is the planet of discipline, responsibility, all our fears – in some way these human beings can make their dreams come true just by listening to their discipline and being responsible.

These people are leaders in leading their team to success, and they always want to climb on the business ladder and be the best they can.

Capricorn people truly have a great feeling for the timing and very effectively manage it. They are great organisers who are on top of all other things are creative, although not spontaneous as they may accept. Thanks to this feature, they are skillfully managing time and have great ideas for implementing a plan to work.

Saturn’s children, Capricorn people are good and wise investors because they look long-term and know how to assess what is the most profitable – if you want to save or invest money, call your friend Capricorn.

They are adorned with melancholy and strictly because they live according to the principles of self-discipline and responsibility. They all evaluate and do not like to go into anything until they first see all the advantages and disadvantages.

Saturn is the planet that requires us to reexamine, and in the real-life balance, as you sow, you will also rebuke, but we often do not understand it because of the limited consciousness that is miserable in relation to our unconscious part.

Many Astrologers say that Saturn is the “negative” planet that does not carry anything good, but this is not true.

People with strong Saturn have a strong sense of responsibility, they are very serious, and they like loneliness – since Saturn is a slow-moving planet, so it’s no wonder it’s said that Capricorns usually get everything in life later and with more effort than other signs.

They can be cold, conservative, unchanging, and traditional; when things are not going in the right direction, they can be really depressed. In interpersonal relations, Capricorns act discreet and are prone to loneliness, but they always act rigid, introspective.

They can be jealous, materialist, but very practical, and proud at the same time, and we believe that they should not be judged, they are just humans.

In these people, there is a fear that something will end or do it properly. They have a strong need to control their lives and their environment, which sometimes reflects on a person’s life.

They believe that they can arrange and arrange life for other people, which they are able to do, but people sometimes consider them to be intruders because of this.

According to them, there are only two modes of action, good and bad, and because of this reason, some Capricorn have narrow understandings, they are stubborn and disagree with others.

They must learn that there are several appropriate ways to do something and that, even if their solution is right, they should not impose it on others.