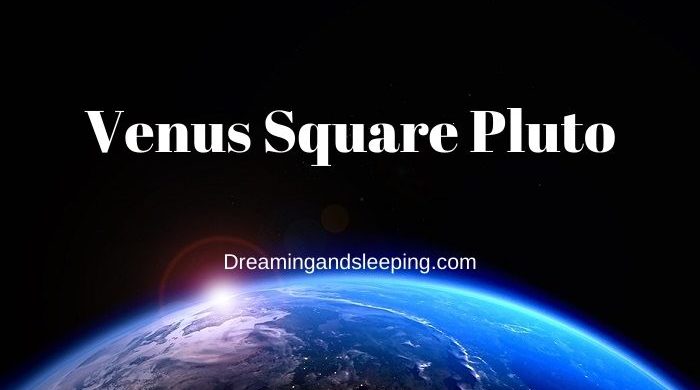 Before we speak more about the synastry, we must study each natal map individually, and all aspects and houses that exist in that natal chart, from this you can understand that this is not an easy task. But, it is the task that can reveal so much about the person and its personal relations.

This is important for several reasons – we need to find out what kind of person we are dealing with – what are its interests, whether that person is an emotional or intellectual type, etc. This is the basis for the deeper understanding that is necessary for synastry.

We should start this by knowing that the planet Venus denotes beauty, art, style, fine behavior, womanhood, and grace, among all other things. In a female horoscope, it represents what we are like as women, our femininity, how we position ourselves, and what we love in relationships.

In the male horoscope, it represents the characteristics of women they love and are attracted to, as well as their wife.

So the square position that is created with Pluto is connected to the love (as synastry always is connected to love and interpersonal relations or connection formed between two people) and Pluto is a planet coming from the Underworld, we get the difficult position.

Pluto is very interesting here since this is the planet that comes from the depths of unconscious existence, and it is said that if you learn (or master) the planet, Pluto involves mastering the hidden energy, which is most often blocked, especially in the uncomfortable aspects (every uncomfortable aspect on one level is about blocked energy).

One can easily identify with their conscious planets and what about those planets that reside in the realm of the unconscious? Here Venus and Pluto are “married” and what kind of connection it will depend on so many other aspects that go deeper into the personal natal chart.

You need to know that in the case where these two strong and potent planets are connected in a square position always indicate fatal love; in which way this will be seen in the lives of the people who have this position depends on other aspects in their natal chart. 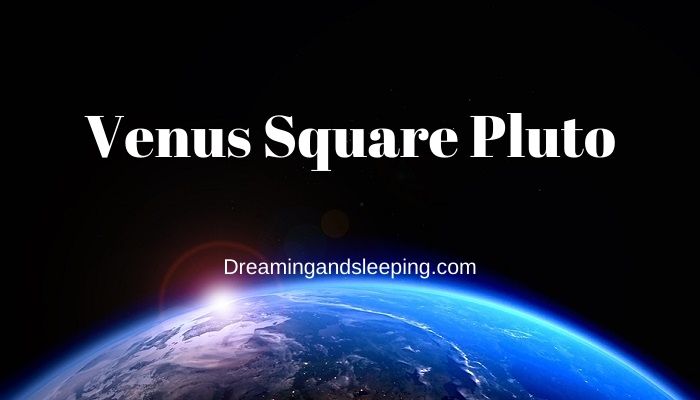 When we say fatal love, everything from one of a kind, amazing, overpowering and passionate love to the opposite – jealousy, pain, and even something that is more extreme.

We get fantastic, or people who are not really in love, and this is why they can make a hell out of lives of their lovers. Or they can make a fairytale; it all depends, as we have said, on other aspects in the natal chart.

Here, in every of aspects that we will discuss; we will look it through the eyes of the synastry, or through the eyes of personal relations. Relations with others are out of most importance when we talk about any synastry and any position in the natal chart.

These individuals are not comfortable with superficial relationships, and everything they do must be truly deep, and they expect from the people who are around them to be dedicated to the core, or they will not remain so long in that connection. They will rather be lonely and have no one on their side, then to be in something that does not have any depth.

When they cultivate self-awareness and self-love, they will attract deep and high-quality relationships.

This is the main quality that could be seen in their lives – they dedicate themselves to everything with a full passion, and there is nothing that could derail them from that path. They either do it, or they show absolutely no interest. There is no middle ground with them, and what is especially important they have their conditions that must be met or they will not even think of doing something.

This aspect shows that they have a subconscious fear of love betrayal, and that is why they approach relationships and partners very insecurely and suspiciously. Vindictiveness is very much shown in this aspect, and these individuals have to work on forgiveness because if they continue to be hurtful and vindictive, they will attract partners with the same characteristics.

This is truly important to know, people who have this square position, and if by any chance, they have some other, unfavorable position in their natal charts, could become true fanatics and psychopaths, and people who are connected with them in any way, will suffer badly.

They tend to test partners, especially at the beginning of a relationship – but this transcends their love life, they behave like this in any connection possible, and the reason is the subconscious fear that destroys them completely and utterly.

Yes, they are tormented by fears, and it is something that is making them suffer deep inside and makes their lives and personal connections problematic if not worse.

People who have this aspect in their charts are born with the program that is a subconscious program that makes them believe that love is suffering, excessive possessiveness and jealousy (this is clearly a combination of the forces that come from, Pluto and Venus).

Their mission in life is to try to overcome these traits just because they are mostly attracting those who want to control them. Often, in partnerships, they feel trapped and nothing to ask.

In addition to attracting jealous and possessive partners, they also share the same traits.

Another thing must be mentioned here – people who have this aspect in their charts often suffer insecurity about themselves and their appearance, and that is why they think that if they are constantly mean and sexy, they will not be left behind or cheated. They are good in bed and have the ability to control partners through sex (the strong effect of the planet Pluto).

In some other cases, people who have control, but they also love strong lovers. In some cases, this square position indicates the planned conception of a person before a serious relationship or marriage, in order to keep that person to themselves.

The square position between these two planets is felt so strongly, and what they can expect from such a combination is not sure, it can go from one thing to its opposite.

Passions will be emphasized and how is it square with Pluto, jealousy will be more pronounced than ever – their lovers must be prepared for that, and if they want to stay with them in love, they must balance these tendencies.

Those who are in a relationship, and have this natal aspect, could get into a big problem from situations that will be extremely obsessive to dramatic break-ups, jealousy, threats, persecution.

Some describe this square as a love jinx, and it is the one that speaks of lovers that are completely overwhelmed by pain and unspeakable sadness, cursed for waiting for loves true moment.

At times, because of this curse, they can go in a circle, transferring from one life to another, asking when it all will stop. How and in what way can we change this aspect, if we have one?

As we have said this is the aspect that mostly affects love connections, and maybe the best way for overcoming this “unfavorable” position is to allow losing ground and be drawn into a story that can end up costing you a lot.

This kind of connection is able to create volcanic pair of strong passions and magnetic attraction toward a certain profession, and they want to achieve success in only that, or they will not do anything.

Admittedly, it is a square, rather uncomfortable aspect that gives the whole story a taste of fatality – so their vision of work is that they will do what they feel in the heart is right, or they will not do anything.

In some cases, it is said that this aspect is found in the horoscopes of those who will do some job that is not normal for others, whether they use their sexuality solely for seduction and reaching their destination, whether business or material. This setting is certainly the strong passions that have a rather pronounced dose of perversion.

However, many people possess this aspect without being even aware of its powerful effect. It can bring talent, but it can also come with tools that could destroy not just that talent but everything else, bringing people who have this aspect to the misery and pain.

Those who have it must be focused on what they do, and how they nurture their talents since there is a possibility over ruining everything.

Maybe, for some, this aspect means that they will have to face their own effect on others, or they would have to face how others affect them in their job, are they able to deal with that kind of pressure and maybe hidden jealousy.

We often think, when we hear that a certain planetary aspect is active in the night sky, that it’s not us, it’s some other people, some other circumstances and situations. And in fact, everything that happens to us in life, and even what we don’t want, is actually us, parts of us that may be deeply discarded somewhere that we don’t understand or won’t understand.

And this is the basis that is behind the synastry, and from the square position between Venus and Pluto we can learn so much, and all parts, in fact, they want to integrate into our lives in the most meaningful way, and we are the ones who need to recognize them, make them aware, and receive them, and eventually, a transformation takes place (have in mind that the planet Pluto is always responsible for transformation, even if this means that something must “die” in return).

Venus, in an uncomfortable aspect with Pluto, can bring us really different situations in life, and this is especially seen in the realm of the love life that takes the greatest importance to all of us.

We cannot generalize things, since everything depends on the position in the sign and the house, on other aspects that are also being educated.

Try to use the energy that comes from this aspect that is formed between Venus and Pluto, and use that situation to feel that energy and to understand it while having the courage to share it with others.

This is a connection that speaks of paying the price, and the price with Pluto is really, really high (it is just the question will it bring benefit in the end, or it will bring misery instead).

The uncomfortable aspect of Venus and Pluto, in addition to bringing volcanic passions, is also a great threat to a love relationship – this may be the time to question your love life, and to speak honestly with the thing that has been troubling you deeply.

You will be surprised with the answers, and this is so true in the case when the planet Pluto is the one that ultimately overthrows Venus, whether by the immense jealousy and possessiveness that ultimately kills love and very easily turns into hatred or, in the most extreme situations, can bring about the death of love in the literal sense of the word.