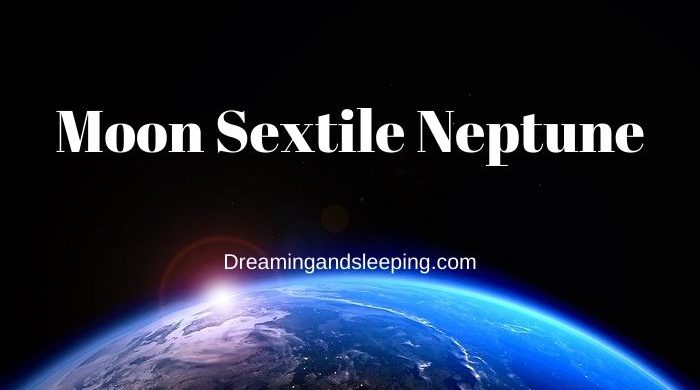 When we come from the idea that the sextile position is the planetary aspect that exists in the natal charts as the representation of a human (personal) inherent capacity to quickly attain certain purposes.

These characters could be realized and could not there is nothing that anyone could guarantee for us, but it is a good thing to know that we have this opportunity in our lives.

What is even more interesting is that the sextile position that occupies 60-degree space between certain planets is the one that somehow in some way attracts the character to try to achieve the goals that are presented to the planets in sextile (so what is played out in front of that person has a real chance to reach it and make a life the best it can be).

Now, we will try to give you some answers about the people and their lives if they have this aspect in their chart that is created between the Moon and the planet Neptune.

But we must say that it is truly important is that you cannot ever take just one aspect and disregard all others. It cannot be done, and always look your natal chart in its totality, but know what the sextile brings.

It is said that when these two planets (we will call the Moon planet also, for the better understanding) in the sextile position is amazing one since we get to see how to regularly strong and well-influencing characters combine. 60-incredible experiences, fulfilled hopes, true dreams, interest in spiritual projects, mysticism, visionary, daydreaming, intellectual connections, little determination for material plans.

These two characters of different groups merge, but here this is the sextile that can be a bit passive and sometimes needs a little boost to show off, but the potential is still present and cannot be deprived.

Because of this, we call sextile an aspect of opportunity and possibility that could be used in some ways, while in some others cannot, and it is all because of the volatile nature of both plants.

But the people who have this position of planets in their chart are besides being too sensitive and easy to impress, their inner imagination is emphatically developed, and this is the spot from which they can grow and develop further in lives. 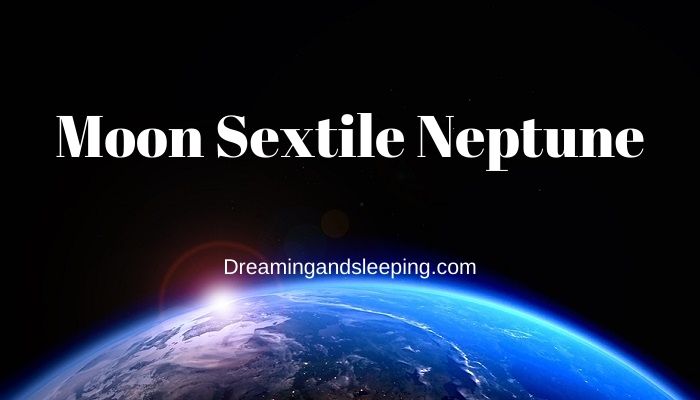 Here, in this specially chosen group, we get to see people with the amazing talent, and somewhat interesting, volatile and tragic destinies.

Astrologers call this planetary aspect the visionary one since we meet the planet Neptune that here brings tremendous creativity that these loving souls carry, so they can also be artists but are certainly very creative, and they do everything in their own way, there is nothing that compares them with others (but themselves, they always doubt their talents).

Also, the Moon there provides the profound spirituality and intuition that sometimes translates into telepathy, think of these persons as those who appear or feel that he or she has already experienced some parts of his / her life.

They are often interested in these topics, and some of them become their career choices.

People who have this aspect have a perception of the world that is truly based on their ability to instinctively grasp all the subtle variations of people in the environment.

Their souls are tender, and their minds are imaginative, all because of the simultaneous impact that comes from the Moon and the planet Neptune that are combined in a sextile “marriage”.

What is even more amazing about their character is that they can succeed in life when they are following some of their inner instinctive radar, which often brings them to the right place at the right time.

Think here about the opportunities that we have mentioned in the previous sections.

Some astrologers say that this sextile aspect could be described as the aspect of mediocrity, which gives a distinct intuition, prophetic inclinations and sometimes clairvoyance – but the problem occurs when these people are solely relying on this and not on their hard work. It cannot pay off always, and in this sense, they cannot stay on the top for a long time.

They also have such an imaginary world developed in their minds that they have dreams that they personally believe that point to future events (but it is not something that creates life, it is more something that could be used as an inspiration, not work).

Another negative trait that is connected to this sextile position is the fact that they are so prone to compassion, we often finds them in a not deserved position, where they do not feel comfortable and where they are thinking more about others and not their work and life.

In emotional relationships, it is a good idea to have a similar attitude and engagement with their partner, especially when it comes to art, or to have similar cultural norms – people who have this sextile position in their natal charts could not bear to be connected with someone emotionally if that person does not have the same system of values as they do.

So, the Moon is here in a favorable aspect with the planet Neptune is one of the aspects that emotionally enrich the personality, enhances the kindness and beauty of these persons. They are very attractive, maybe not in a conventional way, but in a way that their inner beauty is more than obvious.

The sensibility of these persons, as well as their depth of hyper emotionality, have a favorable effect on creativity, often imagination – think of them as lovers who dedicate their art to their lovers.

Look at these people who are blessed with the sensual aspect that gives them pure charisma, without false modesty.

Additionally, pipe with this aspect could be genuinely and deeply in love with a person throughout life, but this love, whatever its outcome in life, will only contribute to the quality and purity of this soul — people who are dreaming and therefore full of different ideas and very imaginative.

Everything in their lives is and will always be connected to the spirituality, and love that is not related to the earthly love, but the one that is beyond It can be their compass in life, that could lead them to glory and success, or that can cost them a lot. Both versions are plausible.

Now, when you know that those who are under this planetary aspect are imaginative, sensitive and tender souls, it is not hard to know that they are the people who find their desired occupation in the realm of art and overall creativity.

This is why (and you can see this in the mentioned in our celebrity example) there are so many artists or at least persons who are fans of art and aesthetics, whether it is a film, dance, poetry

Some who have this aspect in their natal chart are also those who help others through the profession, but also in day-to-day relationships by helping people in their families or young people.

Often, besides their regular professions, they have something on the side, preferably some humanitarian position or they have feeling that they should dedicate some part of their lives to those who are in a worse position then they are.

But, this could be seen in the fact that they never reach their full potential in work, because some others things (do not have to be bad, but they could fall in love and neglect their careers).

Also, we must add that the Moon and Neptune connected in a sextile position is the aspect that encourages spirituality.

People who are volunteers who participate in various social activities often have these aspects.

Knowing that the sextile that is created between the Moon and the planet Neptune is the good aspect that offers great abilities, it can be a medium (when other aspects in a personal chart are a somewhat negative and incompatible one with another).

When this aspect is active in the night sky, this is the time when the dream always connects the dream with thoughts, and its interpretation, so you should try to do the same, to give yourself some answers to the burning questions that you have been neglecting for some time.

This is the aspect that gives such a good spirit, and it could be seen as a protector.

The Moon that is active also here has an affiliation with genetics, the past in some general sense, and it gives the harmonious relationship with it – so think about your past and how it affects you in the present moment.

All of this could be picked out and used in life in one way or the other, and it depends on other things.

So, in the end, what can we say that could be applied to all of us in this world – this is the transit with the presence of tender and passionate feelings in love stickers to determinants that can facilitate the achievement of a better understanding on an intellectual level.

This is the moment that all of us could and should use for the better understanding of another human being that lives beside us, as a neighbor, or a loved one, or maybe a stranger.

However, especially during this transit, even if you do not have it in your natal chart, people should not experiment too much with some untested methods of working on a business-financial plan because of the greater possibility of misjudgment and wrong moves.

Here, in the business world, this is the aspect that could blur the lines, and it is not something that will help you make your future material safe. On the contrary, so be extra careful.