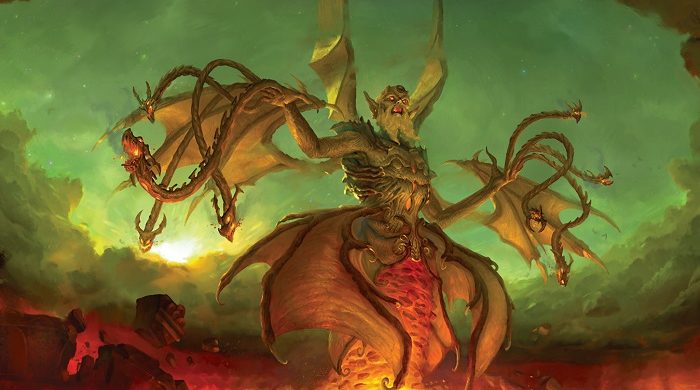 Greek mythology is one of the best known and longest lasting traditions we have in the world.

Whether Greeks had a secret formula which helped them keep their tradition alive over years or simply their stories and myths were incredibly interesting, one thing is for sure and that is the impact of Greek mythology in the world.

Greek gods and deities were divided by their characteristics and almost every natural occurrence and event had its own deity. People used gods to explain things they couldn’t understand and this helped them cope with natural disasters, emotions or even everyday simple struggles like jealousy.

Typhon was a large serpentine monster that belonged to the deadliest animals that existed in that time in Greek mythology. Many Greek writers wrote about Typhon and described the amount of fear people had from this giant creature. Typhon, according to the legend, was a son of Gaia and Tartarus.

Other sources indicate that Typhon was actually a son of Hera alone or even the offspring of Cronus. In stories, Typhon often appears together with Echidna and together they were an inspiration for monsters in almost all fantasy books.

Many legends indicate that Typhon was actually born from the ground or Earth, and that he had no parents. He was born in the period after Zeus defeated the Titans and he was taken care of by Aphrodite. Other stories indicate that his mother was Hera, and that she gave young Phyton to the serpent Phyton to take care of him, who is why Typhon became a serpent himself and fear to every human being.

According to myths, Typhon had a partner and love called Echidna. She was a half woman half snake and she was equally monstrous as Typhon. Together they had created the “fierce-offspring”.

Their offspring were Orthrus, a two headed dog that was the guardian of Geryon and Cerebrus, a multithreaded dog who guarded the gates of Hades. The third child was Lernaean Hydra, who was a multithreaded serpent that had the power to grow two more heads each time someone cut her one head. Some myths mention one more child called Chimera, who had the ability to breathe fire and was part lion part goat and had a snake headed tail.

Myths about Typhon are best known because of the battle that happened between Zeus and Typhon. Typhon challenged Zeus for the rule of the cosmos. According to a famous poem by Homer, Iliad, Zeus struck the ground where Typhon was lying defeated and this is one of the earliest proofs that this battle ended up in Zeus’s favor. 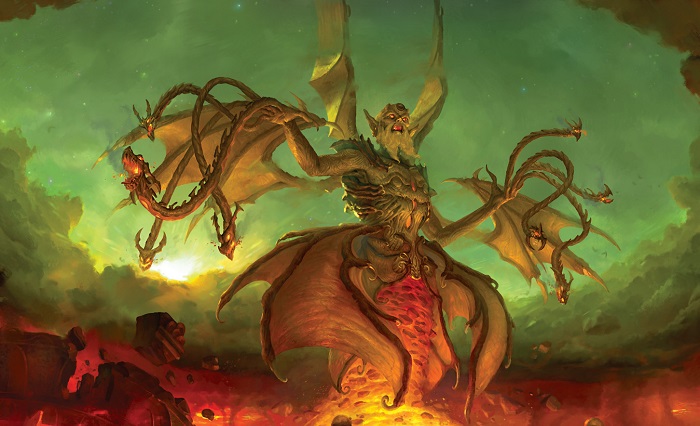 After his defeat, Typhon was casted away to Tartarus by the angry Zeus. In another myth, Typhon went into Zeus’s room while Zeus was sleeping and tried to kill him, but Zeus woke up and killed Typhon with his thunderbolt.

According to old myths and legends, Typhon was buried, after his death, under the great volcano Etna in Sicily.

Other sources indicate that this deity was buried under the volcano of Ischia, which is the largest one on Phlegraean Island in Naples the reason why the volcanoes erupt and kill thousands of people is because this terrifying monster is hidden underneath it.

In another interpretation of old writings, Typhons resting place is Boeotia. This mountain is located near Thebes Typhaonium and the reason why mountain exhalants fire is because Typhon is underneath it.

This mythological creature was most remembered because of its fearful appearance and the horror he used to send upon humans.

The derivation or the base of this name remains to be uncertain. Many related Typhon to wind and he was originally considered to be the god of the wind. Ancient sources indicate that the word “tuphon” or “tuphos” was translated as whirlwind.

According to ancient descriptions, Typhon was an outrageously lawless creature that had an immense power and hundreds of snake heads. The heads could breathe fire and create all sorts of sounds that were used to scare people.

Homes in the Homeric Hymn to Apollo, describes Typhon as a creature not similar to gods or men. Typhon was portrayed as a creature with hundred snake heads, which later became a standard description of this creature in writing.

Chacidian hydria described Typhon as a humanoid from the waist up and with two snake tails at the bottom. This creature had an amazing strength and strange appearance, which made him even terrifying for humans.

Creatures similar to Typhon appear in almost every ancient tradition and mythology. Some of the most famous ones are the Set (Egyptian god of destruction), Baal Sapon (Near East mythological creature) and Python (serpent who was killed by Apollo at Delphi). All of the descriptions of these monsters are similar to the ones we can find on Typhon, but all of them have their own details and differences.

Typhon is also linked to the older generation of descendants of Gais and hey are called Giants. They also challenged Zeus and tried to take over his supremacy over cosmos, but they failed just like Typhon. They were both rebels who tried to end the rule of Zeus once and for all, but as many other myths indicate, Zeus was the ruling and the most powerful god there was in Greece.

Many sources confuse Typhon with the Giants and even call him one of them. Roman mythography Hyginus included Typhon in the list of his Giants and the Roman poet Horace mentions Typhon together with other Giants.

In many stories and myths, Typhon is often called the Father of all monsters because of its immense strength and power. He will definitely be remembered as one of the oldest deities in Greek mythology, which can be concluded by only hearing his name.

As I mentioned at the beginning, Greek gods and deities were divided by their characteristics and almost every natural occurrence and event had its own deity.

People used gods to explain things they couldn’t understand and this helped them cope with natural disasters, emotions or even everyday simple struggles like jealousy.

Typhon was a fearful and monstrous deity that filled human bones with fear. The name Father of all monsters is proof enough of how strong his influence was in that era and how people saw him and his power.

Typhon might have failed in his attempt to become the ruler of cosmos, but his existence inspired so many other stories across the globe. Many traditions and cultures took what Greek mythology created and applied it onto their mythology.

Typhon is just one more example of how strong and powerful the influence of Greek mythology was to the world and how we still can’t help it and we are still afraid by the mere mention of the name Typhon. This mythological creature will forever remain to be the patron of all monsters and a reason for us to be afraid of him.