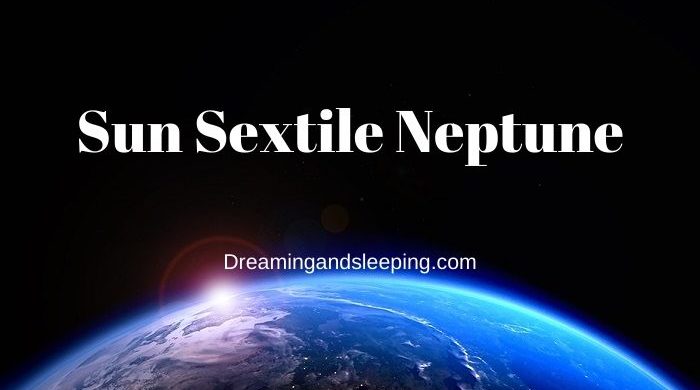 In astrology, the Sun is always a representation of the origin of life because it gives light and warmth; thus this object is responsible for triggering and maintaining the natural cycles on our planet, which affect all living nature, including humans.

So, the Sun is important for the Universe, and for every human being that lives in this world.

In the astrology terms, this is the interesting aspect (the sextile one) That is keeping us going forward with everything that is around us in some balance.

This is such an important to know, the art of balance, and when this balance is in jeopardy, and then everything is in “danger”.

Here, the symbol of the Sun is connected to the planet Neptune that in astrology stands as the symbol of water (the ocean, waters in general) as the source of life on Earth, as it has the capacity to change its aggregate states under the influence of heat.

You can see what an interesting relations heat and water have, or fire and water, but it is clear that these two can work well together, as a complementary relationship that gives birth to many opportunities.

Of course, here, in the positive sextile position, these two planets (we are naming the Sun also the planet, for the easer understanding), are giving the best out of themselves, and the imagination is the word that we associate with it the most, as you will be able to see.

Since the planet Neptune is connected in the natal charts with the imagination, dreams and creativity, and in the lives of those who have this aspect in their charts, there is no firm and the tangible boundary between the reality and fiction.

Of course, this can sound so great, and it could be, but it can go into the other extreme, and if it does, then many problems are on the horizon. 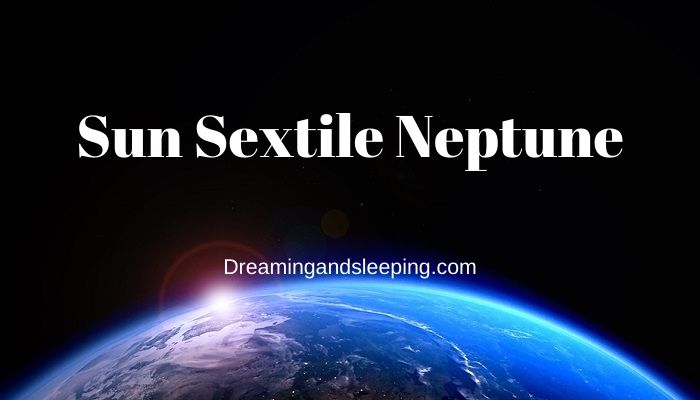 The sextile is an aspect that connects symbolisms of the same duality and enables them to help and support one another in their expression – this is true if the sextile in the natal chart is supported with other aspects.

Here we meet a planetary combination of fiery and watery example which, through their mutual cooperation, leads to the flow of natural energy that supports growth and development.

So, it usually gives much more than it takes away, and most of it could be seen in the realm of emotions and of course a creative work.

Here we meet one tremendous energy since this sextile position that is formed between the Sun and Neptune is in motion that drives the entire living world on our planet since the Sun is in the center of this sextile, and the Neptune is the one that gives it the depth.

The symbolism of this aspect drives our imagination and creativity, and people who are blessed with this aspect have it an abundance of it.

Have in mind that it does not have to be used, but when it is, and then they are extremely successful in what they do.

This is the aspect that helps them move towards the realization of dreams and to recognize and bring something that has been suppressed and hidden in the subconscious to the light of day.

Thanks to this aspect, these people can clearly see all the diversity that is in the world around us, and from it, they are able to create something, to be creative, and to play with all these elements and put them into what will be a reflection of their imagination at work or in life, which will turn dreams into a reality.

Because of creativity and imagination, these people sometimes lead somewhat foggy and fuzzy lives and are driven to “madness” because they want things around them to become clear and visible so that they could see what was hidden before.

It is true that this sextile provides them with the significant life insights, but they take some time before they reach to it, and that road has filled the burden that pressed them, making them lose hope and motivation for a better future.

They can become very depressive and have tremendous problems in all areas of life, and they can become vulnerable and unable to make any self-analysis that will help they understand better.

It is not hard to guess that they are attracted to scene and art in general, but one thing you need to know, outside the scene, these people can be withdrawn and do not like to be constantly in the spotlight.

They can seem a bit mysterious and unfathomable, though they are always essentially positive, cheerful, smiling.

There is something else that hides deep in their souls, and it is up to their lovers, of close friends to discover what lies beneath, and is there anything problematic. If there is, then they are the ones that will help them cure.

All of their creativity and love for the world as it is accompanied by feelings and thoughts, many questions possible that has a purpose make them understand what life and love are, and they can have a problem in discovering these answers.

In them, there is always something that is hidden, and no matter what was previously hidden in their subconscious, which certainly contains a lot of things hidden below the threshold of waking consciousness, after this kind of insight, they usually feel the need to turn their emotions in some kind of a creative act.

For them, love could seem just like a dream, and they want to live their lives as it, a beautiful dream that it will make their lives better, in a creative process.

So, they have the need to speak about it, show it off, or painting it, writing a story about it, turning it into a beautiful melody or giving it shape.

Whoever had a chance being with people who have this aspect in their charts, could feel special because even when this affair is over, they will receive some art piece from their lovers.

If they do not want to fall into something that is chaotic, these people must find their true match, a perfect match for them that will make them as fulfilled and satisfied the one that is able to blend dreams and reality into one.

Because of all this that we have mentioned, people who have a sextile of the Sun with Neptune in their natal horoscope are imaginative and original and capable of turning their dreams into reality – they usually become very successful artists.

These individuals bring enormous energy and a lot of fervor to their creative work, and many of them are involved in stage performances, such as actors or musicians because their energy and spirit are so strong that they can affect and move the masses of people.

More than one occasion, people who have this aspect in their charts are very spiritualized because they necessitate exploring their own depths, which gives them numerous insights about themselves and the world around them, so they can be dedicated to spiritual work, become mystics, but also have a great understanding of the human psyche, so they are humanitarian work close.

Many of them are also attracted to research, exploring not only their own depths but also the depths of the world, but also the Universe itself.

In some way, these people are seen as great visionaries and are able to penetrate future trends, to see to some extent the future – this is so typical when it comes to the people who have active Neptune in their charts.

They need them to be on the move, they love it, and often their work is committed to travels and often attracted to the discovery of new.

You need to know what to do if this sextile is active in the night sky – when it occurs in transits, it is the aspect that gives directives or progressions, you can use it to encourage your creativity, and especially you can use it to gain a clearer view of yourself and what was hidden in your subconscious and what in the past has in a way pressed, distracted, and seemed confused.

The sextile of the Sun with Neptune can give you very deep, useful and fruitful insights that will be a great guideline for improving the quality of your life if you strive to use that energy for a purpose.

On some other way, this is the aspect that does this – whatever we create, it will not go unnoticed, because it will be illuminated by the Sun, and in this case, we bring into our creativity our whole selves, all our energy and our being.

Now is the best time for the creative work, for the expansion of your talents, and there are big chances that everything will go as planned, or even better.

One advice for all us – we should look at these activities to be the ones with the complete originality, a personal note of the author, which gives them the opportunity to be noticed and successful.

In the end, the sextile between the Sun and Neptune is such that it helps us become able to express our deepest emotions (the ones that we did not know are allowed, or that we have suppressed for a long time and now we cannot move any further if we do not resolve it).

This aspect will allow not just those who have this aspect, but to all of us, to be more in balance, to flow, to move us, and to be able to convey what we feel within ourselves to our loved ones so that they can clearly see what we feel about them.