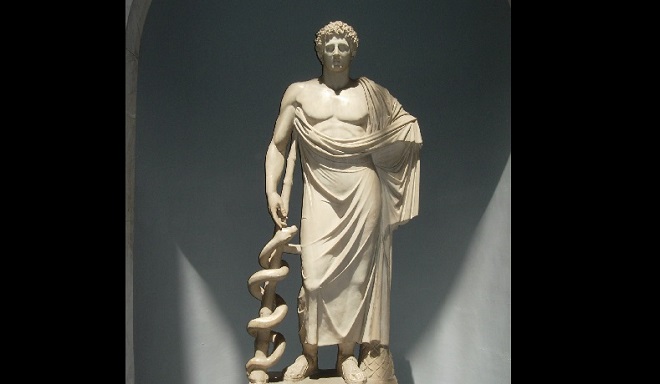 Greek mythology was a product of people’s creative mind, but while reading the stories about gods and deities, we can’t help but wonder if they actually really existed at one point. Greek gods and goddesses protected the people but they also had the power to punish them for their behavior. While most gods in Western tradition are merciful and don’t punish people, Greek gods weren’t the same.

Almost every natural event and happening was marked as the act of god. Every thunder, every rainfall and everything else that happened on earth was linked to power of a certain god. Gods had the power to kill those who weren’t obedient or the ones that in any way protested the will of gods. Gods in ancient Greece were often portrayed with characteristics of people and they had weaknesses just like people have.

In today’s text, we will learn more about the Greek god Asclepius who was the god of medicine, health, cleanliness and recuperation.

Asclepius belongs to one of the better known Greek gods and there are a lot of stories and myths linked to his name. So, if you ever wanted to learn more about this Greek deity, then here is a chance to do that.

Asclepius was a god of medicine and a hero. In Greek religion and mythology, he was often portrayed as a hero and there are many stories linked to his heroism.

Asclepius’s name origin is unknown. In Frisk’s Griechisches etymologisches Wörterbuch, there is an attempt to explain the name origin of Asclepius. The most supported explanation is that the name Asclepius comes from the Pre-Greek proto form *Atyklap-.

According to legends, Asclepius was the son of Apollo. His brother was Eriopis. Asclepius was married to Epione, and he had five daughters with her. His daughters were called Hygieia, Panacea, Iaso, Aglaea and Aceso.

He also had three sons with her called Machaon, Telesphoros and Podaleirios. With Aristodama he had one son called Aratus.

The earliest stories about Asclepius tell that his father was Apollo and that his mother was Coronis, who was a mortal woman. His mother was killed because she was unfaithful to Apollo. To punish her, she was laid after her death to be consumed by others, but the unborn baby was saved from her womb. This baby was the young Asclepius. An alternative story says that his mother died in labor and that she was laid on the pyre to be consumed, but the Apollo came and saved the unborn baby from her womb.

According to other myths, Asclepius was raised by the centaur Chiron. Apollo carried the baby to centaur and the centaur taught him the art of medicine. The myth also says that Asclepis’s ear was licked by a snake, and she taught him everything about medicine. Snakes were sacred to ancient Greeks and they considered them to be the pools of wisdom and healing. Asclepius wore a rod wreathed with a snake, which we now know to be a symbol for medicine in popular culture. There is even a non-venomous snake that lives in the pan-Mediterranean area that was called after Asclepius.

Asclepius became so prominent in healing, that he soon surpassed his father Apollo and his teacher Chiron. He had the ability to bring dead to life and also to save others from a sure death. Some legends suggest that he was killed because of the fact he was too helpful to humans, so Zeus decided to kill him.

He did this to restore the balance on earth that was ruined by Asclepius’s extraordinary healing abilities.

Another myth tells a different story about Asclepius’s death. According to this story, Asclepius died because Zeus killed him after he brought Hippolytus back to life and accepted gold for this deed.

Another myth tells a story about Hades asking his brother Zeus to kill Asclepius, because Hades was afraid no dead souls are going to come to the underworld because Asclepius was resurrecting them.

The death of Asclepius made Apollo angry, so he decided to kill the Cyclops who made thunderbolts for Zeus. Because of this, Zeus suspended Apollo from the night sky and made him serve Admetus, king of Thessaly for the period of one year.

Zeus later brought Apollo back and revived the Cyclopes that made him his thunderbolts, and also placed Asclepius’s body up in the stars and made a constellation called Ophiuchus (or the Serpent Holder). Alternative stories suggest that Asclepius was later resurrected by Zeus, but he instructed him not to revive anyone without his permission.

His mother was a mortal woman called Coronis. Asclepius belonged to one of the more influential Greek deities and his powers were solely directed to helping humans.

At one point, he healed and resurrected so many people, that according to a myth, he was killed by Zeus. Asclepius was creating an imbalance in the world by saving too many people from certain death. Asclepius’s name origin is unknown, because there wasn’t too much evidence of the origin of his name.

According to stories, Asclepius died because he was killed by Zeus and some state that he was later resurrected by Zeus himself. The most famous Temples to Asclepius were built in north-eastern Peloponnese and they date back to fourth century BC. The temple to Asclepius was also built a century later in the island of Kos, and the Hippocrates was the legendary father of medicine who began his life on this island.

From the fifth century BC, the cult of Asclepius began existing and it grew very popular. Pilgrims flocked to the healing temples of Asclepius and they would often perform healing rituals and offered sacrifices to god. Dreams about Asclepius were immediately reported to the priests and some healing temples used healing dogs to heal their wounds. To honor the God Asclepius, non-venomous snake was often used in rituals and snakes would slither freely across the temple floor.

The Hippocratic Oath, that is now being sworn by all the doctors around the world, used to begin with the words that honored Apollo and Asclepius. Asclepius’s image was also depicted on the reverse side of the Greek 10,000 drachmas banknote from 1995-2001.

Asclepius supposedly met a snake that licked his ears clean and told him the secrets of healing. This is why Asclepius is often portrayed with a snake wreathed around a rod that he usually carried around. This symbol is the symbol of medicine and healing across the world, and a symbol that is well-known in almost every part of the globe.

Many aren’t aware that this Greek deity influenced such an important symbol that we all know and recognize, because his existence was shadowed by the later works and deeds of Hippocrates. Asclepius was mentioned in the Homer’s Iliad as a skillful physician and as the father of two Greek doctors called Troy, Podalirius and Machaon. Many Greeks honored Asclepius and considered him to be a hero.

He had the ability to cure people and save them from death, and they believed that sleeping in his temples was enough to make them get better.

Asclepius was usually portrayed standing, holding a rod wreathed with a snake and dressed in a long cloak. He often has bare breasts in paintings and as a sculpture. Many interpreted the rod of Asclepius as a message that told them how to heal the dracunaculiasis or the Gunie worm disease. Many organizations around the world use Asclepius’s rod as their logo, and some of them include Beijing University of Chinese Medicine, International Medical University Malaysia and Medical Counsel of India.

All of these organizations have the Asclepius’s rod and snake wreathed around it as their symbol, which only speaks about the importance and influence of this Greek deity on popular culture.

Greek mythology was a product of people’s creative mind, but while reading the stories about gods and deities, we can’t help but wonder if they actually really existed at one point.

Greek gods and goddesses protected the people but they also had the power to punish them for their behavior.

Asclepius’s work might have been shadowed by the later work of Hippocrates, but he was still remembered as a hero and a highly influential deity.

Asclepius was the Greek god of medicine, healing and resurrection and the stories surrounding his life are incorporated in many myths. Asclepius’s life and death were remembered, particularly because he was killed for his ability to help humans.

His talent was something that would have save every human being from death, but eventually, this talent wasn’t something accepted by the ruling gods. Asclepius will be remembered as the god of medicine and healing, and his influence on popular culture is highly present.