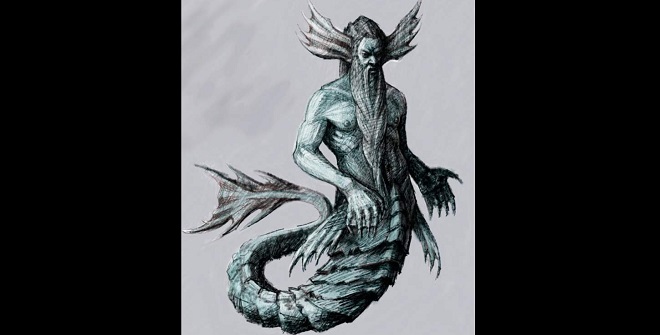 Greek gods were created by human minds but some of the myths linked to them are so realistic and interesting to be excluded as fake.

Greek mythology is one of the most influential and highly respected mythologies on earth, because it made such an impact on the people like no other belief. Names of Greek gods and goddesses were used as names to a lot of important events, objects and discoveries made by humans.

When we think about Greek gods, it is difficult not to think about Greek myths and stories that mostly used Greek gods and goddesses as their main characters. Their lives were so known to humans, that almost everyone understood everything about their gods.

Gods and goddesses of Greece were shields and patrons of all things that people did and all natural events we experienced. From their will and power, everything depended and this is one of the reasons why humans showed them such great respect.

In today’s text, we will talk about the Greek god Nereus, who was the god of the sea. Nereus belongs to one of the smaller deities, and his presence in Greek mythology is not significant, but he still made an impact for all future characters. So, if you ever wanted to learn more about this deity, here is your opportunity.

Nereus was the son of Pontus and Gais. Pontus was ruler of the sea while Gaia was the ruler of earth. Gaia also had children Nereids and Nerites with Doris, and Nereus lives or spent his childhood with his siblings in the Aegean Sea.

The name Nereus is probably Pre-Greek in origin, since there is no evidence of the origin of the name Nereus.

Nereus lived deep under the sea and was never seen by human eyes. He was only portrayed as a presence or force that can’t be seen by bare eyes, and people believed in his existence because of his deeds and help he provided to them when they needed him the most.

According to most myths, Nereus helped heroes at sea and protected them from the dangers that were lurking from everywhere. He aided heroes like Heracles and many others, on their trips over the sea.

Nereus and Proteus were two manifestations of gods of the sea who were supplanted by Poseidon after Zeus chased away Cronus. Some poets link Nereus to labors of Heracles, and that was concluded by the use of Apollonium of Rhodes and old scholion.

In the fifth century, Nereus was replaced by Triton who never appeared in Homer. Triton supposedly had problems with Heracles and restrained him in order to deliver the information that was valuable. In the later mentioning, Nereus appears in the story about Alexander the Great, where after the climactic battle of Issus, army resorted to prayers to Nereus, Thetis and Nereids.

In most cases, Nereus was mentioned as a symbol for virtue and truthfulness and people looked up to him for protection and guidance.

In the Aelian’s natural history, Nereus was mentioned as the watery consort of Aphrodite, who had the ability to transform into a shellfish with a spiral shell that was extremely beautiful.

Nereus was the father of Thetis, who was one of the Nereids, who was the mother of one of the Greeks biggest heroes Achilles and Amphitrite who later married Poseidon.

Some myths indicate that Nereus was the teacher of Aphrodite and that she learned everything she knew from him.

Nereus was certainly a symbol of kindness and mercy and his appearance in most of the myths is seen as salvation.

He offered help to those who got stranded on shores or who got lost at the sea. Nereus wasn’t one of the most famous Greek deities, but his existence certainly marked the existence of many other Greek deities.

Nereus was the Greek god of the sea and he was often referred to as the Old Man of the Sea. Nereus was famous for helping heroes get by at the sea and provided them help whenever they needed it. Nereus often appears in prayers that sailors but also all others used to direct to him, to ask for his help.

Nereus was remembered as a merciful god who helped people, and he had no negative events stuck to his name like some other, possibly even more famous, Greek gods.

Nereus was the son of Pontus and Gaia. His parents had two more children, and Nereus spend almost all of his life with them. His children later became more prominent and known in Greek mythology, and Nereus was often mentioned as the father of grandfather of some of the great heroes of Greece.

In art, Nereus was often portrayed surrounded by water and water elements. In some myths, he supposedly had the ability to transform into a shell and in others he was the consort of great goddess Aphrodite.

Nereus’s name is often mentioned in link to some other famous creatures and characters in Greek mythology, while his life was mostly unknown. Nereus is often painted on vases and other objects, as the divine spectator.

This means his presence was always there but people couldn’t see him with their eyes. He made sure that everyone was protected at sea and that no danger is threatening anyone who was on the open ocean.

The Greek name Nereus’s origin is unknown and some suspect the name Nereus is of Pre-Greek origin. In popular culture Nereus is often used as a name for various spots on our planet, as the name mentioned in books and movies.

The largest Mediterranean cave was named Nereo Cave, in honor of this Greek deity. The deepest diving underwater ROV was also named after Nereus.

In Percy Jackson’s Titan’s Curse, Nereus was shown as a homeless old man who is also called Santa’s evil twin.

All of these mentioning, with few exceptions,  are of course far away from the respected position that Nereus once had in ancient Greece.

He was known as the Old Man of the Sea and his significance to Greeks was large, primarily because the sea and sailing was one of the biggest parts of culture and economy of Greece. This deity became the patron of all sailors and their protection on the forever restless sea.

When we think about Greek gods, it is difficult not to think about Greek myths and stories that mostly used Greek gods and goddesses as their main characters. Their lives were so known to humans, that almost everyone understood everything about their gods.

Greek mythology is one of the most influential and highly respected mythologies on earth, because it made such an impact on the people like no other belief. Names of Greek gods and goddesses were used as names to a lot of important events, objects and discoveries made by humans.

Nereus wasn’t the best known deity there was in Greek mythology, but this doesn’t diminish his importance in Greek mythology overall. This Greek deity was known as the Old Man of the Sea, and many believe that his existence comes from the Pre-Greek period. Even his name is the proof of that.

Nereus was a part of prayers, sailors used to send to him when they got lost at the sea or when they were endangered by some other dangers. Nereus’s existence is often associated with some other important figures from Greek mythology, which only adds up to his importance. Nereus’s name is often used in popular culture as well, and many sea related regions and areas are named after this Greek deity.