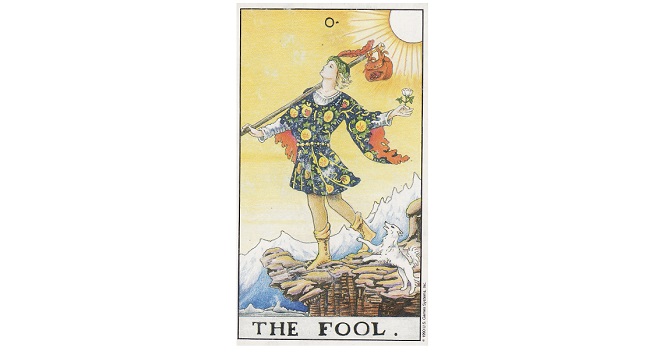 For many tarot readers, especially for those who are not experienced, it is very hard to interpret what the Fool tarot card can mean. When they have to read this card, they usually have difficulties.

Of course, there are many tarot books in which you can read about the meaning of the Fool tarot card, but in this article we will try to give you interesting information about this card. We will help you understand the meaning and symbolism of this card, so you will be able to read it without problems.

Even though it is considered that The Fool is the first tarot card, we can say that The Fool doesn’t belong to this order of cards. Sometimes the Fool can also appear at the end of the tarot cards.  It is believed that this card is a symbol of ourselves and our own lives.

In most cases the Fool tarot card is usually represented in the form of a young man who has unlimited potential, so this card doesn’t need to have any number. This young man is standing at the cliff edge, which means that he is in danger. He may fall into the material world, but he may not be prepared for it.

Sometimes the Fool tarot card is represented by a women, but in most cases it is a man. He is usually dressed in bright colors and he has always a stick with the bag hanging on it. In this bag there are the most important things for the young man that have special symbolism, but about that you will read later. The white rose is placed in the left hand of this young man.

What is interesting to see is that the young man is not aware of the danger around him. We have already said that his feet are placed at the edge of a cliff, but he doesn’t realize the danger. He looks self-confident and there is a small dog beside him, who is trying to attract the attention of the Fool.

In the Fool tarot card we can also see the sun, but in the background there are mountains with snow.

Interpretation of the Fool Tarot Card

In the Major Arcana The Fool has 0 as his number. On his journey the Fool will experience many good and bad things that are happenning to us in our everyday’s life. He has to go through many phases in life, which is completely normal for every human being. The Fool is someone who wants to experience something new, but he is expecting nothing special.

He has also no experience, so we can say that in each sense the Fool is represented as the zero. At this moment he is nothing, but he has a great potential to become everything. We can also say that the Fool is a symbol of youth, innocence and joy.

When it comes to the interpretation of the Fool card, we have to say that it is sometimes regarded as a symbol of something impulsive and foolish. Some readers of tarot cards define the Fool tarot card as a possible self-destruction.

The young man has placed his feet at the edge of the cliff, which may be a big danger and risk for him. But we don’t know what is under the cliff. It may be the bushes that would soften his fall and prevent injuries.

Having that in mind, we can say that something what seems as a big threat or risk to us, may be completely safe.

It is also important to try to explain what the dog on this card represents. It is known that dog is the best friend of a man and he is represented as his guardian. In this tarot card the dog is probably trying to warn a young man of a danger or dog may be having a fun only. It may happen that the dog is also not aware of the danger and he is ready to go with his master everywhere.

We have mentioned that the white rose is placed in the left hand of this young man. It is important to explain the symbolism of the rose. It is believed that it symbolizes something pure and innocent. The clothes of the young man are bright and there are many interesting symbols on his clothes. Many tarot readers love to interpret these symbols.

The mountains with the snow that are placed in the background of the Fool tarot card are a symbol of the spiritual world that the young man has left. Now he will have to face with the material world and all troubles and problems that exist there.

Now when you know someting about the interpretation of the Fool tarot card, we will tell you something more about its symbolism. We will try to explain you the deeper meanings of this card, so you will be able to understand what it actually symbolizes.

You have seen how the Fool tarot card looks like and how we can interpret it, but you have to know what all the symbols on this card mean. Actually, we have to say what this card represents in general.

Upright Fool Meaning. The upright Fool tarot card is a symbol of a great potential, innocence and new beginnings. If you have this tarot card, it means that you have unlimited potential in yourself and the whole life is in front of you. It is the time for new beginnings and adventures.

The Fool tarot card actually symbolizes that you have to start using your creativity and thinking of your own goals in life.

Everything in this world is possible and you just have to believe in it. There are many opportunities in front of you and you have to use them the best you can. You should know that the life of the Fool has no worries and problems.

He is relaxed and he has chosen a new journey for himself. It means that if something in your life doesn’t go well, you should choose another journey and believe that everything will be fine. You have to be wise and to believe in yourself as well.

The Fool tarot card will encourage you to follow your own heart and to have faith in yourself. It is important to know that the Fool is always represented without any fear. He is ready to take any risks and to try something new. He doesn’t know what is expecting him in the future, but he goes forward and he believes in himself.

You have to believe that you can do everything and you have to enjoy life as much as you can. The Fool tarot card is reminding you not to miss any opportunity that may appear on your way.

We have already mentioned that the Fool is like a zero, because he has no experience, no expectations and no past. He is not conscious of himself and he needs to learn many things in life. The symbolism of the Fool tarot card is usually related to pure energy. The fool doesn’t have an ego and he doesn’t have opinions about anything.

That’s why he has to become aware of many things around him and to experience something. On his journey the Fool will meet different archetypes which will certainly have a certain influence on him and his spiritual development.

As you can see, the Fool himself doesn’t have any meaning, so it is not possible to interpret this card on its own. The only way to give the interpretation of this card is when the Fool appears together with other cards and in specific situations. If other Major Arcana archetypes appear together with the Fool, they will have an influence on him, as we have already said above.

Reversed Fool Meaning. Also it is important to know what it means when we have the Fool tarot card reversed. In this case it means that the Fool has done something stupid and he has to wait before he does anything else.

If you have the reversed Fool tarot card in front of you, it means that you have to stop doing the things that you are doing right now. You have to wait before you make a decision and do something more. You have tried to do something but in a wrong way, so you were acting like a real fool. That’s why it would be better to stop. If someone is reading the Tarot cards for you and you have the Fool reversed card, it can be associated with your work place.

As you have seen in this article, the Fool tarot card is the most special of all tarot cards, because its number is 0. It means that this card may be considered both as the first or the last tarot card, so it doesn’t need to have any special number. We have told you that the Fool tarot card symbolizes youth and innocence and we have described how this card looks like.

We have said that there is a young man who is standing at the edge of the cliff, so he may be in a danger, but he is not aware of it. Some tarot readers say that this young man may be very naive, too.

We have also said that there is the upright Fool meaning and also the reversed Fool meaning, so we have explained the difference between these two positions of the card. We hope that this article has been useful for you and that you have enjoyed reading the symbolism of the Fool tarot card.

Also, we are sure that now you will be able to read this card on your own and to understand its meaning and symbolism.