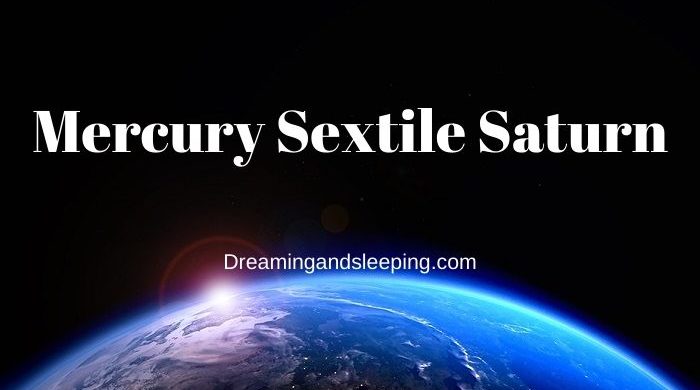 It is said that the sextile is the aspect that connects us with the light, because –  we can see that it is certainly a part derived from two sextiles, that is, the second part, which now connects us to the part that is attached to feelings.

We have a reason, on the one hand, that we get over the aspect of the sextile by connecting the 1st and 3rd signs, and we have the feeling factor that we also get from the sextile.

Here, the two planets that are connected into the sextile position are planets Mercury and Saturn, in some general way, this aspect speaks always talk about mental stability and strong character.

Persons who have an aspect of these two planets in the natal horoscope generally have a strong intellectual capacity and an excellent memory.

Like we always say, these are just aspects that could be used.

Read more about them, or if you have such an aspect in your natal chart, you could find some useful advice for your personal development.

To look at some general characteristics of this aspect, we must say that since they are blessed with the amazing intellect and memory, it is not an easy task to persuade them and force them to change their thinking, because they are known for their rigid character and unchanging personal opinions and conclusions.

And here, we are saying this in a good way, not in a bad one – they find their way to success is to ask and find proof and fact in everything because they cannot believe otherwise.

But when, for example, people find their place in their lives, and prove that they are worthy; in that case, they stay loyal till the end. 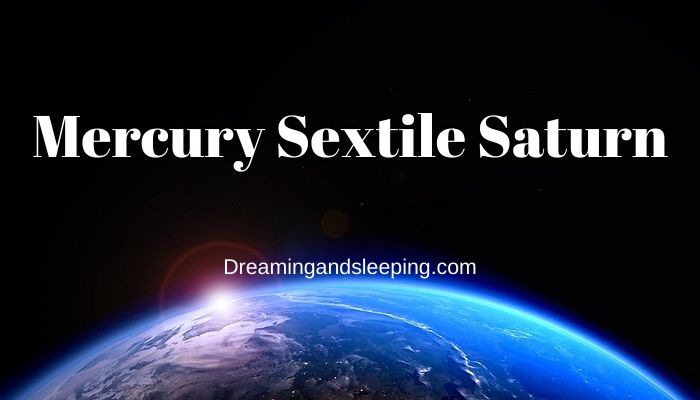 They can learn the most complicated things in life, but at the same time, they can be simple and joyful that is unbelievable that they are the same person.

Maybe in the first glance, it is hard to believe that all of them have anything in common, but they do, so take a look at their biographies to look for the similarities that the sextile between Mercury and Saturn brings.

These people have a practical nature and are not inclined towards an abstract way of thinking because they seek to materialize and realize their vision or idea in the physical sense. To believe and to enjoy, they need to touch and feel with their “senses”, and there is no other way they could work.

They are extremely precise and meticulous in everything they do – and are willing to check the already completed jobs for hours in order to minimize possible mistakes, that is, to do everything perfectly.

They have that inner need to find perfection in everything they do, and for others, this could be seen as a divine and an amazing job in the world, and for them even tedious, but very fulfilling task.

The aspect of Mercury and Saturn gives people who have it in their natal charts a strategic and mathematical mind, the tendency to have everything prepared and well calculated in their head because the background of this aspect conceals great fear and discomfort from everything unforeseen and sudden.

These people leave nothing to chance, and their primary goal is to master the situation or the problem because, for them, this is the only way to realize their plans successfully.

All of this that we have said in the previous section could have its downside – they can shy away from everything that is funny and relaxing, from any unplanned situation, just for the sake that they avoid something bad from happening. These thoughts can drive them crazy and are borderline obsessive.

It is characteristic that these persons with the sextile positioned in the Mercury and Saturn to have a methodical and systematic way of thinking and such an approach to things in life – maybe some will say that these people have a somewhat too serious mind, but they also emphasize skepticism and pessimistic worldviews.

This is the aspect that is very problematic – they look at the world from such a pessimistic point of view that is even wonder how they get up in the morning every day.

They are not inclined to take risks and give themselves to some “higher power” because they want to hold the strings in their hands and create their own lives.

This idea also leads to something that is called an illusion, and they restrict their lives from any unexpected joy.

In interpersonal contacts, they can act distant and overly cautious; they take a lot of things with reserve, which in the eyes of the person who looks at them from the outside may seem like a lack of optimism and positive energy.

On the other hand, their mental stability and rational thinking are most noticeable in troublesome and tragic moments.

But, we will not be depressive till the end, they can and are perfectly able to pull themselves from such states.

The thing that attracts lovers to those who have this sextile in their natal charts is the fact that even in troubled times, these people are able to remain fully supported and with stable feet on the ground, which allows them to respond adequately, and at the right moment, avoiding indulgence in panic and being completely blocked in stressful events.

For spouses and long-term lovers, those who must be present in your life to love and take care of you, these people are a true treasure.

Maybe they lack some spontaneous behaviors, but they have so much to give, only if their lovers know how to appreciate it.

Often, these people, because of the strong sextile that is formed between Mercury and Saturn can bring a strong connection with the past, so often these persons are attached to space, old objects and gifts, but also long-gone lovers because for them memories occupy an important place in everyday life.

They sometimes could not move on in their lives, because they are too attached to their past and “should be forgotten” lovers.

But, in the best-case scenario, these people have the ability to make the most of the lessons learned from previous experiences, otherwise, and with the unfavorable aspects, they very easily remain trapped in old habits and wrong behaviors.

This implies to love also, and maybe in the worst possible case – they must learn to be open to the new experiences in love area of life.

They are not difficult interlocutors, although at first, they may seem reserved and uninterested, as time goes on, they slowly gain confidence in others, which encourages them to open up and build quality friendships and collaborations.

They usually do not have a wide circle of friends around, because they seek true values ​​in people, relationships that last and grow stronger over time.

These are loyal people, and when they have an idea they will work so hard before they can make that idea work, and what is even more important is that they are always ready to put their backs behind dear people and help in the most difficult times.

With this aspect, humans who have them in their natal charts, they are good organizers, much wiser, more serious, disciplined in thought but also in communication, great for planning, serious topics, thoughts and conversations, great for business.

If you want to have a person in your company that you can lean on, hire someone who has sextile in this position between Saturn and Mercury. Here Saturn can “cool heads” a bit, and it brings a more calm, serious, responsible, and truthful.

They know how to communicate well, and in everything they do, they add a touch of diplomacy, harmony, compromise. These people are well-respected in their work environments. They easily acquire knowledge, but they are also able to put it into practice.

These are hardworking and dedicated people, ready to learn and build on their knowledge while alive. They tend to be self-taught ways of learning and exploring, and they are so dedicated to their work that their pursuit of perfection is beyond compare.

From everything you give to them, they will make a masterpiece, and they live for the recognition for their work, and that no one will ever be able to copy their work.

They can be too depressed and tied to the past, but still know how to make the best of it, as they learn from their mistakes and past experiences.

If they have made a mistake in their past, be sure that is a one-time thing, and that will never happen again.

The sextile aspects of these two planets -Mercury and Saturn are great, and those who have this aspect in their charts are considered to be extremely favorable.

People with these aspects are of a stable nature, of a strong character and intellect.

On a global level, when this aspect is very active, you should use it since it brings the combination of action, self-discipline and perseverance.

Those who work in this way are much more persistent than usual and can achieve anything you plan to do, thanks to organized and systematic activities.

So, you should also plan your future goals and get started today. This sextile invests its energy, and it provides strategy, thus creating a path to the goal.

Willpower, concentration, could be a part of your life, and just like those who have this sextile active, you can be tireless and happy to take the job, and success is achieved through unusual efforts.

This transit is also useful for the education and implementation of previously defined action plans as it contributes to goal invariability through thoughtfulness and discernment.

It does not bring mere happiness but promises results only on the basis of effort and the right attitude towards one’s own abilities and endeavors.

During its activity, for people, it will be so easy to perform routine tasks that will ensure satisfaction and the fulfillment of all obligations that they have been dedicated.

This is especially true in the work environment, and not only your colleagues but bosses will appreciate the sense of responsibility and the way of working since this is the aspect that helps people to be more and more concentrated (maybe more than in any other aspect).

So, the advice is that ensure that projects that require perseverance are under good control as people are able to focus their energy on achieving the goal.

Maybe one thing that you must be aware of one thing, and that is to know what moderation is – look at it as just another line of this aspect that others will appreciate.

If you can do all of these things, then this aspect can lead you to many successes, even if they are not immediately visible, which will not bother you if you are a very patient person and believe that you will later reap the benefits of your commitment.

Always have one thing in mind – success and power that this aspect brings can last for a long time, and it is not something that could be achieved or ruined overnight.