Out of all animals in the world, there hasn’t been a stronger symbolism than the one linked to snakes. They have been portrayed both as good and bad, and their presence in ancient drawings and scriptures has been around for a very long time.

Snakes are present as symbols in all cultures in the world. In some they are portrayed as powerful and mystical while in others they are a symbol of evil and darkness. Their unique appearance makes them stand out from all of the other reptiles.

They have long bodies and their skin is covered with scales. They move by making an S-shaped movement and we can find them on almost every continent in the world.

Another interesting fact about snakes is that they shed their skins after the outside becomes damaged and dry. This characteristic has often been portrayed by people as a power of regeneration and eternity.

In the modern society, snakes are almost always bad characters. They trick and deceive people and make them do and believe things that are in the core of it, evil. They are portrayed as devilish and cunning, with a clear goal to make trouble wherever they go.

In this article we will look at some of the most common snake symbolism and meaning behind it. We will also look at some interesting facts about snakes and how has this animal been seen in different cultures.

Dangerous – Snakes are extremely dangerous reptile. This goes both for humans and for other animals too. Their main goal is to survive and protect themselves, and in order to do that, they need to be extremely aggressive and territorial. They have a lot of natural predators, mainly because of their size. Their biggest predators are birds, since they have a big advantage over this “down to earth” reptile, looking at them from the sky.

Sneaky – Snakes are very sneaky and they need to be in order to survive. They can hide so well, that not even their sharp-eyed predators are able to see them. They also use this tactic to attack their prey from ambush. To capture prey, snakes set up an ambush and when their prey is caught off guard snakes attack with enormous force.

Strength – Even though they are small, snakes are extremely strong if we take their hard grip in consideration. With their body, snakes can strangle their prey and break almost every bone in their body. This is why the deadly grip of an anaconda can easily kill a human. 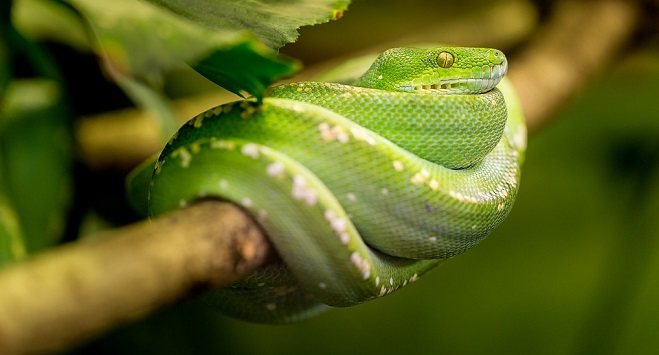 Resilient – Snakes can survive almost every climate, but we don’t come across them in cold weather as much. They are better off in the desert sand and dunes and in rain forests inside deep waters of swamps. Snakes are probably the most resilient creatures in deserts. They can survive a long time without food and water so this makes them a perfect candidate for these dry areas.

Fast – Since they don’t have limbs, snakes are forced to move by using their body. They make an S-shaped movement and some would think that this makes them slow. Quite the contrary, snakes are very fast especially when they need to catch prey. They are aware of the fact that a chance for feeding doesn’t come easily, so they always give all they got to catch whatever they are after.

Snake as a totem

Snakes are often portrayed as evil and deceitful. This representation goes back to ancient cultures as well as more recent ones, and they all have something in common and that is a deeply grounded fear and disgust towards snakes.

Now that we know more about these mystique creatures, we will look on how these traits can reflect a person born under a snake totem or a person whose spiritual animal is a snake.

People born under this totem are very down to earth and grounded. They don’t live in the imaginary world full of dreams. They know what they want in life and their main goal is to succeed at whatever they imagine.

They love spending time in the nature and cherishing the gifts they have received from the Mother Earth. You will often find them gardening and taking care of plants and flowers.

They are calm people who only attack if that is their only option in life. Snake totem is also a sign of wisdom and guidance. You can ask these people about anything and you will surely get a wise and profound opinion from them.

These people often change themselves and their habits. They are shape shifters who don’t like spending too much time in one place. This makes them melancholic and depressed, and as soon as they notice that change is necessary, they won’t hesitate to make it.

They change things in their life, drastically, and make new plans as they go along. They are also very flexible, so they can get into every social group pretty easily and make new friends while doing that. Their senses are far more developed than by others and they can make their lives easier by trusting their gut.

They have a good sense of how the world functions, so their experiences and knowledge, gained along the way, is most precious to them. It is not unusual to find people born under this totem, who have experiences out of this world and their senses are more prone to these signals that are coming from somewhere we can’t explain.

Snakes are also a symbol for healing and regeneration. They shed their skins and change their appearance, in order to survive and stay on their paths. This is a symbol of personal growth and metamorphosis, that people born under this totem experience.

People born under this totem are also very resilient so that they can survive almost every problem they encounter in their lives. They know how to trust their senses and how to cope with death that is, probably, one of the biggest fears every one of us has.

Snakes have often been used as symbols of healing and medication. This is why people born under this totem might be working as doctors, biologists or pharmacists. They are interested very much in the nature’s ability to heal people and in the importance of a good balance with the nature around us.

Snake as a symbol in a dream is a sign of suppressed feelings and thoughts we have forgotten about. They are deeply torturing us but everyday life has moved us away from these troubles and made us forget about them.

There are various explanations of a dream about a snake. This all depends on the situation you have dreamed about and how was your relationship towards the snake. If the snake inside your dream has bitten you, then you are exposed to a toxic situation or person.

Snakes in our dreams can also represent our enemies, especially if there were a lot of snakes around us and we felt fear watching them in our dream.

One of the well-known symbolic uses of the snake image was in the Bible. We all know the story about a snake that lured Eve to eat the apple from the Tree of Knowledge of Good and Evil, which made God angry with people. Since then, people live outside the Garden of Eden and they know grief, sorrow, pain and suffering.

This representation of a snake in the Bible has sunken deeply into our consciousness and made us feel extreme resistance to snakes. Feel of fear and disgust with these creatures has, somewhat, faded over the years but they are still not the most beloved creatures on Earth.

In the Celtic culture, Shamans who have studied animals and nature, worshiped snakes for their power and used them often as symbols. Snakes were symbols of safe travel, healing and transformation. Celts believed that while snake was shedding its skin, her eyes would glaze over, and that in this precise moment, snake would be gathering all of the knowledge and wisdom of the world.

In Chinese culture, snake is represented through a Zodiac sign in Chinese astrology. Snakes represent shrewdness, in-sync behavior with nature, insightfulness and charm. People born under this sign are wise and well spoken. They are good with finances and business. They are born entrepreneurs who will do anything in order to succeed in their plans.

These people are not only interested in materialistic things and they value other people greatly. They have empathy for others and they are not hesitant to give out advice for those in need.

Some tribes still worship snakes as their totems and make prayers for health and well-being of their families and tribe members. In the dry desert areas of North America, snakes were symbols of the rain and therefore highly worshiped creatures.

Aztecs also worshiped snakes and many of their gods had snake-like appearance. Quetzalcoatl god had a snake appearance and it was a god that brought calendar, corn and books for humankind.

In Greek mythology, Minoan Snake Goddess was the goddess of wisdom and in some ancient stories, snakes ruled the world. They also worshiped the Egyptian cobra goddess Wadjet. Probably the more common myth is the one of Medusa, a vicious monster with poisonous snakes as her hair.

In Egyptian mythology, snake opens and ends the first written cultural record. Many gods and goddesses were represented through the image of a snake and they were protectors and patrons of the country. Goddess Wadjet was the first known oracle and she wore the crown of Egypt and never lost her high position in the pantheon of Egypt.

In Nordic mythology, sea serpents attacked sailors and destroyed their vessels, while they went into battles.

Snakes were often portrayed as dragons or their images have often been mixed and interchanged, so that we can now easily say that dragons were actually made using the appearance of a snake. Snakes venomous bite is represented through dragon’s fire spitting ability.

In modern history, you have probably noticed snake symbol on a Star of Life, a symbol for medicine and healing. This symbolism of a snake was well-known before, but it is now being applied to modern era as well.