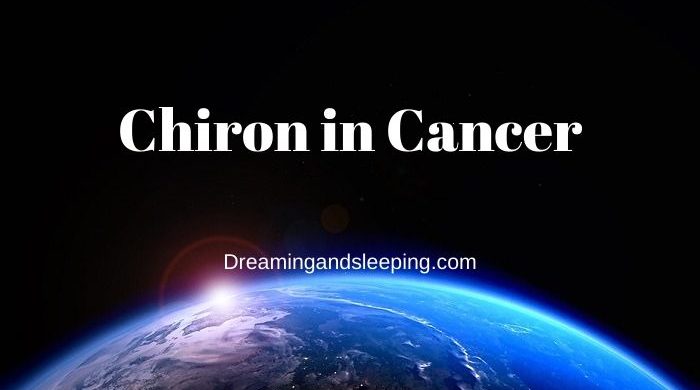 The place where the most vulnerable are the planet Chiron in the fourth field, or analogously in the sign of Cancer, where their Achilles heel is, is precisely the place that sheds light on relationships in the family.

Chiron may or may not be perceived as wounded and injured in the life of these persons or, in some important respect, inadequate. The relationship itself in the natus family itself, and when it comes to early youth, may have been fraught with conflict.

There are various issues when it comes to family relations and they all more or less point to a vague relationship in most cases with the father, though neither mother has been neglected, and even more, she plays a significant role in developing the ambition of the person with Chiron in the fourth field, or is very active in participating in the life or career of the natus.

I will make the difference in that in the male horoscope the fourth field indicates the mother, and in the female father.

In both cases, Chiron’s actions are usually manifested in such a way that, if the relations with the father are in any way disrupted, the mother becomes a great support and by her influence suggestively acts on the natus, assuring him that they will succeed anyway.

One of the problems that Chiron carries in the fourth field is the rather pronounced tendency to fall in love with unattainable people, or it happens that somehow, in order to meet the unmet needs of parents or one of them, natus is strongly tied to a partner.

Whether these persons’ attitude towards the father is idealized or despicable, they are unconsciously somehow attached to him or perhaps the father becomes a God who must obey them in some way.

Often this is why these people have a problem and are fighting fierce battles to avoid identifying with the characters that were mostly intended or planned by their father.

This is not a rare case, nor is it now in our society, regardless of contemporary trends and aspirations of the society itself. In this case, parents determine what you or your partner should or should not be like. 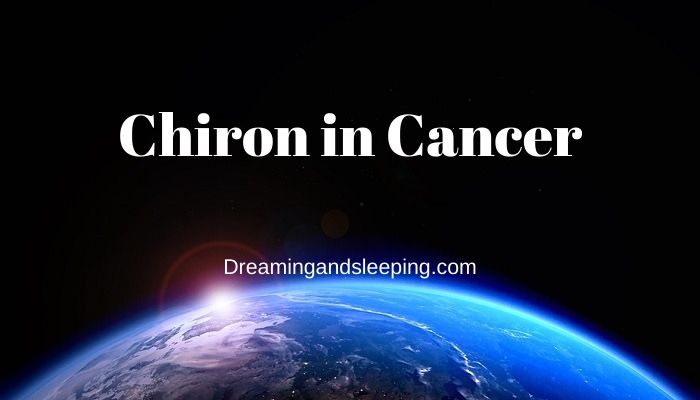 The consequence of this is that it is very difficult and almost risky, and with fear of rejection, the acceptable thought not to consent to eternal obedience. The solution is that these people have to step out of the scheme once, whatever it is.

Unless they break away from the scheme, through life they will always have to look for someone you will be. Who will flatter them and who will seduce them, and if they do not, they will become at least arrogant.

People with Chiron in the fourth field have a constant need for home, belonging and security. They look for roots in the soul and feel like exiles and homeless people in the eternal pursuit of belonging.

They are often hypersensitive, sensitive to the suffering of others who wholeheartedly and emotionally support and accept when their souls and emotions are hurt.

They have a constant need to be needed. They do not allow others to be independent and leave easily or almost no role as comforter and caregiver.

This often does not end the way they intended, because the moment they feel that their good intentions are on the way to being abused, these individuals become emphatically common and stubborn. They have difficulty in both emotional and physical eating.

Chiron here underlines the relationship with the father, or the mother, depends on the letter. This may have been lived as someone who hurts and damages, or is inappropriate in some important aspect; perhaps the relationship has been extremely conflictive.

Perhaps the father, or the mother, was totally unknown, had died or left before the son was born. The variations are endless, but what generally describes the nature of the wound are the sign in which Chiron is located, and the aspects that it forms. In a woman’s letter, Chiron in House 4 may accompany the theme of an incestuous desire for the father.

Whether or not there is explicit sexual contact, “family romance” may have taken place between father and daughter, not between father and mother, and such a woman can continue repeating this model by always falling in love with unattainable men.

With Chiron at this site, our wound is inevitably related to the first maternal care and basic safety needs.

Many people with this location feel nostalgia for the mother’s womb, feel aggrieved by the expulsion from birth and are looking for a home, a sense of belonging and security.

With this location we can be forced to make a long inner journey to find our roots inside our own psyche, a journey that is imposed on us by the feeling of being exiled from human life.

Finally, the force comes from the intimate feeling that all life belongs to us and that we do not need to possess it, because we already have it.

They are constantly hungry and full of craving. And they are not too aware that they are actually starving in the midst of abundance.

They feel very vulnerable when they need to open up and receive a protective attitude towards them. They always feel like they have a tutor over their head, and that opens their childhood wounds.

From the inside, they just clench inside and make a shell of the stomach, the brain, and the heart. Physiologically, to people with Chiron in the fourth field or sign of Cancer, the vulnerable area is especially the belly, which can express strongly their strong emotions.

They literally translate their emotional need into physical hunger and usually start eating at the moment when they actually need emotional food. Let’s not forget that the sign of Cancer and the fourth field is ruled by the moon, which is nothing but emotion.

In some ways, these individuals, and due to the influence of Chiron, have disturbed the natural, cyclical rhythms of life that are certainly governed by the moon.

It would be very useful to monitor oscillations of one’s energy and, when they are hypersensitive, indisposed, biased or hateful, to contact neither consciously nor unconsciously.

People with Chiron in the fourth partner field usually have, or at least choose, always the kind and gentle people they are looking for and to identify and see exactly their needs.

The danger arises later, as over time they begin to envy the attention their partners begin to give to children or someone else who is in contact with them.

They begin to emphatically feel as though they are themselves, and again, somehow denied, not realizing that the person is simply such and not worth being possessive but, if necessary, directly telling them what their personal needs are.

These people are often the ones who want to or do not become jealous of their own children, and they fail to realize that they simply cannot own anyone.

The remedy could be, for example, choosing a profession in the teaching profession or working in institutions where others need help because these individuals can be exceptional caregivers.

Chiron, the wound and the healer, has a special effect on the emotional world of the human one. In his heart he feels an almost insatiable hunger Security and closeness.

At the same time, emotional closeness activates its created emotional wound; a reminder of being separated or alone; a painful feeling of emptiness.

The development of a genuine sense of belonging is difficult. He does have it the psychic knowledge of what should be unconditional security, yet he frightens Fear of rejection from allowing it for yourself.

These people but have an excellent talent to care for others emotionally and to empathize with others. They can be an “angel” for others and yet they feel the pain of her unfulfilled yearning for security. Especially this one Emotional pain gives them the gift, other security and acceptance to convey.

As a result, they can also be supportive when it comes to emotional to heal wounds of other persons. This emotional care for the others works at the same time healing for your own emotional wound. CHIRON in cancer and / or – in the aspect of the moon – and / or – in the 4th house

The effect of Chiron is on multiple exposure of moons energies (Cancer, Moon and / or 4th house) even more intense you feel in your innermost an almost insatiable hunger for security and nearby.

At the same time, emotional closeness activates your psychic wound, one Reminder of being separated or alone. That’s a painful feeling of emptiness.

With Chiron in Cancer, the mother may have been lived as someone who hurts us, because of some specific trauma or a sudden separation that has left us stunned and unable to understand what the hell happened.

It may be that we then conclude that we did something wrong, and that later we tend to be hypersensitive to disapproval.

Chiron’s wound in Cancer is the one that all humanity shares: that of the original expulsion of the uterus and the separation of the mother.

People with Chiron in Cancer are very sensitive to the emotional suffering of others, and are able to empathize with them, which makes it easy for people to express their feelings in their presence, especially pain.

If you have this site, you have the ability to emotionally nurture your neighbor and accept him when he is most vulnerable, without feeling threatened.

But your difficulty may be in relationships that do not fit the model of mother / child duality, in which you are extremely comfortable and that if you depended on it, you would not give up at any time.

He needs to be needed, and it is not easy for him to let others be independent. It is common for men with this location to spend at least the first half of their life “in the womb”: they choose women who are “good mothers” and even become jealous of the attention they devote to their children.

A divorce or separation can be a blow to them, because the original wound of the mother’s separation is reopened.

However, once they have reconciled with these characteristics, they are men who demonstrate an intense emotional capacity and a well-developed contact with their inner world.

The development of a genuine sense of belonging is difficult. Although Chiron lends the spiritual knowledge, what should be unconditional security, yet he awakens also deep fears of rejection or rejection.

You have one excellent talent for caring for others emotionally and others empathize. You can be an “angel” to others and yet feel the pain her unfulfillable yearning for security.

But this emotional pain gives you the gift to give others security and acceptance.

This can also be helpful when it comes to emotional wounds heal other people. This emotional care for the others works at the same time healing for your own emotional wound.