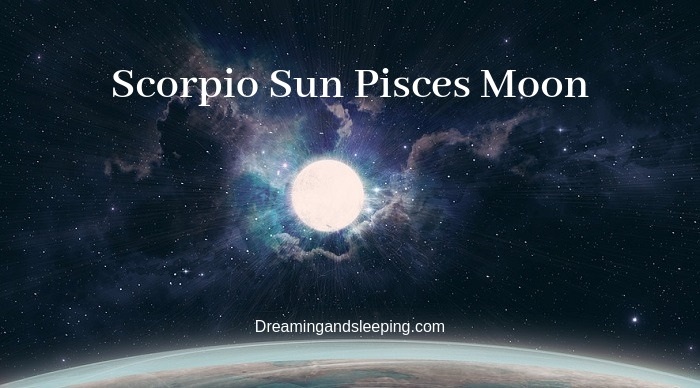 There is one interesting fact about the Zodiac signs – the names and characteristics of each symbol (sometimes called Sun sign, or star sign) are over 2,000 years old – this time was it believed that the Zodiac was primarily established and that all that we know today has roots in this “basis”.

In those times, people who dealt with planets and stars (the sky that they could see at that time) in general firmly believed that the Earth’s location was solidified in the Universe, and did not notice that the Earth is subjected to precession; the rotational and orbital parameters can change.

Today, people who deal with the planets and stars are called Astrologers, and they have all information about the universe, and they can make accurate calculations.

We will try to give you an accurate calculation of the character that has Sun positioned in the Scorpio and the Moon located in the last sign in Zodiac, the Pisces.

This is the person who when you first meet him has a very noble appearance, even seems dear, but he is not the person who is seen as relaxed towards the new environment.

But one thing is certain this person has great energy for things that find that are interesting to him, and in this sense, he can be very fruitful, he is able to realise his ideas and to direct his quest for knowledge in a positive way.

There is always something interesting in the life of this human being, and there is a constant exchange of communication and contact with a lot of ideas and projects when needed. He is the one that spends a lot of time in thinking and possibly learning, but only things that interest him very much, for others he does not have much time.

In the best case scenario, a human being with the Luminaries located in Scorpio and Pisces is a hard working individual who can successfully draw energy from higher sources. He achieves results with his intellect and a fantastic intuition; and even if he “works and lives” calmly and quietly; and seem sympathetically and somewhat distanced, his results may stay relevant a log after he is gone.

The negative aspect of this Astrological connection lies in the fact that this human being can be a dreamer who is completely unable to cope with failures, after which he is will not even try to do something, because he is uncertain in success.

In his life, in a certain time, many difficulties can lead to withdrawal, and then he becomes discouraged and remains in the same place for a long time, while easily losing power and energy.

In some other observation of this character, we can say that he struggles in the movements of consciousness and subconsciousness, and he often tries to reconcile with what he is or think he is to his surroundings.

In all of this, he rarely succeeds because he is hindered by strong internal shocks that are exhausting and – preventing him from preserving the lucidity necessary for their spiritual fulfilment (that he usually strives for in life).

When this happens, and it does, this human being falls into the vortex of confusion, spiritual chaos, and it spreads to its surroundings. No one is ok when this happens, so this is a constant struggle between all those who are close to him, but the most significant conflict is in his mind.

Regardless of what forces drive this human being with the luminaries located in the Scorpio and Pisces sign is his life successful or in the vortex of confusion, he always, without exception reacts very strongly to growth.

This Astrological combination gives him a fruitful imagination and a desire to draw from the world of the reason the world of ideas, as he imagined it- if the circumstances are right he may be able to make something meaningful from them.

In love, the key role has the Moon in the Pisces since this element gives him a dreamy, romantic tone to his strength (the Sun in the Scorpio).

In this sense, we must say that this human being is somewhat passive and often lives (and this applies to love area of his life) in opposition to his wishes: it attracts what he cannot have.

He can be involved and in love with the wrong people, but this is another story; because there is no doubt that this is somewhat passionate, mysterious and deeply seductive, but often confused, and that’s why he may act insecure in emotional relations.

When it comes to his behavior in love relations, we must say that there are the two powers of the two emotional natures that live inside of this human being.

But besides passion and love, they bring the sensitive unrest of his soul; and this is the characteristic that cannot be changed just because he wants it to change, but it takes a really special person to do that.

What also must be mentioned here is that in essence, this is the personality that does not fit into schemes, and he often times can be involved in relations that are unusual and controversial.

Because everything in him is subjected to inner passion, which makes actions and reactions of these emotional creature actions often incomprehensible in the eyes of others, but quite justified in the light of his impulses.

In the end, his lovers must be aware of one more fact – everything that he does is subjected to unconscious and instinctive impulses because he falls under the power of feelings and not of reason.

This is the person who is blessed with the intuition (nothing can miss him, and the things that he did not see, he felt them, be sure of it) and his visionary attitude are directly connected to the subconscious – this is the way that he chooses his lovers.

He let himself go, and let his inner feeling to speak to him, because he firmly believes that heart cannot do wrong; but the reality proves him wrong many times.

And the word of advice for his future lovers – he is the one that has many unclear and chaotic relationships with others, cause he can be under the impact of many illusions, and when things are not going as he wanted he can become an angry and jealous partner.

The illusion is one big risk for him in life, especially in the area of emotions where he can suffer because of the romantic nature of his fantasies that have no firm ground in reality.

The one and the only person who can deal with this complexed human being is the lover born in the sign Cancer – there is nothing superficial and shallow when it comes to the feelings of this human being.

Once it has true love, for him, it is forever. He appreciates the things he possesses and jealously keeps them – the attitude that suits to our candidate. The Cancer lover will deal with care and patience, and this is the attitude that is necessary for the one with the luminaries in Scorpio and Pisces.

Then he can become one partner who can love in reality, with all difficulties that life in two brings.

When it comes to friendships, this person is very sensitive towards people who are in trouble or in some kind of pain, emotional or any other.

In some unusual spiritual way, this person is very connected with friends who stay beside them through life, and he knows how to give that love back.

The most important to this human being is his privacy, and his friends must accept the fact that he is not the type of friend that will share his intimate secrets publicly; even if he is well aware of his friend’s secrets.

He is the happiest with happy people who are not dark (like he can be at times).

This is a nature that is difficult to understand if viewed exclusively through the prism of logic and common sense, cause this person is everything but that, of course, he can succeed if he manages to make his dreams reality.

The life of these Scorpions (with the Moon located in Pisces sign) is mysterious, with nothing ever clear in him, everything can be questioned and examined in some sense, but if he tries he can evolve into something else, something much grounded.

This is the person who is able to see the world that surrounds him, as one place that is an irrational and unexplained space.

Having said all this, we do not say that this type of person is not fascinating, even enchanting. He is one person, who is truly endowed with the sixth sense, and he belongs to the people who seem to have come from some other dimension – this is his major strength, because he already knows everything that he needs to know, so he is in the lead when compared with other people.

The tendency towards introspection, towards conscious research into the inner emotional and spiritual labyrinth, reaches an excellent level in this connection of two signs that both belong to the Water signs (the Sun in Scorpio and one in Pisces).

He is the one that has relentless nature, engrossed with passionate dreams, confronted with apparent contradictions of the real and imagined, this person is dissolved in this way, but he can make this “ability” into his biggest strength.