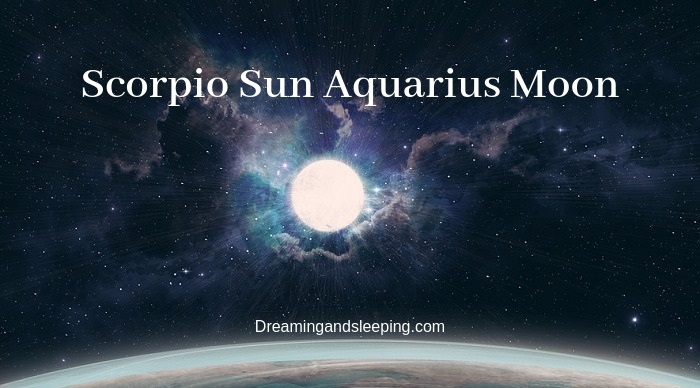 Modern times brought something completely different to the world of Astrology, and its meaning. Of course, we are talking about modern psychology, also biology and naturally about the astronomy – these are the sciences that develop in the way that they completely undermined the assumption that our characters are determined by Zodiac signs, or to be more specific the position of the luminaries (the Sun and Moon) or the planets.

But we assure you that given what we know now, and the movements of planets, luminaries, and in general the forces that govern the Cosmos, Astrology cannot be just a superstition, but much more.

All of this influence remains important and among them the luminaries; and in this pieces, we talking about the person who has positioned Sun in the sign Scorpio and the Moon in the sign Aquarius.

This sound exciting read all about this human being and the most important traits that are connected to him.

Passion and originality are married in this person, this is the character who works and thinks under the authorisation of originality, and in his life we are talking about the extreme originality, not like anything you have ever seen before, so he may not be understood easily, but he draws attention, that is for sure.

He has an open and spontaneous nature and is ready to realise his interesting ideas in a direct way, everything he does, regardless of how futuristic it can be, it is presented simply and engagingly.

He is such individual that he cannot be influenced by his environment and other people; even if he has the understanding and tolerance for others, but they cannot impose on him their ideas that are not his. He is a self-certain person who does not criticise others, but in the same sense, he does not allow others to criticise his life, work, or anything else that he does.

One thing needs to be said here – this human being with the luminaries located in the Scorpio and Aquarius sign hates any obligations, rules and regulations. But life is made on them, so is able to tickle them and for balance, he needs great physical and spiritual freedom – he has a great need for space and movement.

He is even seen as an eternal revolutionary who loves anything that is forbidden, but he is not conformist; above all he is such a brave person who must enter the campaign against injustice.

In some sense, all of his virtues can be at the same time see as his flaws, so this is the person who can be too independent, and it is impossible to close him in a cage since he wants to live his life in complete freedom.

But life has to have some rules, and if he does not accept any rule, he will remain alone, and without any support in life.

He is even seen as an eccentric who is ready to do everything to prove that he is so different from others, and by that, we mean that he is engaged in actions that are not, well usual and normal for the majority people.

However, even in these situations, he knows to take full responsibility for his way of doing things, but the unfortunate thing is that this attitude, occasionally leads to very rigid behavior, which can cause harsh internal conflicts, which is difficult to resolve, let alone understood.

Regardless of everything that we have said in the previous sections, the person with the luminaries located in the Scorpio – Aquarius connection, in fact, longs for a marvelous, powerful partner, for a person to whom he will be proud and who will understand him. This is the meaning of true love for this human.

He is full of love for everyone, although at first glance he seems unreachable and restless, and even may seem like he is never going to find an adequate lover.

He falls in love with humans who are witty, intelligent and with whom he will never be bored, but those who will not expect him for the best lover, friend, parent, etc.

When we look at things even deeper, he would love if he could be in love that will end in marriage with a lot of kids.

In love, he is particularly prone to intense gentle emotions, but often happens to be lonely, and in the short term he has offers from multiple parties, but this does not mean anything to him if he has not found the right one.

So, being with the person who has Sun in Scorpio and Moon in Aquarius means that you will be in a  dynamic, unconventional and adventurous relationship.

He is the one that lives life intensely, and fast, maybe too fast for the majority of people. He may seem strange to others because he often changes his moods, but there is no doubt that when he is acting confidently, and when becomes mature, he is even more sure that he has a point and that he cannot be with just right about anyone.

His lovers must be aware of the fact that the Moon in the Aquarius sign pushing this human being in the direction of being different, seemingly presenting himself as the one that is proud with his weirdness and individualism.

Sometimes, while in a loving relationship, he is an eccentric who does not care what others think (even his long-term lovers); he wants to do things his own, regardless of how much he will suffer because of his choices.

Let us cut to the solution of this problem- the perfect and the only lover that could be a good partner for the person with the (strange) combination of luminaries (Scorpio and Aquarius) is one and only Aries lover.

In the love combination, there is always a strong mutual attraction; passions are emphasised; however, there may be major disagreements due to the possible easier conflicts, but nothing alarming.

The Aries lovers want to control desire for stronger domination as well as the desire for more tightly controlling things in a love affair, and our candidate does not want to be controlled in any way.

So, if they manage to deal with these issues, this is a match made in heaven as Aquarius does not like the denial of freedom. He needs to get his freedom, and the Aries lover must have at least a feeling that he is in charge, and this will work really well between the two.

This human being acts the same in love, at work and of course in his friendships, he is the one that is a rebel in his environment, and he always finds a reason to fight against something, and often times those causes are struggles of his friends.

The good part is that his friends will still have someone who is ready to take the fight for an individual and common good, and this person is that one who takes this role with all of his heart.

There is no doubt that the one with the Sun and Moon located in Scorpio and Aquarius has enough personal attraction to attract other people, and he is such friend that he accepts all kinds of different people in his heart, regardless of what society thinks of them.

He cannot be friend with people who are narrow-minded or with those who try to suffocate him with the boundaries of any kind, and everything else is ok. Freedom and independence are principles that he will never give up.

Also, he works the best with those who are, just like him, very advanced in their thinking. Around him, there is always a float of mysterious and uniqueness – he adores people who are unusual.

His friends see him as a persistent seeker, the one that has a passion for knowledge and ambition to discover the unknown, but they are those who do not mind if he neglects them because of it.

To sum up the characteristics of a person who has Sun and Moon located in Scorpio and Aquarius signs, we will say that he can be defined with these terms: rebellion, openness, spiritual perfection, sensitivity to human problems and vitality.

He is the one that is among many others able to rise to a higher level of self-control, and his power is reflected in the ability to influence others with his sharp intuition (the Sun in Scorpio), and to change the world in which he lives in (the Moon in Aquarius), even if he had to change it by himself.

In the best case scenario, this person is able to replace anxiety with optimism, egoism with generosity; and to build up the energy that will lead him to the activities of the spirit, while his knowledge of the psychology of and human mind opens the doors of limited positions in the society.

He has the great need for orientation and the environment in which he will express himself in his creativity, for the people that are identifying to strengthen his personality.

In the end, the sure way of the success of this human being is in the case where he has close-minded beings that understand him completely, who love him and are never giving him up.

If it is the opposite, this is the person that will gain his freedom with many fractures and a lot of pain, and the worst part is that he will never be able to show how amazing he is.