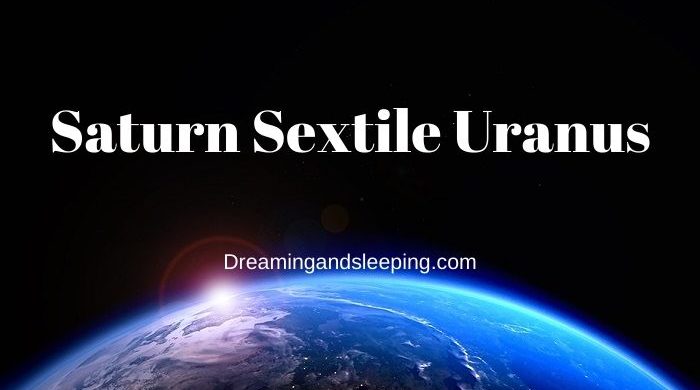 Astrology is, as those who understand and teach the basics of this science, the universal language of planetary symbolism, of perceptions, which defines expected events by its language of similarity of initial principles with what will develop from them.

In this way, collective and personal events are envisioned, and this is the reason why we always speak of a personal natal chart, and also of the global perspective.

And this perspective is changed based on the position of the planets, and the one that is generally seen as positive is the sextile position that takes 60 degrees between planets (besides the sextile, the trigon position is the one that brings mostly beneficial concepts).

This is the aspect that awakes out interest, and here we are looking at the sextile position between Saturn and Uranus.

Two planets that carry energies that are different, if not, oppositional one to another, but there is a way that all of this could work.

It is a known fact that the planet Saturn falls under the category of those planets that do not bring so much “good”, in a sense, even good qualities sound like they are not actually good, because there is patience, self-control, prudence, frugality, setting boundaries.

All of these could be put in good use – a person could control his negativity, and could set boundaries when they are necessary. Or they can go in their own extreme and make a life a misery.

On the other side, in the sextile position with the planet Saturn we meet Uranus, like the one that awakes, and his traits are seen as qualities, not disadvantages – originality in thought and action, speed in all deeds, and ability of the amazing and altering transformation, and in all of this, he comes as the opposition of Saturn – timelessness, rebellion, freedom.

You know that all people who have Saturn are some of the important houses in their natal charts must have some of these traits in their lives – they are rebels who want to live freely. 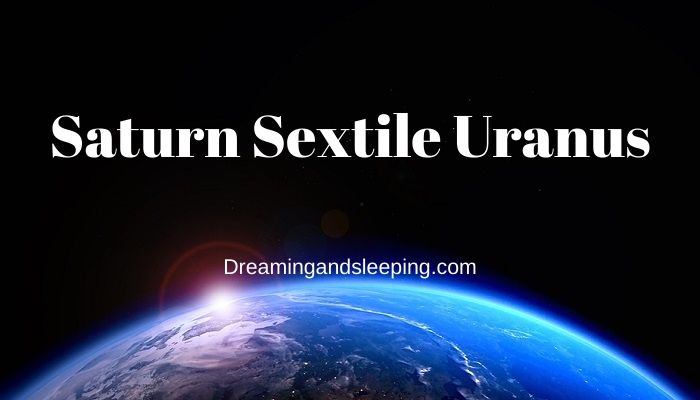 Since, the sextile position is seen as a positive one, in some cases when all of this is mixed into “one-pot” you get all or nothing.

They could live a life that is when needed free and without any boundaries, but it also reveals the traditional values when they are necessary; so the perfect balance could be achieved.

Some very interesting destinies, a bit controversial, but they are truly people whose talent is beyond measure.

Astrologers classify the planet Uranus as an external one, and this aspect is seen as the influence of the expansion of corporate consciousness rather than a distinct area of ​​life on a personal level, except, of course, when the lights are on the natal chart of one individual in question.

The communication among these two planets can be seen as a back-and-forth alliance between traditional and unique self-expression.

So, these people are able to be traditional in some ways, at certain stages of their lives or in some regards of their lives, and in others, they can show an incredible amount of uniqueness and personal qualities that will ensure a major success.

Of course, these two stages change and are coming back (maybe not in the same shape or form as before), and in the best scenario possible, they are able to make the best out of both worlds.

We must say, even this is such a common idea, that the balance, a true equilibrium is the only way they can get the best out of both worlds.

In good aspects, these people are, without a doubt extremely intelligent and in many respects, they are ahead of their time.

Interestingly, most people with these aspects are born at a time of radical social change in which they take an active role – or if you like it, this aspect is active when radical changes are occurring in the society in general.

Above all, they are very intuitive and fight for freedom in righteousness, they want to change the world we all live, and if they are responsible for it, they want the world to know it.

This sextile position combines well inspiration and disciplined logic – persons are logical, relate to the facts well and do not understand those who are “preserving” the brain and use only their emotions.

When a natal chart has other aspects that are not favorable, then problems can occur in the lives of those people who carry this aspect and nothing could save them from failing in some ways.

This aspect (mostly thanks to the planet Saturn) could be the representation of temptation, pain, limitation and discipline, on the way to gain greater awareness and fulfillment, wholeness and harmony, but it is not always possible to reach that goal.

What also must be said is that these people emphasize their individualism and belief that they know everything best.

Decision-making is cautious and compensates for insecurity, especially by authority, unless it is in conjunction when they seek approval for each move and casts doubt on his or her own inventiveness.

Their love life is if we want to follow the lead of this sextile is also a rollercoaster, since they are passionate people who love freedom, but they are adorned with some instability, which is in the symbolism of Uranus, while the structure itself has the solidity and security that is all Saturn.

In life, and love life also, they are able to move in different directions (Uranus), at different altitudes (Uranus), sometimes upside down (Uranus), has stages when it ascends (Uranus) and drops abruptly (Saturn). This means that they are able to make stable love connections that they will break down in a second, and move on as further as possible, or they can suffer so much that the entire path in front of them is slippery and dangerous (Saturn) ) but also unfettered (Uranus).

There is no doubt that people who have this aspect in their natal charts are able to learn so much and to invent, but the best success they make when they master the skill of making compromises.

Then, they become good contributors to large systems that, by their strict form and structure, give space for a person to turn some of his eccentric qualities into an advantage.

In addition, in some circumstances, the aspect also warns of the possibility of falling and breaking, but there is also the opportunity for a major growth that is beyond any comparison with the results that were before.

It is good to know that as far as a life purpose goes, this aspect could be used in the best way if actions, brains and plans are incorporated into one, all driven to the one idea of radically changing the world with the intention of implementing freedom and equality for all.

Now, what to do if you had this position in your personal horoscope or in times when you know that this positive aspect is active in the night sky? What is the best way to use this sextile between Saturn and Uranus?

Start from the notion that this transit can greatly contribute to the realization of the actions taken, as it can be more decisive in certain situations, which can also accelerate the achievement of certain goals or progress.

When you know where to look, this position can considerably provide to the attainment of your actions, as it can be more decisive in certain situations, which can also accelerate the achievement of certain goals or progress.

These aspects speak of the relationship between the new and the old in the person.

They also point to the need and ways of reconciling the individual and the collective.

Uranus has an endless pursuit of the destruction of every form and all forms, while Saturn is precisely that guarantor who preserves tradition, form and forms.

In practical interpretation, we always have authorities here that keep the old and the new forces that destroy the old.

Thus, the sextile of these two planets is always difficult for the area of ​​human life described by the house in which this aspect occurs, because in the person there is a conflict between the new and the old.

Therefore, a person is intolerant of mediocrity, invests in excellence, is constantly tense and unable to relax – if you are able to avoid this last and continue investing in excellence, then you are truly taking the best out of this sextile.

In the end, have in mind one thing – whenever this sextile position is active, some radical changes are occurring, or there is a preparation of the “field” for the changes that are about to knock on your door, or they are coming on a planetary level.