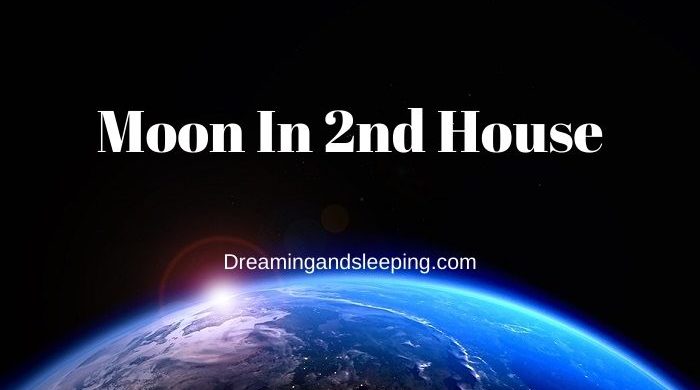 People with the moon in the 2nd house strive for financial security in order to feel good emotionally. They want a secure income and regulated conditions that give them stability, their home and their family environment.

They are passionate about transforming their home into an oasis of wellbeing that exudes a particularly warm and cozy atmosphere. The refrigerator is filled with many delicious delicacies. The well-being of the family is well taken care of. They are very domestic and also like to work from home.

Moon in the 2nd house longs for harmony and security! They have a knack for business matters, especially in the areas of food, accommodation and property.

However, they are often confronted with fluctuations in their financial or material situation, which lead them to fall from extra generosity to extreme economy, and at the same time their views on certain values ​​change just as easily.

Those who have the moon in the second house have an essential need for material and financial security. The emotional well-being of an individual often depends on certainty. People may feel more secure when surrounded by the material things they possess.

When the moon receives stressful aspects (square and opposition) indicate unstable and unsafe growing up, the person did not feel safe and protected.

The house where the moon is located is a place where we express our emotional needs and want to receive care and emotional help and support. These individuals feel safe when they have money and material security, as well as owning property.

These persons are related to their family, and most of all to their mother, except when the moon is a flick and the sun is stronger than the moon (then the father has a stronger influence). A mother is a woman who owns a lot of material things, loves to keep her possessions.

When the moon was not afflicted, they had a careful and secure growing up. If the moon is afflicted it indicates persons who have an unstable relationship with the family. These individuals did not have a carefree childhood. 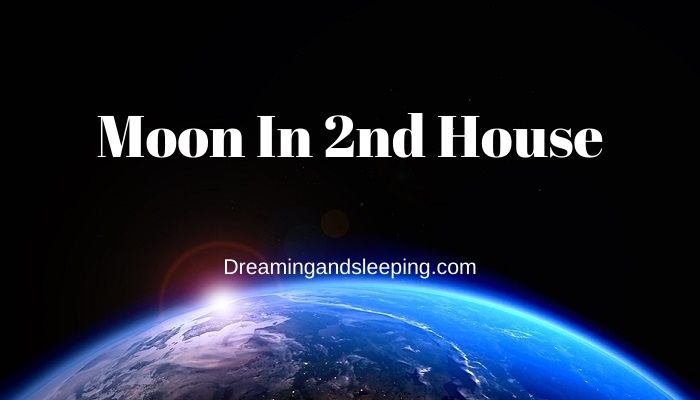 With this position, money can be earned through caring for others, preparing food or tidying up the house, as well as through all the sciences that deal with the past and through a music career, in case the moon receives good aspects from Venus and Neptune. For a deeper analysis of what anyone will do, look at 10th house, 6th house and Mc point.

As soon as they feel threatened in their existence, they fall emotionally into a deep hole and are seized by uncertainty.

They then appear particularly fickle in their emotional world. With a challenging moon position, they may consider their lives to be hopeless if they have to deal with money difficulties for a longer period of time.

So you absolutely need a secure feeling and stability in your life. This applies not only to financial and material matters, but also to interpersonal areas.

Therefore, these people hold onto property as well as their partner. They tend to cling to him for fear of loss or fear of change.

On the other hand, they are particularly caring and motherly towards their loved one.

They are usually very deeply connected to the family. They are also very sociable and like to cultivate communities. They are rarely found as hermits or as convinced singles.

Such people simply cannot part with certain things, the same applies to objects with which they associate a certain memory or emotion, and at the same time they also know what they own, emotionally and materially.

In this way, if they feel safe, they can transfer their satisfaction to their surroundings and convey a positive feeling.

People with a moon in the second moon need a lot of security and, above all, good existential security for their inner peace and balance.

They are also people who know how to enjoy the beautiful things in life.

It is a particular pleasure for them to be able to share this with their partner or family. Your emotional life is particularly sensitive to sensual sensations and experiences.

Challenges of Moon in 2nd House

We continue with the series of the meaning of the moon in the horoscope, depending on the house in which it is located.

Today is the turn of the second house, which is traditionally associated with money and material wealth, but this does not lead you to error, my dear … the second house is much more.

Naturally it is linked to the sign of Taurus and the stage in which the baby begins to become aware of his own physique and his own identity. It’s what you have, what you’re worth, what makes you be … And that’s not always money.

It tells us about what we need to have in order to feel valuable and safe. And the truth is that it is often about money, but not only … And better that way! Existence is very sad when what you value most are the things that can be bought.

The moon at home 2 causes the native to feel a strong need for security. Money is very important for them, and also to have a good house to shelter, a nice car to go for a walk and clothes of good cut and tested quality. But it is not the only thing they value…

On the other hand, since the moon is cyclic, it is possible that these natives also see money “in cycles” and alternate streaks of capital inflows with others in which they will have to tighten their belts a little more. In addition, they are those that are given to spending to alleviate emotional deficiencies.

In other words, they are able to go shopping and melt the credit card if they have had a bad day. In this regard, they should cultivate self-control so as not to get upset.

During the days that the moon transits your second home you will seek to feel safe and you will not be eager to take many risks.

You may feel certain consumerist impulses and be tempted to go shopping or notice hunger attacks that are really only due to an increase in your level of anxiety. Reflect on what is important to you and do not try to replace internal deficiencies with external resources.

In the family as well as in marriage, this individual likes to be assigned the role of “bookkeeper” when it comes to managing home budget money because she loves to determine the purpose of spending money and to be in charge at home for all monetary matters.

She is also very comfortable with the freedom to make personal choices when styling a home / apartment, since the activation of her mental bliss is significantly influenced by her stay in a place that satisfies her aesthetically.

For the achievement of emotional stability, it is very important to have material security, so for this reason, the desire for greater security and property can be more present, most often in the second half of life, greater emphasis is placed on acquiring and / or increasing wealth and waking up interest in acquiring real estate as well as wishing for some inheritance.

On an emotional and loving plane, this person strives to be gentle, sensitive and romantic and very reasonable and realistic, which means that he is able to be very fond of someone and fully commit to that love relationship, but not allow emotions to be too much they lead through life but to strive to control their feelings and to make decisions in love in important situations with their heads, not their hearts.

So, he tries to give priority to his mind at important moments and to keep his emotions as stable as possible.

The moon in the second house primarily reveals the emphatic need to achieve firmer emotional stability, which can contribute more to preserving mental bliss.

Emotional stability often contributes to a prudent and common sense perception of reality in which it exists, so that in some situations where the person feels greater emotional imbalance, a distorted picture of reality can be noticed.

The lunar position in the second house, which is an earthly and subsequent (successive) house, can often suggest that this being is of a stable character, possesses a realistic outlook on life and is oriented towards the practical side of life.

As for the financial situation, it can be very turbulent and full of ups and downs so that the realization of the idea in this field of life can be slow and gradual and therefore may require significantly more effort and patience.

The potential for gradual development of earning capacity and the acquisition of satisfactory material wealth is mainly present.

Often there may be a characteristic and stronger need for further development of personal values ​​and qualities with an emphasis on perfecting creative abilities.

Often, artistic talent may be present and, with a willingness to work harder and work, can be utilized throughout life and practically (satisfactorily).

This position of the Moon is indicative of good satisfaction in dealing with areas / professions in which a good reputation is appreciated, such as the following public professions: singer, presenter, lecturer, etc.

If there is enough interest in such a thing (which is significantly influenced by other relevant factors from a personal horoscope) in one of the mentioned occupations a person can very effectively convey with his talent and evoke emotions and animate the public.